The celebrity pair make nice during a sprawling interview on celebrity, creativity and classism 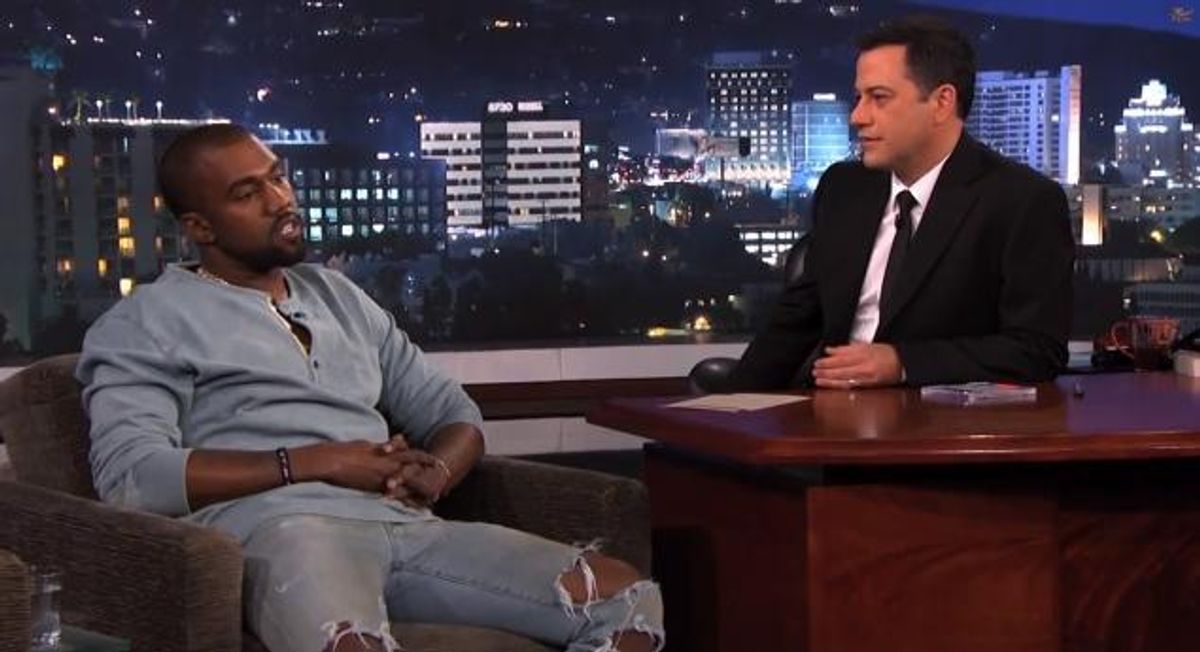 Kanye West and Jimmy Kimmel reached something of an understanding Wednesday night during a long (a really, really long) interview about their so-called feud ("These egos can flare up and we kinda just took it back to high school for a little bit"), Kanye's view of himself ("I'm a creative genius and there's no other way to word it") and Kimmel's view of Kanye ("A lot of people think you're a jerk").

The full interview, clocking in at around 25 minutes, is posted below, but here are a few excerpts:

Kanye on being a creative genius and not "just a celebrity"

I'm not running for office. I'm just here to make good music, make people feel good when they hear my music. And you know, when I did that interview, I was really vocal about a lot of things that' I'd been dealing with over the last ten years and I was put in the classification of "just a celebrity" because, you know, for me, I'm a creative genius and there's no other way to word it. I know you're not supposed to say that about yourself, and I say things the wrong way a lot of times and my intention is always positive. And I want to bring more things to the world, I want to help the world, I want to make people's lives easier.

Kanye on how he antagonizes the media on purpose

Kanye on why he will never stop believing in himself

People don’t stand up and protect their dreams, people are too scared of getting spoofed in a way. The irony of it is, think of a creative person at school, when you picture them you’re picturing someone all the way back of class, sketching and maybe getting beat up. And this is the reason why I did this, because creatives got beat up my entire life, and there was moments I stood up to drug dealers in Chicago, I said you can’t have my publishing, come and kill me, do what you’re gonna do but you’re not gonna bully me, you’re not gonna stop me, because my mother made me believe in myself.

No matter how many people tell me "stop believing in yourself, stop saying what you can do, stop affirming what you can do and then completing that in real life. That's the improper way to do it." I refuse to follow those rules, and the way that society is set up and the way that they control people with low self-esteem. With improper information, with branding, with marketing; I refuse to follow those rules!

Kanye on the classism he says he experiences

My grandfather drove the first cars in the marches just to get clean water, and one of the parallels I want to do for you is ... Richard Pryor always just wanted a clean plate, he just wanted to serve his stuff up on a clean plate. So if I do an interview in W Magazine and they take all these classist shots at me -- because it’s not about racism anymore, it’s classist. Like Paula Deen, she was old school, we don’t do it like that anymore, we’re classist. So the classism is what they try to do is to say, "You’re a rapper or your girl’s on a reality show, so you’re not up here with us, we’re old money." I’m not into all that snobbery, because we have the loudest voice, we have the loudest communication, and all we want to do is make awesome stuff.

As you can see, a lot of ground was covered. Watch the full thing here: