To defeat the Tea Party, the left needs bolder leader than Hillary

The right's tactics won't change. Democrats need a 2016 candidate who fights differently than Clinton and Obama 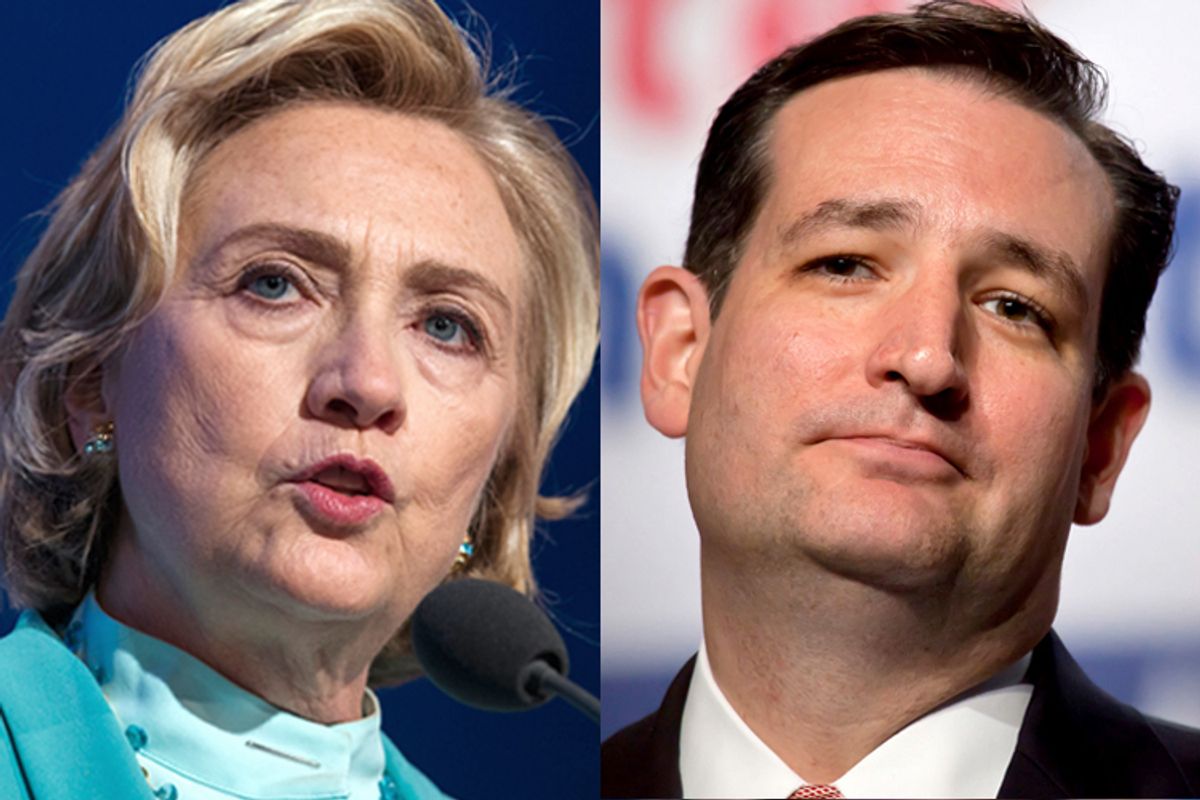 It’s three years away, but the ongoing government shutdown and debt ceiling debate makes it clear that Democrats need to be thinking now about a candidate able to effectively counter the Tea Party caucus in Congress -- which thanks to gerrymandering, isn't going anywhere until 2020.

RealClearPolitics finds Hillary getting 61 percent of the vote in a Democratic primary against Joe Biden (11), Elizabeth Warren (7), Andrew Cuomo (2), John Warner (1) and Martin O’Malley (0). There is a SuperPAC (with 1,000,000-plus Facebook “likes”) designed to lay the groundwork for a Clinton presidential run.

There is certainly a strategic reason for Democrats to play down Clinton: three more years under press scrutiny will only make her less appealing. But there are other reasons to question whether America needs another Clinton presidency.

I remember asking a Republican friend over dinner to name a single policy of Bill Clinton that they opposed and seeing them stumble (oral sex in the Oval Office isn’t a policy). The left has far more to despise about Bill than Republicans: he deregulated the banks, thereby setting the stage for the financial crisis; he passed the Welfare Reform Act of 1996, shredding the social safety net and forcing many poor women into the workforce; he signed into law economy-crushing free-trade agreements without environmental or labor protections; he escalated the War on Drugs, flooding American prisons with poor blacks and funneling billions to law enforcement agencies that abandoned practical policing in favor of SWAT-like tactics.

Hillary is not her husband, but there is reason to fear her presidency would devolve into the same govern-by-polls center-right market-friendly neoliberal toxic sludge her husband dumped on the left.

The left must ask itself some crucial questions: Could Clinton really tackle inequality by strengthening unions, raising the minimum wage and instituting a highly progressive tax system? Could the a member of the family who rented out the Lincoln bedroom to donors really tackle campaign finance reform? Could the woman who made the case for Iraq keep us from the next neo-con fraud?

Will Clinton's work undermine the overwhelming power of corporations and regulate the big banks that have financed her campaigns? America doesn’t need more establishment candidates; we need a fearless leader who will turn us away from the greedy consumerism that is tearing apart our society, in favor of empathy and sustainability.

This isn’t to say that Hillary Clinton would make a bad president -- simply that she would be another centrist establishment candidate at a time when the country needs much more.

Democrats used to stand against big banks and big corporations and stand for the little guy. Democrats used to talk about expanding social security, not cutting it. Democrats used to regulate big banks, not suck up to them for campaign cash. George McGovern may have gotten trounced, but at least he knew a shitty war when he saw one. Michael Dukakis may have lost to H.W. Bush but at least he defended the rights of prisoners. Bill Clinton flew home to Arkansas during the 1992 primary campaign to oversee the execution of a mentally ill prisoner.

Has the left been so castrated that we run directly into the arms of the most banal corporate candidate without even considering the possibility of Warren or even a Bernie Sanders? The first has fought tirelessly for a higher minimum wage and a new Glass-Steagall. The second has spent decades tacking on amendments to bills and the Constitution (among his goals: protect undocumented workers, undermine the Patriot Act, and strip corporations of First Amendment rights). They both would have passed a financial reform bill with actual teeth and guaranteed a public option.

It’s time to move away from the “New Democrat”/Third Way-style of governing. Americans are thirsty for real change. Dukakis and McGovern lost because they tried to sell peace to a war-hungry society. Now Clinton and Obama are selling neo-conservatism to an America ready to cede control to the international arena. We need a new New Deal, with full employment, strong unions and a powerful role for government. We need to question whether brutal free-market capitalism will erode liberal democracy, whether the short-termism of greed should be replaced by a sustainable economy. Can Clinton legitimately lead such a radical re-envisioning of American society?

Democrats can be fairly certain that they’ll win the Oval Office in 2016; the only question is which Democrat will hold that office. Should it be the establishment candidate to the right of Obama or someone truly revolutionary?

I’ll conclude with the words of the always blunt Christopher Hitchens, “Indifferent to truth, willing to use police-state tactics and vulgar libels against inconvenient witnesses, hopeless on health care, and flippant and fast and loose with national security: The case against Hillary Clinton for president is open-and-shut.”