Chiwetel Ejiofor on "12 Years a Slave": "I feel connected to the history, to the reality of it"

Ejiofor and costar Michael Fassbender talk to Salon about the Oscar frontrunner, and about racism around the world 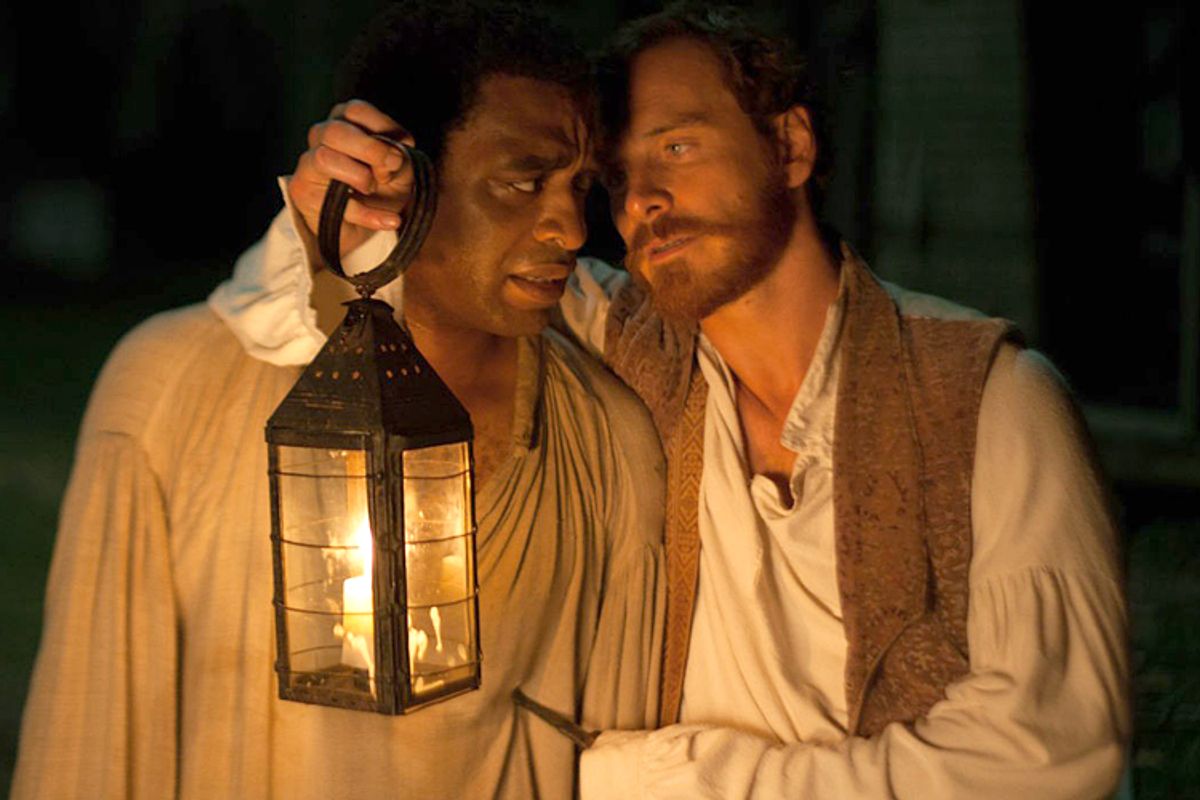 This could be a watershed year at the Oscars for films depicting black characters' lives. This year's already seen the release of American-made dramas "Lee Daniels' The Butler" and "Fruitvale Station"; Barkhad Abdi is considered a frontrunner for a best supporting actor nomination as a Somali pirate in "Captain Phillips"; a biopic depicting the life of Nelson Mandela is forthcoming in November.

And amid all of the likely African-American nominees for an awards ceremony that's traditionally been largely white, one film stands out as not merely the best of the year but one of the best ever made. "12 Years a Slave," which opens on Friday, manages to transcend the conversation about the number of potential black nominees for the Oscars and to compel attention solely on its own merits. While this film is certain to receive more coverage than most because it's been perceived as an Oscar frontrunner since it first screened, it seems almost ghoulish to walk out of the film thinking about awards.

The film depicts the struggles of Solomon Northup, a free black man kidnapped by traders and sold into slavery; his servitude, as he's transferred from owner to owner, brutally beaten several times over and witness to yet greater cruelty, comes to feel both entirely specific and emblematic of the horrors of American history. So it's all the more surprising that the film is directed by and stars Europeans; director Steve McQueen and star Chiwetel Ejiofor, who plays Solomon, are both British, and Michael Fassbender, who plays Solomon's captor Edwin Epps, is German and Irish.

Ejiofor, for his part, wasn't troubled by the attempt to tell so specifically American a story. "My heritage is that I’m Nigerian, and hundreds of thousands of Igbo from the east were taken out of Nigeria and brought around the globe, but specifically to Louisiana and the south of America, so I feel connected the experience," he said. "I feel connected to the history, to the reality of it. I feel that once we – if we’re constantly trying to separate each other then we’re missing the point."

"I didn’t feel that there was something illegitimate about me telling that story," said Ejiofor, "in my own background or in my own heart. If I did I wouldn’t have done it. And I don’t think Steve would have directed it."

The actor speaks in the measured tones of a potential Oscar nominee; asked about whether there are systemic blocks to telling stories about the black experience, he allows that things have gotten more equitable on TV, then adds, "The only thing I’ve been concerned about is where there have been sort of unnatural blocks to things. Where people have decided that certain things won’t sell without really testing whether they do, and those kind of blocks are not useful."

He's as measured about how race has affected him personally and in his career -- though widely acclaimed for performances in films including "Kinky Boots," "Children of Men," and "Love Actually," "12 Years a Slave" has already bestowed by far the most mass recognition Ejiofor's achieved in a long career. "I don’t really give a shit if somebody says something about me," he said. "I couldn’t care less. If they’re trying to harm me physically then well, we’ll all know about it but – the incidence of ‘this person looked at you funny’ or ‘this person followed you around the store’ I don’t care about it in the slightest. What I do care about is when societies affect the lives of some of the population and they affect them in different ways. And they affect them in negative ways. That where you start to feel, hang on, this is impacting people’s lives in the real world."

"Once you get to be a man," though, Ejiofor noted, "the small incidents of racism are unaffecting."

Fassbender, the German-born star who plays Ejiofor's character's owner, noted that Europe had worked out many of the issues America still grapples with. "America is such a young country and with that it has all the promise and hope and the land of opportunity and people can really start at the bottom and make whatever they want out of their lives if they put the energy in and luck and anything else alongside it," he said. "I think it's an extraordinary place. But you know, I guess we just have a longer history of beating each other up in Europe and wars and whatnot." (He noted that, in Europe, people of Romani descent "get the rough end of the stick.")

The actor last worked with McQueen on "Shame," a pitch-dark movie about sex addiction with very little traditional uplift; "12 Years a Slave," it spoils nothing to say, finds more good in human nature than did "Shame." Of the early screenings, Fassbender said, "I felt a great feeling of togetherness, people hugging each other, people who didn’t know each other holding hands at the end of the movie. A real sense of hope is what I felt, and a real sense of love, and a calling for us to do good things for each other, in a very basic way, to be a positive influence on your neighbor or your friend and realize that as human beings we’re frail and we need each other." That "12 Years a Slave" gets the point across fairly brutally -- it's not always easy or uplifting viewing -- makes its status as an Oscar contender all the more notable.