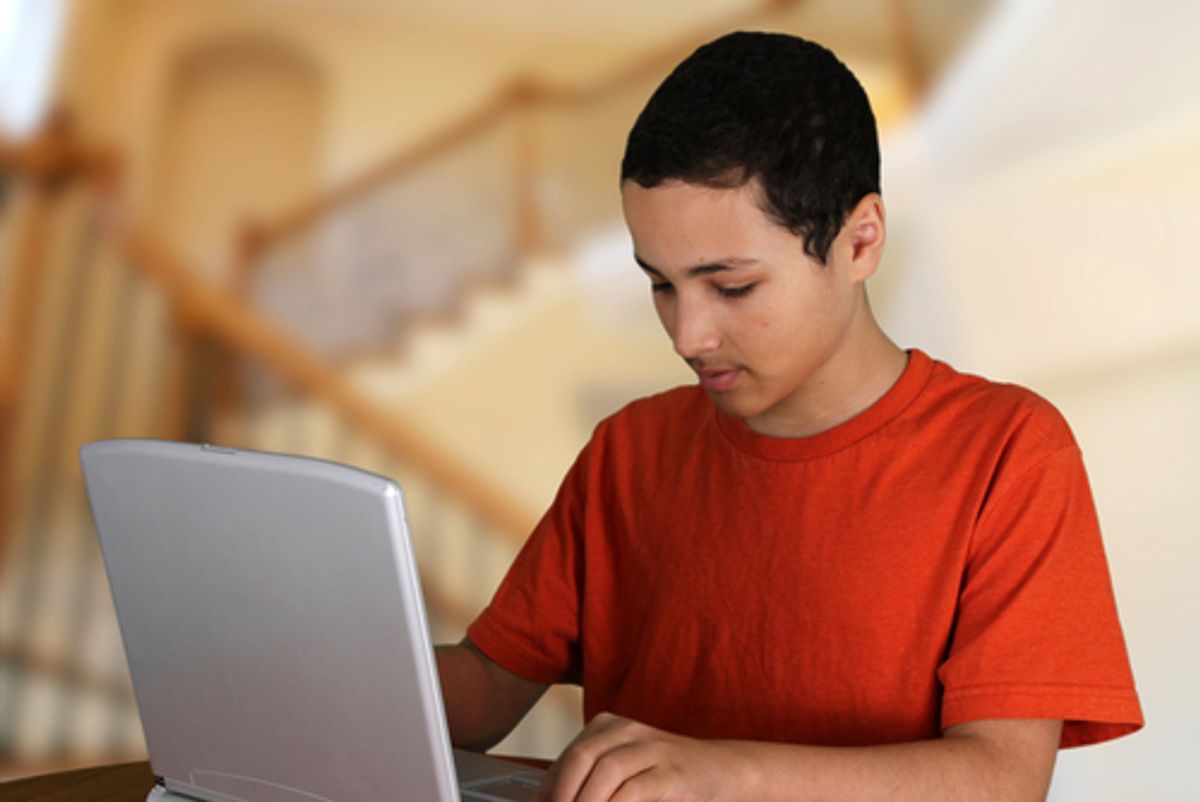 Sandy Hellebrand was concerned. She needed to find a school that could educate her son Gabriel, who has autism and was about to enter high school.

Hellebrand thought she had found the perfect solution: She would enroll Gabriel and her two younger children in Sky Mountain Charter School, one of a rapidly-growing number of virtual schools in California and across the country.

After all, she reasoned, the school would provide excellent online instructional materials and instructors to guide Gabriel’s individual needs. Since Sky Mountain is a publicly funded school – although not a traditional brick-and-mortar one – the state of California would pay for her children’s education. And Hellebrand and her husband Rob, a public high school teacher, would receive about $1,800 a year for each of their children to help defray their costs of educating them at home.

“The idea is fantastic,” she says in an interview with Frying Pan News. Hellebrand, who lives in Oak Hills, in the northern high desert of San Bernardino County, ticks off the benefits of virtual schools and the education specialist she knew Sky Mountain would provide for Gabriel: “The resources, the supplies, another brain and another set of eyes. It gives the ability to tailor [an education program] to each kid.”

The only problem was that Sky Mountain never accepted Gabriel.

“We have received your Student’s Enrollment Application, and are honored that you are considering our school for your child’s education,” Sky Mountain wrote the Hellebrands in February 2012. “Unfortunately, we were not able to place your student with an Educational Specialist for the school year.”

Hellebrand says that this was just the latest brush-off Sky Mountain had given her efforts to enroll Gabriel during two years and believes Gabriel’s autism played a role in the school’s decision.

“I feel very disappointed and burned,” Hellebrand says. “It’s a school that takes tax money. If you do that, you need to serve the community. I don’t know how they can pick and choose like that.”

When asked about Hellebrand’s comments, Randy Gaschler, founder and president of Innovative Education Management, which manages Sky Mountain and other virtual schools, said he didn’t have the specifics on her son’s case. Gaschler denies his schools bar students with disabilities.

“We don’t have any sort of policy like that,” Gaschler says. “We have hundreds of special-education students in our schools. We do everything we can do to make sure we are in compliance. We don’t deny any student admissions to our schools because they are a special education student.”

According to the National Education Policy Center, there are 311 full-time virtual schools nationwide with an estimated 200,000 students. Supporters claim online schooling will revolutionize teaching and learning, reducing the cost and increasing the availability of high-quality education. Virtual education has grown rapidly over the past decade to become an integral part of the education reform movement.

It has also emerged as a tool of choice in the bitterly partisan campaign to privatize education. One key player in this campaign has been the American Legislative Exchange Council (ALEC), a corporate-controlled generator of far-right legislation, including Florida’s controversial Stand Your Ground gun law and a 2012 Michigan law that hobbled unions’ ability to collect membership dues. The expansion of virtual schools has been made possible by numerous bills passed by state legislatures across the country and has been fueled partly by ALEC. According to the Center for Media and Democracy, ALEC-crafted legislation promoting virtual schools has been adopted in Tennessee and Florida.

Virtual education has many formats. They include full-time kindergarten through 12th grade schools, as well as single courses that allow students to explore a subject not available in their brick-and-mortar schools – say, a high school student who wants to take calculus in a rural high school that doesn’t otherwise offer the subject.

Sandy Hellebrand’s disappointing experience with virtual schools is far from unique and questions are increasingly being voiced about the performance and accountability of virtual schools. Adequate Yearly Progress – or AYP – is an accountability measure required by the No Child Left Behind Act of 2001 that determines how every public school and school district in the United States is performing academically. In California, only six of 31 virtual schools met the Adequate Yearly Progress measure.

Interviews with people who have studied the performance of virtual schools have revealed concerns about their performance and accountability, and about whether some of their operators are making big profits while failing to deliver a good education. Particularly damning are charges that such schools either refuse to accept children like Gabriel Hellebrand or troll for disadvantaged students in order to pad out enrollment.

“The virtual schools are gaming the system,” says Gary Miron, a professor of education at Western Michigan University whose expertise is evaluating school reforms and education policies. “They get [public] funding based on the number of students they get in the door. Then many of these students struggle and fail and leave.”

Miron was one of the authors of an exhaustive 2013 study of virtual education published by the National Education Policy Center, an influential research center located at the University of Colorado, Boulder.

Luis Huerta, an associate professor of education and public policy at Teachers College, Columbia University, says that in their efforts to drive up profits, many cyber schools target high-risk students who will benefit the least from a virtual education.

“The existing structure simply does not work for high-risk kids,” he says. “They demand the least in services. That yields the highest profit margin for providers.” In other words, some virtual schools covet high-risk and inner city students because they bring in revenue from states while typically requiring fewer teaching resources.

“Across the board, we found very poor performance,” says Miron.

“Some students are being served really well and find [virtual schools] a lifeline,” says Patrick, a former director of the Office of Education Technology at the U.S. Department of Education. “Some are not being served well. The programs not doing a good job should be shut down.”

She adds, “We are calling for highest measures of accountability and performance metrics that look at outcomes based on individual student learning.”

In most states, virtual schools are funded at a similar level to that of traditional brick-and-mortar public and charter schools.

Luis Huerta and others say there is a need to examine whether those funding formulas are fair – or whether they unduly enrich the operators of virtual schools.

“There’s a significant difference in overhead in running a traditional brick and mortar school and running a virtual school,” says Huerta.

Nearly everyone who has studied virtual education agrees on two points. Virtual education, in some format, is likely to expand in the years ahead. And as it does, there is a crucial need for better research, accountability and transparency.

“It’s an exciting model that not going to disappear,” says Miron of Western Michigan. “We need to stop the growth so we can figure out why performance is so bad, and so we can get the right funding and accountability [mechanisms] in place.”