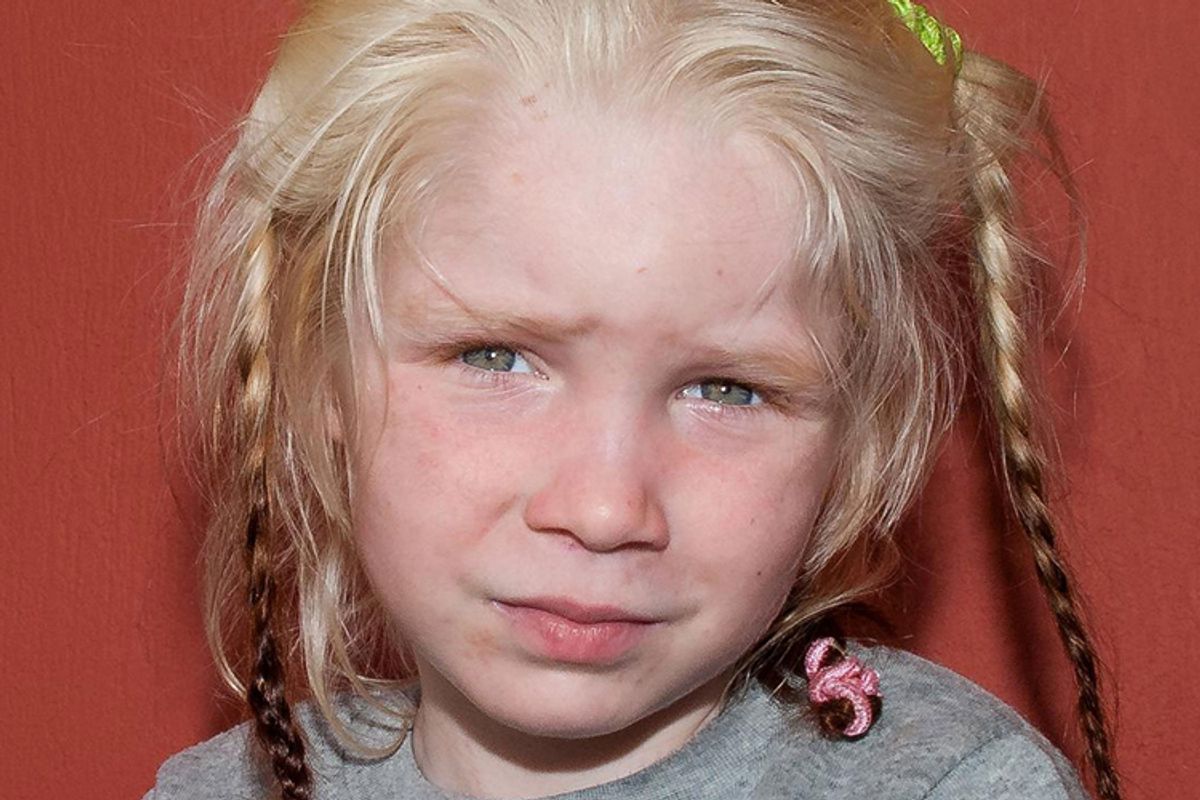 The four-year-old girl located near the town of Farsala, central Greece. (AP)
--

The narratives are similar, and timed remarkably close together. But the outcomes have been completely different. Had it been only or the other, it'd be a lot easier to draw simplistic conclusions. Instead, what happened this week in Roma families in Ireland and Greece has only led to more questions.

In Greece this week, a fair-haired, blue-eyed little girl known as Maria was discovered in a Roma camp in Greece after police noticed her during a camp raid for drugs and weapons. DNA tests subsequently revealed that the 5 or 6 year-old child, quickly dubbed the "blonde angel" in international media, is not related the couple she had been living with. In photographs, Maria's long braids appear much darker at the ends, suggesting her hair may have been dyed at some point to conceal her identity. Greek officials say her caretakers, Christos Salis and Eleftheria Dimopoulou, had fake registrations claiming several children born in a ten month period, changed their story about how they obtained Maria repeatedly and had a false birth certificate for Maria. But the couple insists they acquired the child in an informal adoption from a Bulgarian mother. Maria is now the subject of a worldwide hunt for her biological parents, and the couple, have been formally charged with abduction.

The case has shed light on what some are calling a serious human trafficking problem in Greece, where, as the BBC's Mark Lowen reports, the country's lax "prevention and prosecution" systems mean children are "subjected to forced labor, sex-trafficking or sold to couples, in Greece or abroad, in illegal adoption schemes." But it has also reinforced age-old stereotypes about child-stealing.

Roma peoples remain among the most vilified groups in all of Europe. They were targeted by the Nazis as "racially inferior" and exterminated by the tens of thousands. More recently, France has come under fire from the United Nations for its push to entice Roma persons to leave the country. Earlier this month, Daily Kos reported on Sweden -- where a large population of blonde, blue-eyed Roma live -- and its Roma registry, a throwback to what used to be known as its "gypsy inventory." In Kosovo this week, the parents of a Roma family that was deported from France earlier this month – including a 15 year-old girl who was forcibly taken from her school bus – were beaten by a group of unknown assailants. The mother was sent to the hospital for her injuries. And this past Sunday, the New York Times asked, "Are the Roma Primitive, or Just Poor?" In that article, Dan Bilefsky wrote about an explosive recent trial in France over Roma children who were trained to steal – one in which the defense argued about crime in terms of "following age-old Roma traditions and generally operating outside the norms of society."

And then there's the other story, of the other child. As in Greece, in Ireland this week, a blonde, blue-eyed girl was taken by authorities from the Roma family she was living with. Police, acting on an anonymous tip, descended on the child's Tallaght home. There, they noticed that the name the couple call her and the one on her passport don't match, and they took the child into custody. But subsequent DNA testing revealed that the couple she was taken from are her biological parents. She was removed largely because her parents are Roma and because she didn't look like them. Meanwhile, in the wake of the discovery of Maria, authorities in Greece have carried out more sweeps of Roma camps there, and further raids have been done in Spain, Italy and France.

Today one child is back with her parents and another remains an enigma. So is it dangerous racial profiling to question the presence of a fair child in a Roma family? Does the outcome of the investigation change the answer? The two stories reveal in different ways the complexity of the issues surrounding Europe's Roma communities, which exist largely outside the parameters of official documentation. Human trafficking is real. Profiling and hate crimes are real too. The investigations now taking place are only going to ramp up. They are to some an inevitable response to reports of child-snatching and a "witch hunt" to others. And in a situation with so many mysteries, the victims of exploitation are not always clearly defined.