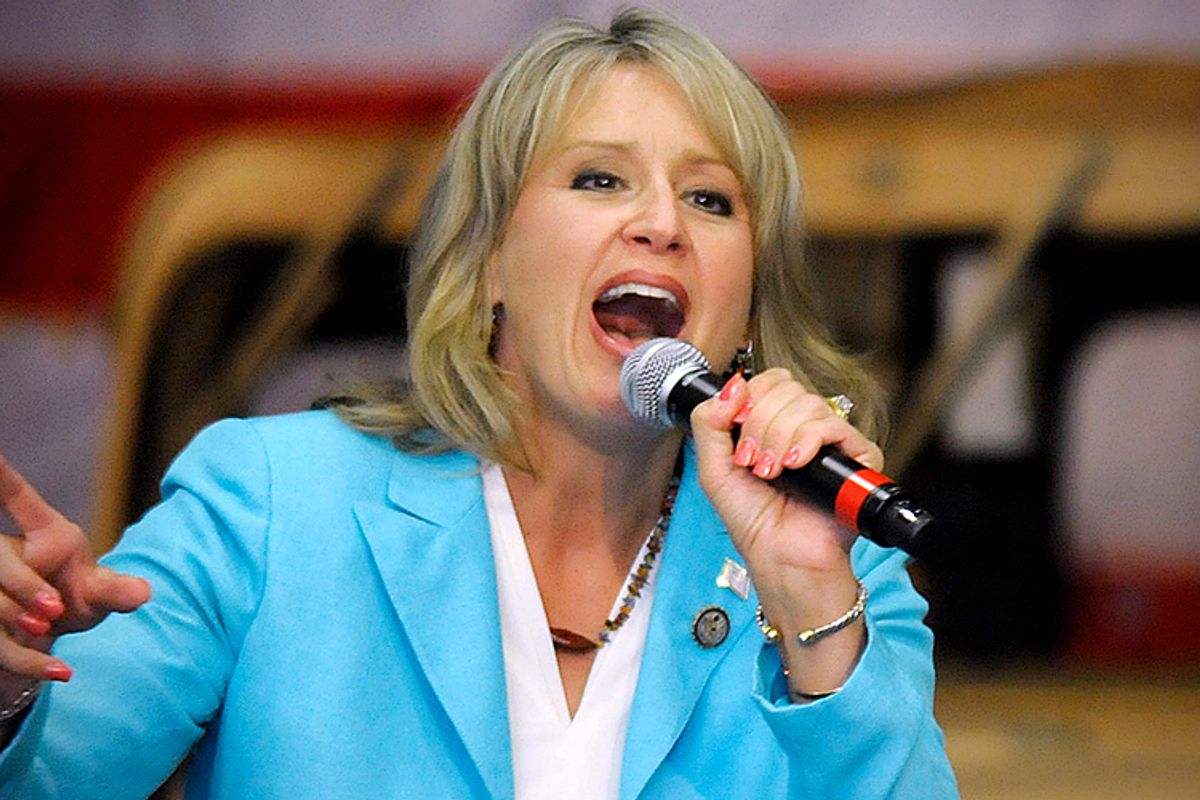 In a sane world, when Rep. Renee Ellmers asked rhetorically last week “Has a man ever delivered a baby?” she would have been arguing not against, but for the Affordable Care Act’s requirement that men and women pay the same insurance premiums. After all, the special physical burdens borne solely by women to ensure the life and health of the next generation obviously benefit both genders, right? Healthy men today can thank their mothers for eating well and getting good prenatal care; likewise fathers are grateful to the mothers of their children for the same. (Michael Hiltzik runs down the case for sharing those costs publicly here.)

But no, Ellmers asked that question of Health and Human Services Secretary Kathleen Sebelius in order to rail against the ACA’s equal premium requirement. She thought it was a clever “gotcha” moment, designed to show the craziness of requiring all insurance policies to cover maternity care and contraception without a co-pay. (The doofuses at Breitbart agreed, declaring “Ellmers brings her A game.”) Amazingly, Ellmers chairs the House GOP’s “women’s policy committee” – so how could she be so tone-deaf in attacking the way the ACA helps that increasingly elusive GOP constituency, female voters?

Because the right-wing base of the modern Republican Party is dedicated to restoring men as the head of the household, and the nuclear, husband-headed family as the principle social unit. From Rick Santorum railing against contraception and preaching the nuclear family as the answer to poverty in last year’s GOP presidential primary, to Rafael Cruz Sr. telling an audience that “God commands us men to teach your wife, to teach your children—to be the spiritual leader of your family,” today’s right-wing Republicans are increasingly comfortable with open displays of old-time crackpot patriarchy. This week Sen. Ted Cruz Jr. courts the right-wing preachers of the South Carolina Renewal Project, which is thought to be a key stop on his way to the GOP nomination in that early-primary state.

Let’s face it: The only way charging women more for health insurance and healthcare makes sense is if they have a partner who either shares that burden or shoulders it entirely. As in … a husband. Then it’s clear that the male of the species is doing his part to keep the species healthy and reproducing itself. A woman who doesn’t have a husband to play that role? Well, there shouldn’t be women like that – and certainly if there are, they shouldn’t be having children anyway, or even having sex, so they don’t need maternity care or contraception.

That’s the only way I can explain the GOP’s willingness to openly endorse an enormous transfer of wealth from women back to men by not only advocating the repeal of the ACA but specifically railing against its equal-premium provisions. But don’t worry, gals: You’ll get that wealth back once you get yourself a man!

I got a glimpse of this mind-set from an otherwise open-minded Republican, former RNC chair Michael Steele, last year, when he argued against the ACA’s contraception without a co-pay provision on “Hardball.” As Steele told me:

The problem is that you have effectively absolved the male of any responsibility in the relationship with this woman, whether it’s a sexual nature or beyond that. It’s not just about giving women access to contraception. It’s about the responsible behavior that goes with that access. It’s nice for Barack Obama to tell women, ‘I got your back. Here, have a pill.’ Men have a responsibility here … It’s this other piece that doesn’t get talked about in terms of the responsibility of fathers, or potential fathers, in this relationship.

I tried to reassure Steele that men could continue to be responsible to the women in their lives, even if they got contraception without a co-pay, but he wasn’t having it. I saw the uneasiness with female autonomy that’s at the heart of modern Republicanism, even if Steele himself handles that anxiety better than folks on the far right.

The father of the man who led the crusade to shut down the government over Obamacare, Rafael Cruz Sr., is quite clear about his belief that women must be subservient to men. As David Corn revealed in Mother Jones, Cruz told an Irving, Texas, mega-church last year:

As God commands us men to teach your wife, to teach your children—to be the spiritual leader of your family—you're acting as a priest. Now, unfortunately, unfortunately, in too many Christian homes, the role of the priest is assumed by the wife. Why? Because the man had abdicated his responsibility as priest to his family…So the wife has taken up that banner, but that's not her responsibility. And if I'm stepping on toes, just say, 'Ouch.'

Ouch. I’m waiting for mainstream reporters to ask Cruz whether he shares his father’s beliefs – including his claim that President Obama should “go back to Kenya.” Rafael Cruz is a leading surrogate for his son, and has played a core role in his political rise. I don’t think it’s unfair to ask how much their views overlap, especially as Cruz courts the extremists in the South Carolina Renewal Project.

Right now those extremists matter more to key GOP leaders than ordinary women do. But if Ken Cuccinelli loses the Virginia governor’s race to Democrat Terry McAuliffe, as polls indicate is likely, he’ll do so because of the women’s vote. Republicans can’t win women because they’re still fighting a culture war to restore men to their “rightful” place as the head of the family and society. They’re profoundly uncomfortable with women’s autonomy – and that makes women voters increasingly uncomfortable voting Republican. Making Renee Ellmers the face of the backlash won’t help.

But I don’t expect a Cuccinelli loss to sober up the GOP either. Already right-wingers are telling reporters that McAuliffe is winning because the stridently antiabortion lieutenant governor didn’t campaign hard enough on culture-war issues. Antiabortion activist Marjorie Dannenfelser, who leads the Susan B. Anthony List, told Politico that Cuccinelli bowed to a GOP establishment-mandated “jobs, economy, that’s all that matters script.” Dannenfelser says “that script didn’t work in the presidential with [Mitt] Romney, who is not viewed as conservative as Ken is, and it has been problematic in this gubernatorial race. Sometimes, when it gets to social policy, everyone gets in the fetal position on the Republican side.”

Democrats have to hope the GOP listens to Dannenfelser heading into the 2014 midterms.