Chris Christie’s dream: Why he wants to be the next George W. Bush (seriously)

NJ's governor sees an old path to the White House. But there's a difference: Bush didn't contend with a Tea Party 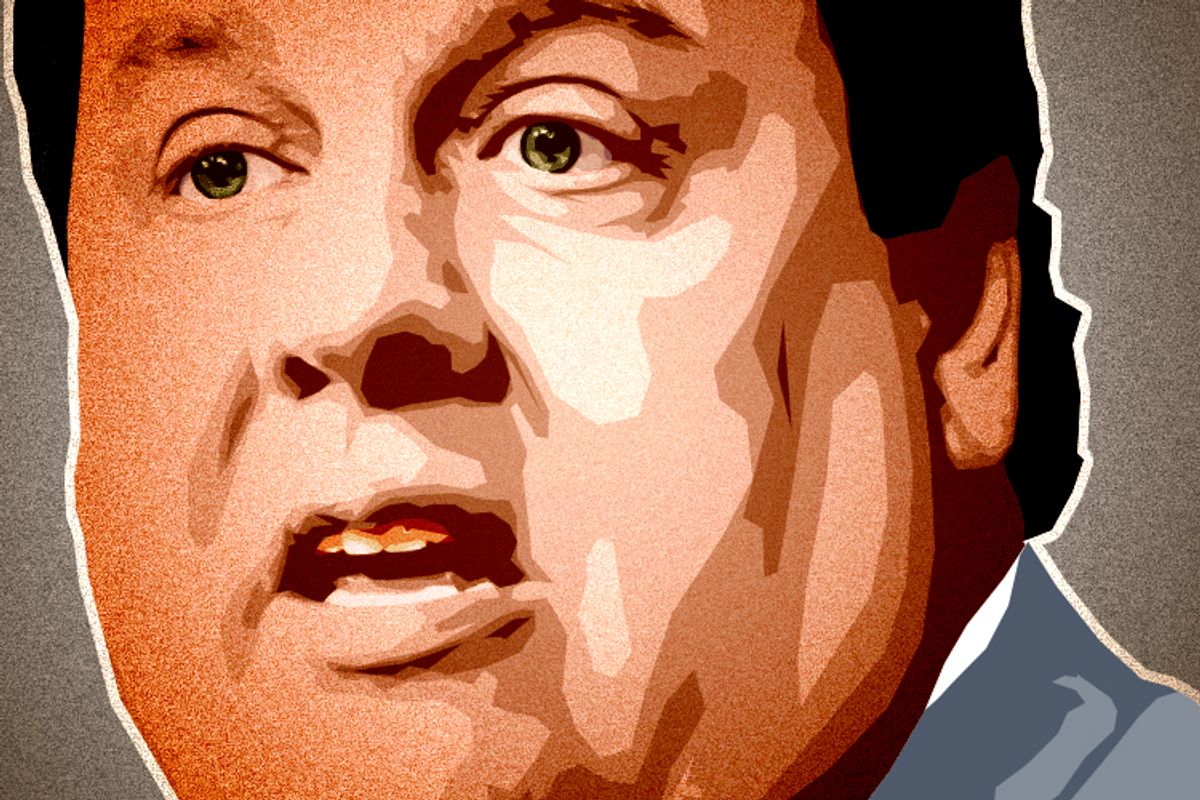 Officially, Chris Christie’s winning reelection campaign was aimed at voters in Democratic-friendly New Jersey, where no Republican candidate for statewide office had cracked 50 percent of the vote in 28 years – until Tuesday night, that is.

But in post-Sandy Jersey, Tuesday’s landslide was an inevitability that the Democratic nominee, state Sen. Barbara Buono, was powerless to avoid. The real audience for Christie’s campaign was the national Republican Party and the national press corps. The message he wanted to convey: I am the exception to the ever self-defeating tendency of today’s GOP.

In that sense, the election couldn’t have been better timed for Christie, coming on the heels of the GOP House’s politically devastating shutdown gambit – and coming on the same night that one of the foundational forces of the Tea Party movement that instigated the shutdown, Ken Cuccinelli, was defeated in the nation’s premier swing state by a profoundly flawed Democratic candidate. The big picture story for the Republican Party in 2013 has been one of the lessons not learned from their own 2012 autopsy, but there in New Jersey was a Republican governor closing his campaign with a rally in a heavily Latino Democratic bastion and assembling a coalition that would cure all of his party’s woes at the national level.

The obvious analog for this Christie triumph is the 1998 Texas reelection victory of George W. Bush. The outcome of that race was never in doubt, but the Karl Rove-led Bush team pushed hard to produce a result that would be interpreted as a national GOP blueprint – something they achieved when Bush crushed Democrat Garry Mauro by 37 points and won 40 percent of the Latino vote and nearly a third of the black vote.

Bush’s victory, like Christie’s, came at an otherwise bleak moment for the Republican Party. After sweeping to power in the Newt Gingrich-led “revolution” of 1994, the GOP had overplayed its hand and watched Bill Clinton easily defeat Bob Dole in 1996. Then, with the public recoiling at an effort to impeach Clinton over the Monica Lewinsky scandal, Republicans lost five House seats in the 1998 midterms – the first time since the James Monroe presidency that the opposition had lost seats in a president’s second midterm and an outcome that precipitated Gingrich’s exit as speaker. Against this backdrop of Republican failure and ineptitude, Bush’s success stood out all the more.

The Republican Party of that era was, more than anything, sick of losing to Clinton and hungry to win again. There was nothing particularly ideological about this desire. So when Bush began talking up his vision of “compassionate conservatism” – of a federal government promoting social welfare in a more active way than traditional conservative dogma prescribed – he found an exceedingly receptive audience among the GOP’s donor class, its elected officials and its opinion-shaping elites. Bush would be their Clinton, they told themselves – the Republican who, unlike Gingrich and Dole and all the others, could actually communicate empathy and caring to everyday Americans the way Clinton did. After all, look what he’d done in Texas!

This is how Bush was able to spend 1999 creating the most formidable presidential primary machine in the history of modern Republican politics. When fundraising figures were reported for the second quarter of the year, his advantage was so staggering and so shocking that it set in motion the demise of not one, not two, not three, not four, not five but six of his intraparty foes before a single primary or caucus ballot was cast.

Bush did end up facing a spirited fight from John McCain, who scored a big win in New Hampshire and a handful of other states, but the outcome was never in much doubt. Because party elites were so overwhelmingly on Bush’s side, he was able to define himself as the candidate of conservative purity and to portray McCain – whose calling card was a campaign finance reform plan loathed by conservative interest groups – as the apostate. This had the effect of ratcheting up McCain’s popularity with Democrats and independents, which only further alienated him from the GOP base and cemented Bush’s hold on the nomination. The race was over by the first week of March 2000. Ten months (and one Supreme Court ruling) later, he was president.

Christie and his team clearly have the Bush model in mind, and there’s plenty to be said for it. The destructive impact of the shutdown and the party’s general reliance on Tea Party rhetoric and tactics has of late awakened a number of Republican donors and opinion-shapers. They are Christie’s natural base, and they will now rally around him aggressively, and tout Tuesday’s result relentlessly.

But the party is also much different now than it was 15 years ago. For many in the Republican universe, purity is now just as important – if not more important – than general election success. This is a consequence of the Bush years, which ended with the rise of Barack Obama and a Democratic Congress and the enactment of an agenda that the right regards as an affront to freedom. To explain how this could happen – how Americans could go to the polls and willfully elect a left-of-center government – the right decided to blame Bush. The basic idea: Bush’s “compassionate conservatism” amounted to reckless Big Government, gave conservatism a bad name and led a confused electorate to turn to Obama. It is out of this conviction that the Tea Party was born – both to fight Obama and to fight the Republicans who enabled Bush (and who might enable a future Bush).

This is what makes Christie’s path from reelection in his home state to the GOP’s presidential nomination far trickier than Bush’s. He must satisfy a critical chunk of the Tea Party right – the Republicans who don’t now consider winning election their highest priority – that he’s one of them, or at least close enough to being one of them that they can go ahead and check his name off.

There’s a school of thought that this is an impossible task. Christie paid tribute to Obama’s leadership and literally embraced the president at the most sensitive moment in last year’s presidential campaign. The charge that he single-handedly extended Obama’s White House tenure by four years could make Christie a nonstarter with too many Tea Partyers. But, like Nate Cohn (who wrote a terrific piece on this subject Tuesday), I tend to take a less fatalistic view. It’s true that Christie now enjoys the reputation of a moderate, but look closer and you’ll see that he’s not a moderate in the way that we once thought of moderate Northeast Republicans. He’s pro-life, staunchly anti-tax, happy to war with public employee unions, veto gun control bills and kill vital public transportation projects.

And there’s his trump card: personality. Many people loathe Christie, but plenty appreciate his swagger, especially in the Republican universe. The risk of Christie as a national candidate is that he’ll lose his temper at the wrong time, in the wrong way – an ugly explosion that becomes his identity and sinks his campaign. The flip side, though, is that he’s good at this game. He’s the rare politician who can talk to a room of people who disagree with them and win them over. They warm up to him, they laugh at his jokes, start to like him – then, without even realizing it, they’re working backward in their minds to tell themselves why, come to think of it, it actually wouldn’t be crazy to support him. I’ve seen him do this in rooms of skeptical Democrats. I’ve seen him do this in rooms of skeptical conservatives. And I can absolutely see him doing it in a room of skeptical Iowa Republicans two years from now.