Trust Me on This: Ground control to Col. Hadfield, amazing lessons from outer space

Trust Me on This: Before astronaut Chris Hadfield played David Bowie in space, he conquered his fears. Here's how

By Col. Chris Hadfield as told to David Daley 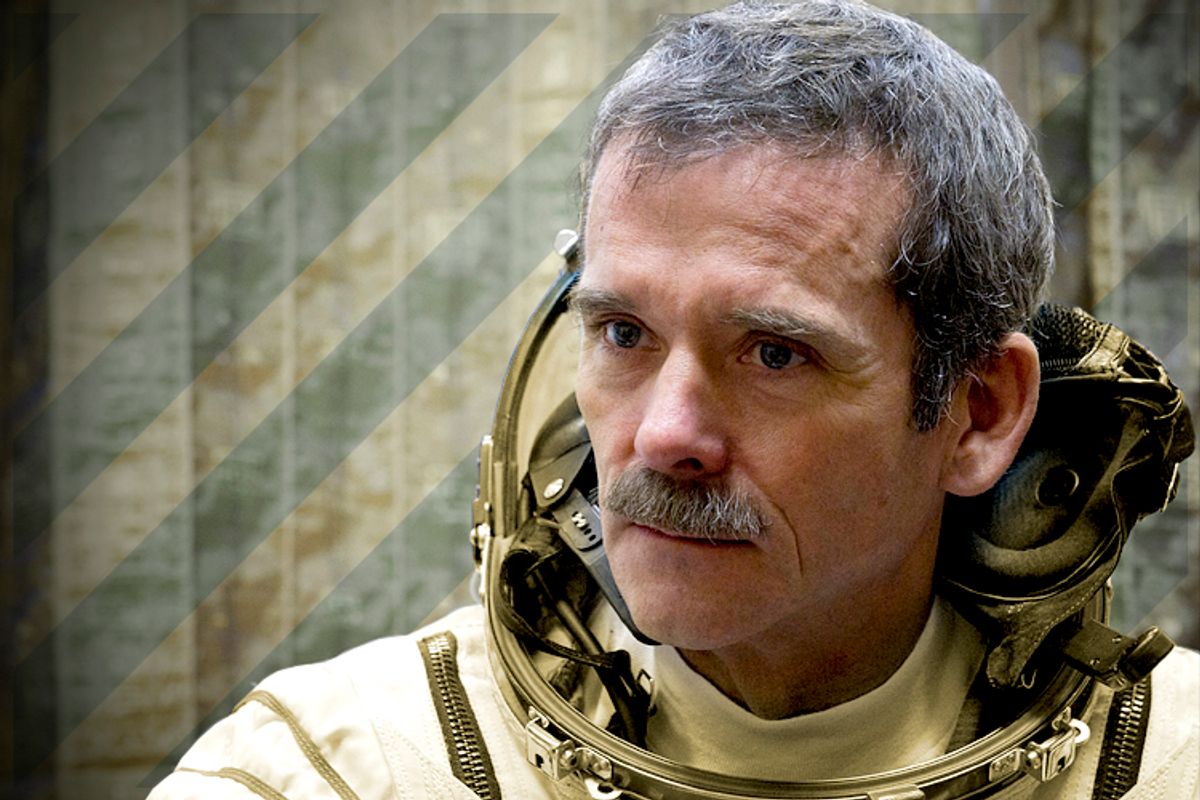 The best advice I've ever received was, “Don’t close the door that’s still in front of you.”  It might sound trite, but it is easy to decide to narrow your life down, or to give up on a dream, without even giving it the effort.

My wife gave me that advice after the Challenger accident. I was a young officer in the Air Force flying F-18s. Our kids were 3, 1 and 0. Everybody is in diapers and there’s not much money. We’d been though the recession in the early '80s, and had to sell our house for a big loss. It was a difficult time for us -- and it was extremely tempting to give up on believing I would ever fly in space.

Then in 1986, an entire crew was killed aboard the space shuttle Challenger. It was an extremely difficult time in the space business. For those of us who were still on the early, hopeful fringes of it, it was almost impossible to bet that we would somehow pick up the pieces, conquer the inertia, and build the bravery and confidence to do it again.

I thought I should try to do something more practical: get a job with an airline. It would be an easier life for us, and seemed more realistic. But my wife said, “Don’t give up. Don’t close a door that’s still in front of us.” She said, “You know, we’re still OK.  Things may still improve and the opportunity may still come along, and you still may get to go to test trials.” I listened to her, and as is evidenced by the 25 years since then, her advice was golden. I’ve kept it in mind ever since.

She knew I didn't want to give up on being an astronaut -- and wouldn't be happy as an airline pilot. That was not an easy time to believe in a dream. When the pause button gets hit on the entire space program, it’s like having an Olympics boycotted -- you lose years, and people who trained for a mission their entire professional lives suddenly lose the one opportunity they might have.

Every astronaut knows that no matter what you might have thought or expected, we are at the mercy of every single launch. Every single launch is a very complex and risk-laden activity. And we internalize it. That’s why we put so much effort in making it as successful and safe as we can. We work hard to make it look effortless and inevitable.

It happened again after Columbia, when we unfortunately lost another vehicle and crew. That is an unfortunate side effect of exploration. After Columbia, we managed to figure out how to safely fly again, and despite tremendous pressures, we safely finished building the space station. We didn’t lose one more crew. Every single shuttle flight after that was an unmitigated success.

My kids are endlessly amused -- and love to tease me -- about my earnestness. But I really believe all of this is true. Having faith in a dream like this -- and in yourself -- really requires a tenacious patience.  You have to constantly remind yourself that this too will pass. Nothing is ever as good or as bad as it first looks. You have to maintain that tenacious patience in pursuit of those things that you know are important to you long-term.

It is really helpful if you have somebody next to you in life that can remind you to try to just keep holding on for a while, whether it’s co-workers, family or a spouse. One reason our marriage has flourished is because my wife enthusiastically endorses going all out in pursuit of a goal. I have offered that encouragement for other people, and definitely other people have done that for me.

If we had given up after the Challenger in 1986, the Hubble Telescope would have never been put in place. We never would have cooperated with the Russians and built the international space station. All of that definitive history – we have had people living in space for the last 13 years – none of that would have unfolded if we had not been tenaciously patient -- and if we had not kept charging toward that open door and a dream, no matter the challenges.

MORE FROM Col. Chris Hadfield as told to David Daley