Did the president say “I’m sorry” for ACA woes well enough to stop the right-wing carping? Of course not 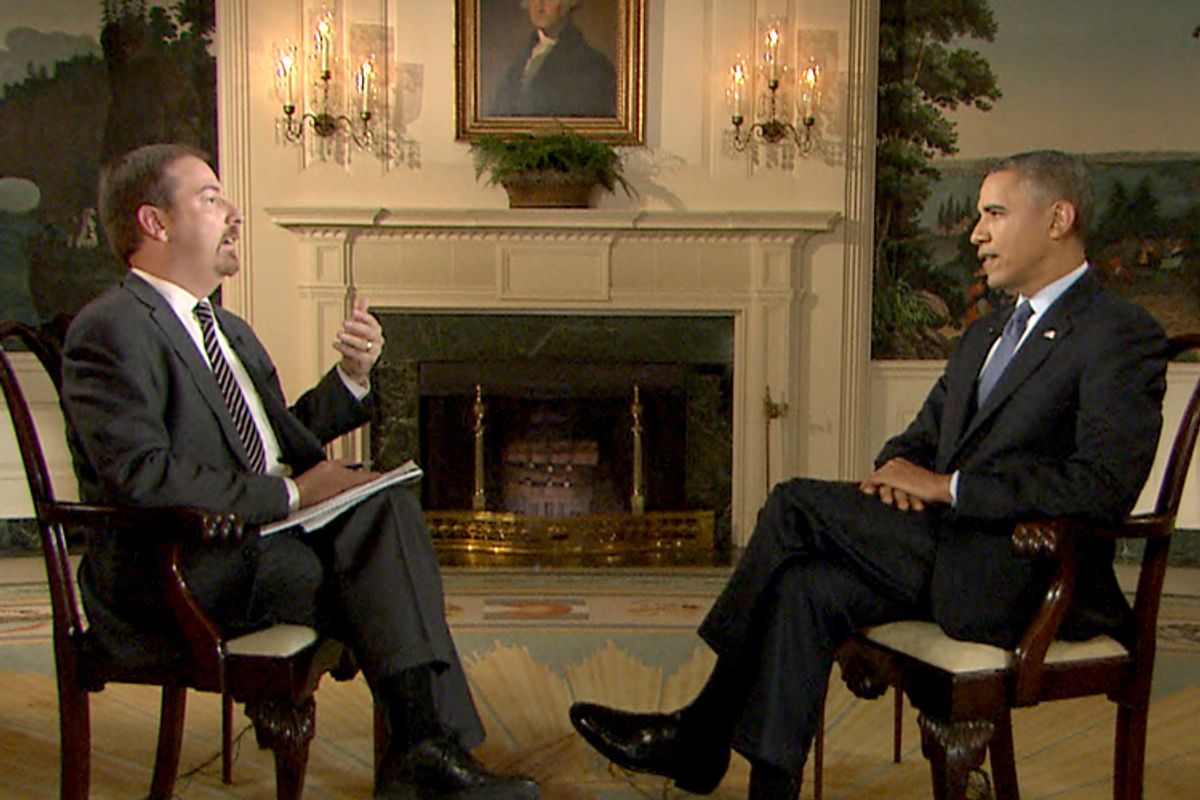 I had the unique experience of watching President Obama’s interview with NBC’s Chuck Todd in real time, as it happened, in order to respond to it on “Hardball” Thursday night, without the benefit of Twitter or other media to help me decide what was important. Personally, I thought the president worked hard, if not always convincingly, to get Americans to take a longer view on the success of the Affordable Care Act. I was struck by his assertion that the ACA tried to be as “undisruptive” to the private market as possible. As someone who wanted at minimum a public option and thought the president compromised too much with the greedy private system, I thought the takeaway from the interview was “no good deed goes unpunished.”

But NBC News, and all of Twitter, trumpeted what turned out to be the newsworthy bite in the interview: Obama’s “apology.” Asked by Todd whether “you feel like you owe these folks an apology for misleading them,” he replied, after a lot of throat-clearing: “I am sorry that they -- you know, are finding themselves in this situation, based on assurances they got from me. We've got to work hard to make sure that -- they know -- we hear 'em and that we're going to do everything we can-- to deal with folks who find themselves -- in a tough position as a consequence of this.”

Now, let’s be honest: That “apology” is right up there with “I’m sorry if anyone was offended by [X thing] I  [said or did].”  If you feel you deserve an apology, you won’t be satisfied by it. Did he “lie” when he said “If you like your health care plan, you can keep your health care plan?” Technically, I suppose he did. Was he told that millions would face insurance policy cancellations, and did he barrel ahead with his blithe slogan nonetheless? Of course not.

The truth is somewhere in the unsatisfying middle. My assumption is that Obama knew (certainly HHS did) that there would be cancellations, but he trusted (wrongly) that private insurance companies would help people transition to similar or better plans seamlessly. They didn't, and the ACA website woes have made the problem worse. But people who are inclined to give the president the benefit of the doubt didn’t need an apology. The people who’ve been calling him a liar, and a Communist, and Hitler, and a Kenyan Muslim imposter, since Day One? No, they won’t be satisfied.

The real audience for Obama’s apology was the media, and judging from Friday’s day-long parsing of the president’s Thursday night words, I’m not sure it’s been accepted. “He’s said he’s sorry; does he need to send flowers?” MSNBC’s Alex Wagner joked Friday afternoon. But it wasn’t entirely funny. Wagner perfectly captured the wounded self-importance of many of our media colleagues.

I don’t get the demands for a personal apology from the president for what is essentially a policy problem. I don’t remember journalists demanding that President Bush “apologize” for parading in front of a “Mission Accomplished” banner after his Iraq "victory" – and before another thousands more Americans died in that useless war. (Let alone demanding an apology for lying us into that war.)

Once again I’m struck by the double standard in the coverage of Obama and his GOP predecessors. I'm also unsettled by the profoundly personal ways in which this president is analyzed and judged. Maybe he bears some blame himself, given that his historic 2008 campaign frankly celebrated the cult of personality that developed around Candidate Obama that year. But the apparently widespread need for the president to don sackcloth and ashes and grovel at the feet of opinion makers is disturbing.

I understand why the right needs to see the president humbled. Journalists, not so much. At root I think it stems from the inability of most mainstream journalists to understand the implacable resistance to this president. So they tell themselves a fairy tale in which, if the president just “does the right thing” and asks forgiveness for his real if comparatively trivial “wrong-doing,” he’ll be forgiven. It’s a ritual they know and understand and have faith in; they can’t let themselves believe it doesn’t work. If it doesn’t work (and it won’t)? Once again, the fault will be Obama’s: he wasn’t contrite enough. It was a phony apology. He needs to grovel more convincingly.

On this one, I’m with Ezra Klein, who wrote Friday morning, “Obama shouldn’t apologize for blowing up the terrible individual market.” As Klein observed:

The president's desire to be as “undisruptive” as possible was understandable, but futile. The individual market needed to be disrupted, and profoundly.

Still, the truth is, there are people who have lost plans they liked and who will pay more for the same coverage. I have friends in that position, so I’m not going to insist they’re a Fox News fiction, even if so many of the stories trumpeted on the right fall apart once a sober-minded journalist asks the right questions. In hindsight, the president shouldn’t have simplified his enormously complex Affordable Care Act, and he shouldn’t have sugar-coated the way its reliance on private insurance would leave many Americans still subject to its whims. But all the apologies in the world won’t make a difference to the people who are determined to see the ACA, and the president, fail.