On their planet, it's not racist to compare the national debt to slavery, or "gag" at seeing an interracial couple 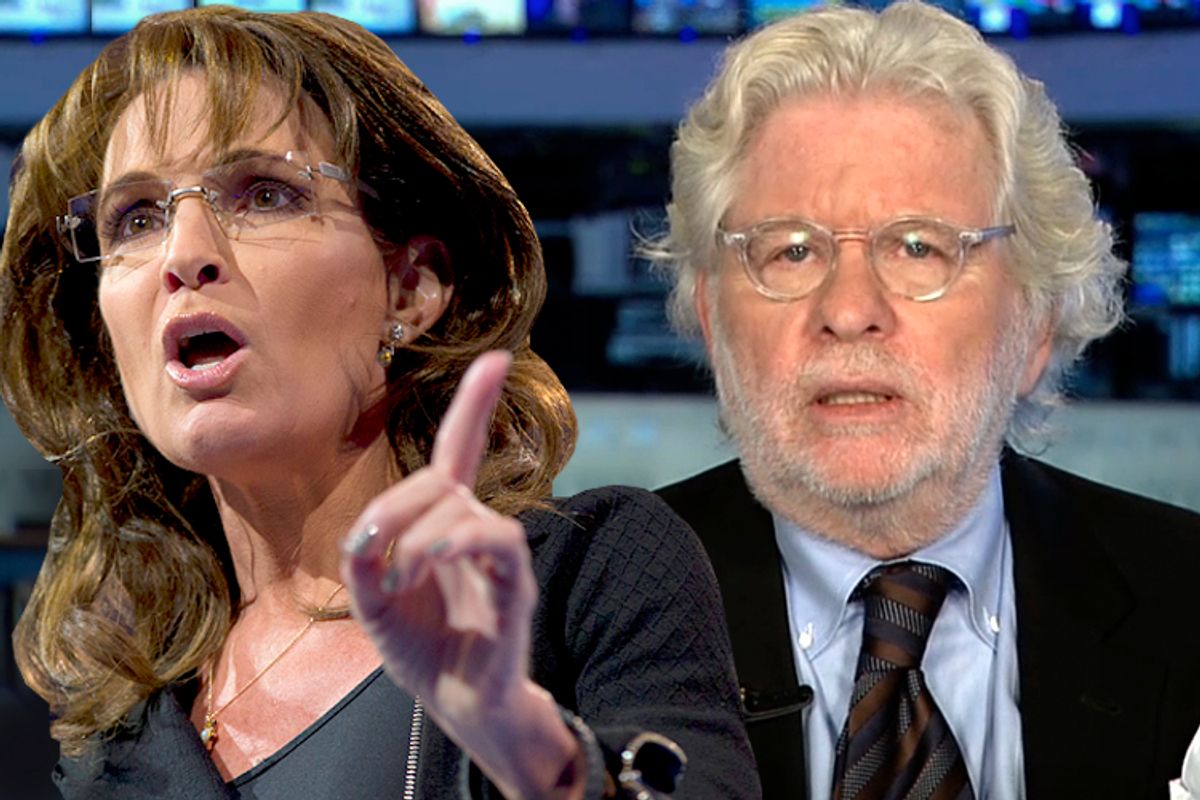 I’m getting a lot of attention, even outside the wingnut blogosphere, for explaining on MSNBC that Sarah Palin’s equating the national debt with slavery is another example of “the white grievance industry” manufacturing and peddling new widgets of rage to the GOP base. I’m not sure what’s noteworthy there. Palin is indeed part of a vast white right-wing anger machine mostly run out of Fox News, though its unrivaled leader is Rush Limbaugh. It’s powered by the paranoia among too many Republicans that white people are somehow oppressed by our first black president.

You’re forgiven if Palin is on your ignore list. In case you missed it, the half-term former Alaska governor riled up an Iowa crowd this weekend by declaring what she was about to say “isn’t racist,” then immediately complaining that liberals (presumably) would “try anyway” to make it seem racist, and then making her ignorant comparison between the national debt and chattel slavery, which is at best deeply dismissive of slavery’s cruel and persistent legacy in American society, if not actually racist.

Railing against Democrats' luring voters with offers of “free stuff” (like healthcare), Palin went on:

Palin is ignorant, but she’s not entirely stupid. She wrapped a lot of demagoguery in a very few sentences. Not only does she minimize the horror of slavery, she gets to play victim while doing it. How dare those liberal racists call us racist for equating things government does that we don’t like with having absolutely no rights, and being owned and worked by someone else, who has the power to beat you and rape you and/or rip your children from your arms and sell them to someone else (and/or rape them too, because why not)?

As I said on MSNBC’s "Politics Nation," “white privilege” can be a tough term to define precisely, but I’d say Palin ran a clinic on it in Iowa. White privilege consists of either being so ignorant about slavery that you can compare it to the national debt, or so entitled that you know it’s an absolutely bogus and invidious comparison but you go ahead and make it anyway because … free speech! Or something.

But this is the main political capital that the Republican Party seems to have today: the anger and grievance of older white voters, most of them male, at the multiracial country that’s emerging in their lifetimes, as personified by President Obama. The mainstream media, though, is having a very hard time deciding how big a deal that is, and so they highlight someone – in this case, me – calling it a big deal, in order to suggest, well, liberals are going a little too far on this race stuff, too. Aren’t they? No, we’re not.

The Washington Post’s self-destructive columnist Richard Cohen showed the trouble many pundits are having reckoning with this new world, in a column about why New Jersey Gov. Chris Christie will have a hard time with the very Iowa voters Palin pandered to last weekend. The problem is that in describing the attitudes of those voters, Cohen, sadly, seemed to share them. He’s mainly in trouble for this paragraph (also, to be fair, for a lot of his past creepy writing about race):

The problem with what Cohen wrote is that he seems to share the “gag reflex” of those “conventional” voters. (And is “conventional” really a synonym for “backward” and “racist” at the Washington Post? Is that in the stylebook?) Cohen also manages to compare these Tea Party devotees to the Dixiecrats who bolted the Democratic Party over civil rights legislation – but then he says Harry Belafonte was wrong to call them “racist.” OK.

Richard Cohen is an absolutely terrible columnist, but his Op-Ed today, along with the Mediaite and Real Clear Politics posts about my Palin remarks, shows the trouble journalists are having reckoning with the racism of many (not all) Tea Party voters and their leaders like Palin. Clearly, anyone who demands the right to use the word “slavery” to describe the national debt is verbally challenged and/or probably racist, given this nation’s awful history. It shouldn’t be controversial to describe the sense of white grievance animating today’s GOP, but apparently it is.