The United Methodist Church has convicted the Rev. Frank Schaefer of violating its law 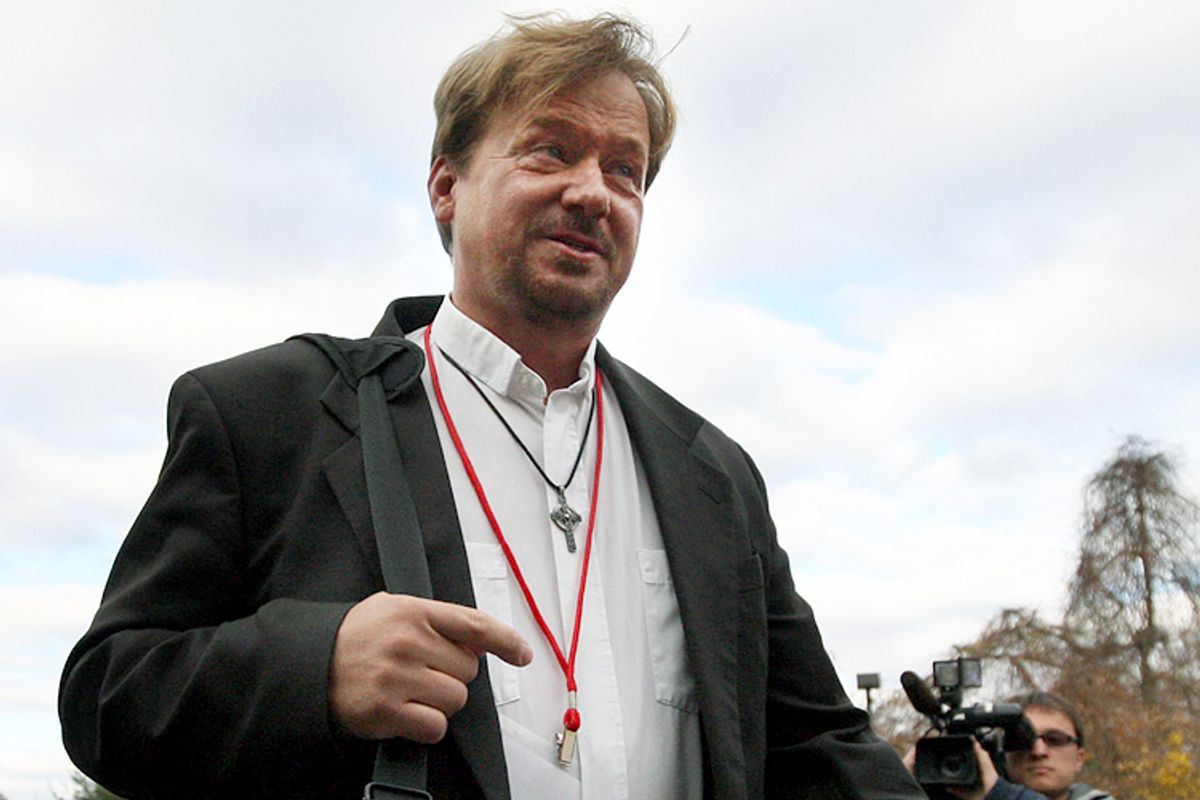 The Rev. Frank Schaefer, right, of Lebanon Pa., walks to the gymnasium with an unidentified woman, before facing his sentencing at Camp Innabah, a United Methodist retreat, in Spring City Pa. Tuesday, Nov. 19, 2013. A jury of his pastoral peers convicted Schaefer on Monday of breaking his vows by officiating his gay sons' Massachusetts wedding in 2007. Schaefer could face punishment ranging from a reprimand to a suspension to losing his minister's credentials. (AP Photo/Chris Knight) (Chris Knight)
--

Like many ministers, the Rev. Frank Schaefer just wanted to perform his child's wedding. And that's what he did. In a 2007 ceremony in Massachusetts, he officiated as his son said his vows. Now, Schaefer has been convicted by the United Methodist Church of violating its law, and stands in danger of being officially defrocked. All because Schaefer's son is gay. And in a truly vindictive twist, the charges against Schaefer arrived just one month shy of the church's statute of limitations. They were brought because a member of his own church "was dismayed and shocked" when he learned about the wedding.

The United Methodist church says it accepts gay and lesbian members, but that homosexuality is "incompatible with Christian teaching." And though he could have avoided going to trial if he promised never to officiate at another same-sex union, Schaefer, who pleaded not guilty, refused to do so. As the minister explained, three of his four children are gay. On Monday, Schaefer acknowledged he knew he was going against the "ritual purity" of the Methodist Book of Discipline and admitted that keeping the wedding secret from his congregation had been "a lie and a broken covenant." But, he said, he had told his superiors about the wedding, and that he believed he was following his faith's command to minister to all.

Jon Boger, the church member who submitted the original complaint, meanwhile said at the trial that he felt "betrayed" by Schaefer's act, adding, "It's his son. He loves his son. In a way I felt bad for him. But he's also shown no remorse or repentance, nor has he apologized to anyone."

Maybe he doesn't feel the need to apologize for being loving and supportive to his kid. In a conversation with the AP earlier this week, Schaefer's 29-year-old son, Tim, said that as a teenager, he considered suicide and prayed that "God would make me normal, take this away from me." But when he finally told his parents he was gay when he was 17, he says they accepted him "completely." That's why he wanted his dad to do his wedding. "I remember thinking I have two choices," he says. "I can ask my dad and know I am putting him in a position ... where he would risk his career, or I could not ask my dad and really risk hurting his feelings. I think he would have been devastated if I hadn't asked him," he said.

It's a thorny issue when a church's rules are not yet up to speed with either the laws of a particular state or the basic enlightenment of its time. The United Methodist Church likely didn't want to find itself in the throes of a potentially precedent-setting challenge, but here it now is. A church spokeswoman told Schaeffer's Pennsylvania news affiliate, "It's been an ongoing concern and a matter for prayer and we keep on discussing."

Schaeffer said on Monday that "I did not want to make this a protest about the doctrine of the church. I wasn't trying to be an advocate. I just wanted this to be a beautiful family affair, and it was that." Yet all the dogma in the world is meaningless in the face of our actions. It's by the things we do, not the beliefs we profess, that we express who we truly are. And when he officiated at his son's marriage, Schaeffer was being an advocate – an advocate for love and acceptance and blessed, blessed change. It may cost him his church. But it was true to his soul.