From "Royals" to "Thrift Shop," many of the year's pop hits have been built on tone-deaf critiques of rap 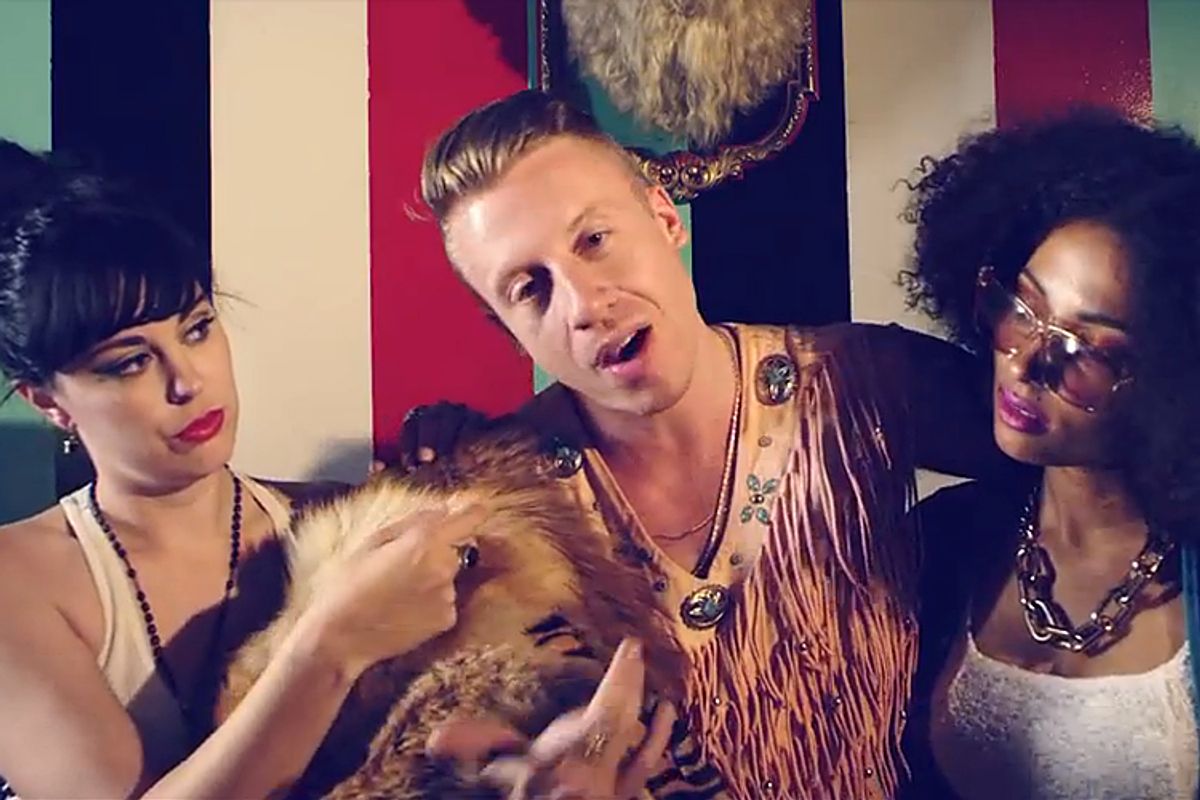 Lorde's single "Royals" has been at No. 1 on the Billboard Hot 100 for seven weeks -- enough time for pop listeners to begin expressing their discontent at the perceived politics of the song. A common critique has been that the young New Zealand native is specifically mocking the tropes of hip-hop when she sings about rejecting "Cristal, Maybach, diamonds on your timepiece / Jet planes, islands, tigers on a gold leash."

As Verónica Bayetti Flores wrote on Feministing: "What I do find problematic [...] is to focus a critique of excessive consumption to a genre both created and currently dominated by black Americans, particularly when the vast majority of excess consumption is done by white people."

"Royals" arguably critiques popular music across genres. But its mockery of hip-hop may stand out in part because that mockery places it squarely in the middle of American pop music right now. As rock critic Chris Weingarten pointed out on Twitter, two of this year's other long-running No. 1 hits are racially problematic in the extreme.

"Thrift Shop," the Macklemore and Ryan Lewis song, treats shopping for used clothes as a fun treat for white people to enjoy; Macklemore raps that people who see him in his new duds call him a "cold-ass honky." The song's racial issues are closely conflated with class -- thrift shopping is treated as an amusing hobby, and not as an economic necessity. But starting with the fact that Macklemore is a white man attempting a hip-hop career, there's a certain element of race mockery at work here, not least because the song, as the New York Times' Jon Caramanica wrote, aspires to be a "robust sendup of hip-hop-extravagance clichés" -- a status the song itself doesn't earn strictly on qualitative grounds (pitched at a broad audience, it's not particularly witty).

Macklemore seems to be rebuking the almost entirely black hip-hop world for its concern with wealth, preaching to a perceived hypermaterialist group of artists that true satisfaction can be found by rejecting pricey duds. Jay-Z and Kanye West, whose "Watch the Throne" album dealt at length with what it means to be among the wealthy in an inherently racist nation, are only two of the artists whose message is being distorted and flattened out by a mass audience laughing at how silly it is that rappers can afford and choose to buy luxury goods. Macklemore has acknowledged that he would not be nearly as successful were he a black artist -- but the reason for that isn't merely that, as he's said, he's "safe." It's because mocking black artists and their music is a practice that apparently never goes out of style. He may be "the first contextually post-black pop-star rapper," but his first successful single is built not merely on a genre associated with black artists but on tearing down the myths he seems to be playing into.

"Harlem Shake" is an entirely different matter; the white DJ Baauer's sampling of a 2001 rap song by Plastic Little and a 2006 reggaton song by Héctor Delgado has little to say about the contemporary scene. It hit No. 1 on the charts thanks to endless videos made by people enthusiastically dancing to music sampled from minority artists without their permission. How weird hip-hop music is! How strange and funny to dance to!

Lorde's song reads to some as a nuanced critique because the rest of what's out there is so excessive. Perhaps we're in a high-decadent period for grotesqueries of white people laughing at black culture, from Lily Allen's "Hard Out Here" video that parodies a flesh- and Champagne-obsessed rap world that doesn't exist in the way Allen seems to think it does (see Feminista Jones' recent analysis for a more in-depth take on this video) to Miley Cyrus' exploitation of black female sexuality. Lady Gaga shoehorns three rappers into a song about "jewels and drugs" on her new album "ARTPOP" -- a self-styled examination of popular music that uses hip-hop to get at, once again, materialism and altered states. Taylor Swift recently used an interview with New York magazine to get in a dig at artists who insert rap into their songs in order to inorganically grow their audience, and she's right -- but it's not black listeners Lady Gaga hopes to reach. It's white listeners who think "jewels and drugs" are the beginning and ending of hip-hop, all it has to offer.

Anyone who thinks it would be easy for a black artist to cut through all the noise and express himself or herself should look to the case of Kanye West. His most recent album "Yeezus" is many things, but it's definitely not solely focused on materialistic tropes to the exclusion of serious thought. After his lynching-themed "Blood on the Leaves" performance at the VMAs was entirely overshadowed in the press by Miley Cyrus (with whom West has reportedly collaborated), West gave an interview in which he described his influence in the music and fashion industries. West was lampooned as an egomaniac on Jimmy Kimmel's talk show, then when he defended himself as a legitimately influential artist in a Kimmel appearance, his quotes were framed as "ridiculous" or crazy. It's much easier to frame people as mindlessly materialistic if they don't talk back -- or if you don't let them.