Will George Zimmerman kill again?: His history and the law pose serious risks

Between George Zimmerman's history of conduct, his state of mind and our judicial system, it's a very real question 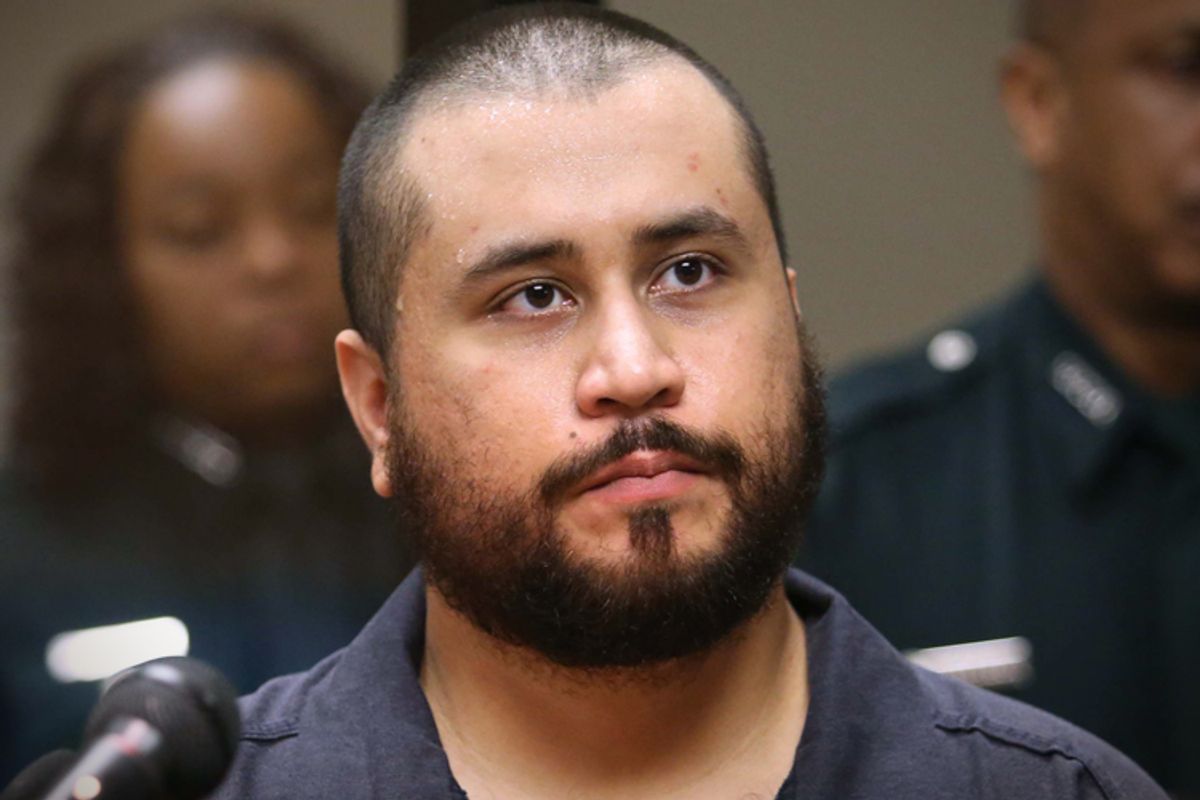 George Zimmerman appears to be a man unhinged. As has been well chronicled, the 30-year-old former neighborhood watch captain – who in July was acquitted for the murder of 17-year-old Trayvon Martin — found himself back in police custody this week. This time he is accused of aggravated assault with a deadly weapon and domestic battery against his 27-year-old girlfriend Samantha Scheibe, who he told authorities is pregnant with his child.

Scheibe told a police dispatcher that Zimmerman was in the house with four weapons – including a shotgun, an AR-15-style assault rifle and two handguns.

But perhaps this was to be expected. Zimmerman’s history of violent behavior existed well before his now infamous murder of an unarmed African-American child.

Now the scary but inevitable question is: Will he kill again?

Consider his history. In July 2005, Zimmerman was arrested for “resisting an officer with violence” after he intervened in a confrontation between a friend and a police officer. Zimmerman, who was under the influence of alcohol at the time, reportedly became profane and attacked the officer. Eventually charges were reduced — and subsequently waived — after Zimmerman agreed to enter an alcohol education program. But by August of the same year, his former fiancée sought a restraining order against him on charges of domestic violence. The Orlando Sentinel reported he came to her house and became violent when she told him to leave. Zimmerman skillfully counterfiled, and both parties were granted restraining orders against the other.

Zimmerman’s wife, Shellie, who stood by him during the Martin murder trial, separated from her husband in August 2013, just one month after his acquittal. In September police were called to her house following a domestic dispute. "I don't know what he's capable of,” she said in the 911 call. “I’m really, really scared."

Shellie told authorities that Zimmerman had punched her father in the nose, broken her iPad, and that he had his hand on his gun. Though no charges were filed, Shellie admitted to NBC's "Today" that she doubts her husband's innocence in the Trayvon Martin killing case. “I think anyone would doubt [his] innocence,” she said and added that recent ”revelations helped take the blinders off” — and that she no longer knows who George really is.

Then in late October, she claimed her estranged husband nailed a marksman target with “17 bullet holes” to a wall in her parents' home. Ostensibly he did so as a threat of what he is capable of doing – and an eerie reminder of the 17-year-old boy he killed.

And since his acquittal Zimmerman has been cited three times by police in driving infractions — twice for speeding — and in all cases he was in possession of a firearm.

Supporters of the Martin family will likely not be surprised by the newest charges against Zimmerman, nor should anyone, given this track record. Millions of us already believed him to have stalked and murdered the young Trayvon with deliberate and malicious intent. But as Zimmerman stood in arraignment this week, something became abundantly clear: Our judicial system all too easily allows men like Zimmerman back on the streets — to offend again.

Zimmerman was given a relatively low bond, and the judge willfully ignored Zimmerman’s past charges. Seminole County Judge Fred Schott told Zimmerman that he would not set bond based on prior court cases. "As far as I'm concerned, this is a brand-new case," Schott added.

How can this be? And can one imagine such leniency being given if Zimmerman were black?

During his initial murder trial, evidence of Zimmerman’s past and mental health was largely ignored or sidelined by a near-obsessive focus on the behavior and dalliances of teenage Trayvon. One of the crucial factors in the pool of evidence was the fact that Zimmerman was prescribed the use of Adderall and Temazepam — drugs that have side effects that include hallucinations, anxiety, insomnia and aggressiveness.

This week prosecutors alleged that Zimmerman choked Schiebe a few weeks ago during a separate argument. (Though Scheibe had not reported those allegations to police until after the arrest.) Prosecutors also disclosed that Scheibe said Zimmerman had recently talked about suicide. Yet despite this pattern being typical for most domestic violence abusers — and a near certain indication that Zimmerman will continue to commit violent acts — he is back on the streets after as little as a $900 was paid to the county court.

This reflects a hardly discussed reality in our criminal justice system: This nation jails nonviolent offenders and subjects people with marijuana convictions to three strikes rules; but men who commit apparent murder and violent acts of domestic abuse could be released after 24 hours.

A national study in 2000 by professor Edward Gondolf at Indiana University of Pennsylvania interviewed the former and current partners of male battery offenders and found 41 percent of victims reported that the men committed a re-assault during the next 30-month period. Nearly two-thirds of the first time re-assaults occurred in the first six months and about 20 percent of those men repeatedly re-assaulted. A 2004 study conducted in New York found that 62 percent of all domestic violence defendants were re-arrested in the first two years after arrest.

And according to research compiled by the Bureau of Justice Statistics, out of 300,000 prisoners released in 15 states, 67.5 percent were re-arrested within three years.

In Florida, in particular, recidivism rates for violent crimes are among the highest in the nation; and despite increased investments in parole programs, recidivism has remained consistently high. Indeed, according to a 2009 report by the Florida Department of Corrections: “Each year the rate at which ex-offenders recommit crimes in Florida after leaving the custody and supervision of the Florida Department of Corrections continues virtually unchanged. The number of inmates in our prisons rose 19.8 percent over the last 5 years … without working to resolve the steady rate of offender recidivism.” And approximately 32.8 percent of Florida inmates are projected to return to prison within three years.

In the curious case of George Zimmerman the judge’s willful amnesia of his past is an indication on how this continues to happen. Not to mention what occurred in the first few hours after Zimmerman was questioned in the shooting death of Trayvon Martin – when he was let go and never charged with a crime.

Jonathan Capehart, writing for the Washington Post earlier this year, opined, “Just what in Zimmerman’s past might have led him to … kill an unarmed teenager with a gunshot to the chest is relevant in this case.”

I would add that in this latest case of domestic violence, his killing of an unarmed child should also be taken into account.

According to a 2003 recidivism research report by the state of Florida, Zimmerman’s behavior reflects a “profile” of repeat offenders who are all but certain to recommit. That study found that among the most acute factors that raise both reoffense and recidivism for offenders were prior recidivism and more disciplinary reports. For males in particular the study concluded that prior recidivism, disciplinary reports and a prior case of homicide or other violent crime increased reoffense rates exponentially.

In what world can a man accused of domestic abuse by several women, an attack on a police officer and the murder of an unarmed child not be identified as a threat to society – in need of increased scrutiny?

In academic and scientific circles a sociopath (and/or psychopath) is defined, in part, as one with an uninhibited gratification for criminal or aggressive impulses, the inability to learn from past mistakes, and lack of remorse for their actions. Though it may be a stretch to suggest Zimmerman is either, there is certainly no doubt that he displays seemingly pathological, reckless violent behavior.

He most notably lacked remorse for his actions when he told Fox News that it was “God’s plan” for him to kill Trayvon Martin; and following yet another domestic violence allegation the only thing Zimmerman appears to have learned is how to effectively play the court system in his favor. As Zimmerman’s girlfriend exclaimed during her 911 call, “He knows how to do this. He knows how to play this game.”

British researchers have found that in offenders displaying these kinds of psychosis the probability of reoffending increased. This was particularly true when substance misuse increased the risk. (Read: Adderall and Temazepam).

Furthermore, in a Canadian study, prisoners displaying psychosis had a 2.5 times higher probability of being released from jail, even though they were more likely to recidivate. That point would undoubtedly baffle the average American, but the same occurs here right before our eyes.

It may be a natural instinct for observers to compare Zimmerman's latest bouts with those of O.J. Simpson. His slow decline back into the arms of the law may well end in his receiving overdue justice for a crime millions are convinced he committed in cold blood.

But what is most disturbing here, is how easily and silently the American judicial system aids and abets the sociopathic (and I dare say possibly psychopathic) behavior of men with guns — who threaten women and kill children with impunity.