"Getting On": A story of American healthcare, told through poop jokes

"Getting On" hasn't quite found its tone, but strong performances hint at a future beyond toilet humor 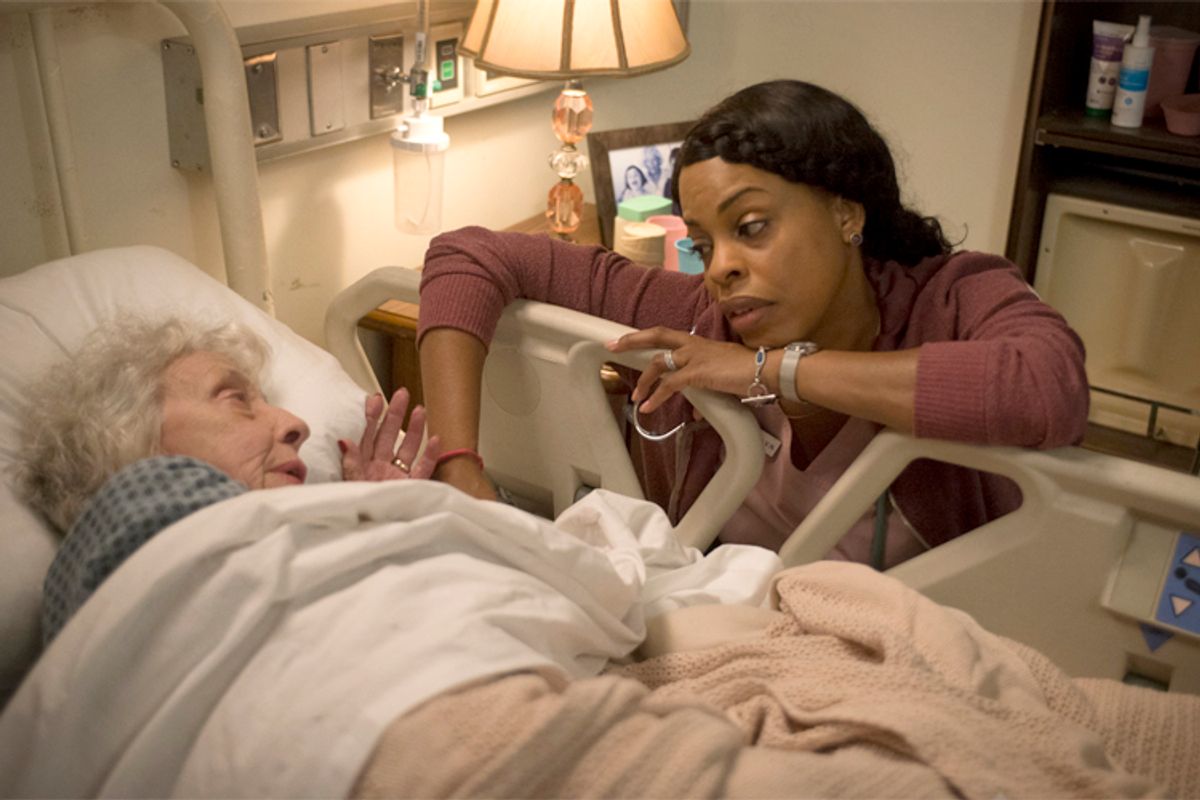 A peek behind the hospital curtain: As a critic, I received five out of six episodes of HBO's new medical sitcom "Getting On" prior to its premiere this Sunday. The last time I received such an expansive gift from the cable heavyweight was way back before the fourth -- and arguably best -- season of "The Wire" aired, and I was mailed that entire, riveting season on watermarked, personalized DVD. At that time, "The Wire" had not yet become the critical darling it is today. I believe HBO wanted to give writers a chance to absorb the full impact of a program that was marked by its subtlety and moderate pacing. "Getting On" certainly isn't the miracle of modern television that "The Wire" is, but it does get off to a similarly slow start. The question is whether it's going anywhere.

"Getting On" is set in the extended care facility of a California hospital and revolves around a handful of medical professionals and their patients, all of whom are suffering from the advanced stages of ... well, life. The first episode opens with a nearly immediate death, setting a grim tone and demonstrating that, in this sterile, coldly photographed environment, existence is fleeting. Tone, as it turns out, is also fleeting. From death, the focus quickly shifts to the scatological with an ongoing gag/plotline about an unclaimed bowel movement and the correct singular form of the word "feces."

As the show has been adapted from a British comedy of the same name, expect a reasonable amount of cringe humor in the vein of "The Office," "Extras" and, most recently, HBO's disappointingly insubstantial "Hello Ladies." Here, inside the Extended Care Unit of Mt. Palms Hospital in Long Beach, the camera is particularly fond of cutting to bewildered stares and blank nonreactions from nameless, lineless elderly extras scattered around the hospital ward. "Getting On" is blandly lit and undersaturated, but thankfully is not shot in the woefully overused faux-documentary style of so many other sitcoms these days.

If there is a David Brent or Michael Scott, it would be Laurie Metcalf as insensitive, overbearing doctor Jenna James, who has begrudgingly accepted the task of overseeing the old folks ward on a temporary basis. James, who prioritizes her fecal research over patient care, experiences a meltdown -- more like a hissy fit -- that turns her temporary exile permanent. As of yet, there is no Jim & Pam. All romantic hopes on the floor seem pinned to Antoine, a handsome, young, male nurse who mostly flirts harmlessly and pushes the gurney when patients relocate, or die, or both. "MadTV's" Alex Borstein and Niecy Nash, as Dawn Forchette and Denise "DiDi" Ortley, are most often paired as the nurses charged with the day-to-day chores of making several older women comfortable in their last days. (The following episode sees the addition of a persnickety gay head nurse who adds another frustrating level of hierarchy above Dawn and Didi's heads.)

Character development is slow in the first episode, but Dawn's easily flustered, eager-to-please demeanor hints at serious personal dissatisfaction and possible neurosis. Look for many a mini-meltdown from her in episodes to come. As Variety acknowledged, Metcalf's character is sadly one-dimensional. Dr. James' fidgety iciness, while funny in spurts, rapidly wears thin -- as these bad boss characters often do. From the first few moments, it seems that Niecy Nash is the one to watch. Her homespun plain-speak, while bordering on the stereotypical, makes for the best punch lines to Borstein's manic setups. Not to spoil anything, but Didi's affable, easygoing nature inadvertently gets her into trouble with another employee in a twist that promises to be quite fruitful down the line.

Other than the somewhat vague implication that the elderly catch a raw deal in their twilight years, "Getting On," as yet, seems to have very little to say about the state of American healthcare these days. It also has little so far to say about Didi's marriage, Dawn's divorce or why Dr. James is so hellbent on advancing her career. "The Wire" started out seeming like a relatively quiet, intricate drama about cops versus drug dealers. Only after the second or third season did it become apparent to anyone but its creators that it was a show about the decline of American cities and institutions. I've only watched two and a half episodes of "Getting On" thus far, but I'm hoping it becomes a show about more than three hospital workers arguing over how to dispose of a turd.

Getting On Hbo Healthcare Medical Shows The Office The Wire Tv