Abe Lincoln, cross-dressing and the American way: The real history of Thanksgiving

What we think of as Thanskgiving really started in the 19th century, with some rituals that might surprise you 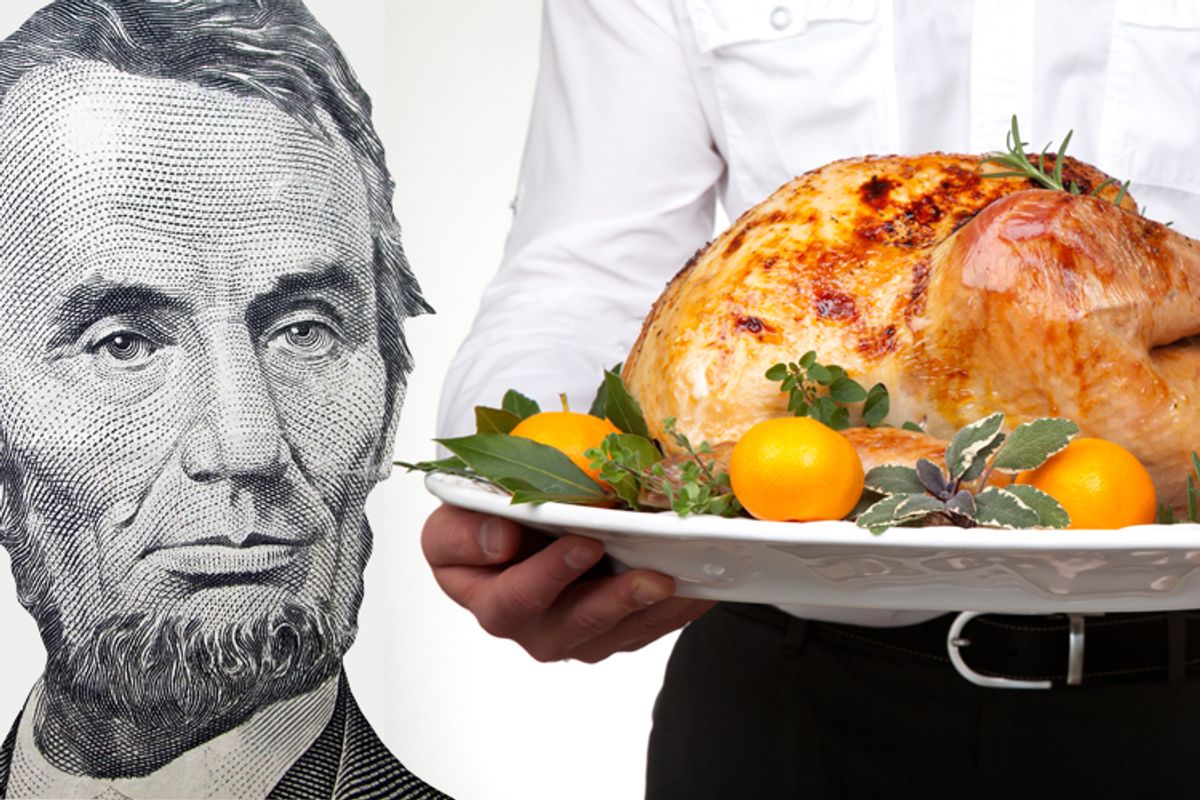 Americans really love Thanksgiving. While Christmas is the undisputed king of American holidays, with its irony-proof annual ritual of greed, envy and lust-driven consumerism in celebration of the birth of a humble, first-century Nazarene Jew who told his followers to sell all of their possessions to the poor, Thanksgiving has nonetheless risen to a prestigious position in the ranks of cherished American holidays. Heck, in 2011, Americans doled out over 15 billion Thanksgiving dollars to the turkey farming industry alone.

It's easy to see why Thanksgiving is so popular: What screams "America!'" more than a holiday where you have the free rein to engorge yourself into a state of a postprandial somnolence while becoming fused to the sofa in front of a 400-inch plasma screen displaying the exploits of herculean men who traverse a large field while bashing their helmeted heads together in simulated combat? Excessive gluttony and mock gladiatorial violence! Now that is what American freedom is all about.

But how did Thanksgiving get so darn popular? Well, Thanksgiving's popularity as an American national holiday has deep roots in the 19th century and the tradition of the "domestic occasion" that became a fixture in American middle-class culture during that period. In her fantastic article "The Making of the Domestic Occasion: The History of Thanksgiving in the United States," historian Elizabeth Pleck defines the "domestic occasion" as "a family gathering held in the home which paid homage to the ideal of the 'affectionate family.'" Usually, the ideal "affectionate family" was a nuclear one, but domestic occasions could also be a "gathering of extended kin" that included neighbors and even strangers. Pleck calls the domestic occasion a "culturally dominant form," which is academic speak for a tradition that began with the middle class but became widespread throughout society by the 20th century.

Many are familiar with the historical first Thanksgiving, held in 1621 by the New England Pilgrims and their Wampanoag Indian neighbors. That story, for better or worse, is a part of American history that has been mythologized and embellished over the centuries. But it's the rise of the domestic occasion in the 19th century, rather than the so-called First Thanksgiving, that best explains the holiday's continued reverence in American life. While Thanksgiving had long been a regional tradition in New England, the earliest attempts to make it a national holiday stemmed from the Civil War era. Around 1846, Sarah Josepha Hale, editor of Godey's magazine, began sending out mass letters to government officials that encouraged a "Great American Festival" of Thanksgiving. Hale hoped that such a unifying holiday would help avert the Civil War. She was disappointed in that respect, but when the war came, Hale's lobbying for the holiday helped convince President Abraham Lincoln to declare a national day of Thanksgiving in November of 1863.

Thanksgiving helped ease the types of social and economic dislocations that defined American society in the mid-19th century by establishing an occasion for formal "family homecoming." The domestic occasion of Thanksgiving helped create, however fleetingly, a nostalgic re-creation of a supposedly simpler past rooted in the countryside and the warmth of kith and kin. This ritual proved especially attractive to Americans living in an era when, as Pleck notes, "the growth of commerce, industry, and urban life created a radical break between past and present, a gap that could be bridged by threshold reunions at the family manse." Thanksgiving provided a day of refuge for Americans caught up in the chaos of the dynamic, urbanizing, mid-19th century market economy and the bloodshed of the Civil War.

By celebrating Thanksgiving via the simple display of old-time domestic ideals like cooking and family togetherness, Americans also celebrated the "blessings of American nationhood." Abraham Lincoln, in this respect, was the patron saint of Thanksgiving. Pleck writes that Lincoln viewed Thanksgiving as "the time for a grateful nation to praise God for blessings bestowed, for the many years of 'peace and prosperity,' for the growth in national wealth, power, and population, 'as no other nation has ever grown.'" Americans adopted Lincoln's view, turning Thanksgiving into a general celebration of national prosperity. This aspect of the holiday only grew in importance and continues into the 21st century, when ever more elaborately larded family dinner tables serve as gluttony-inviting altars to America's national prosperity and abundance. Indeed, modern Americans, like true world conquerors, celebrate their abundance by eating in abundance.

The poorer classes, who lacked the upper middle class’s access to abundant domestic gaiety, had their own decidedly rowdy Thanksgiving traditions that dated back to the 18th century. As Pleck describes, in the 1780s, groups of lower-class, cross-dressing men known as the Fantastics began masquerading in the streets of New York and Pennsylvania and roaming from door to door insulting, threatening and demanding treats from their more well-off neighbors. More annoying than dangerous, the Fantastics' shenanigans eventually inspired the middle classes to create their own version of more-contained Thanksgiving Day rowdiness: the football game. In 1876, the student-run Intercollegiate Football Association held its first championship game on Thanksgiving Day, beginning a tradition of football on the holiday that rapidly spread to high schools, college campuses and, eventually, to pro football leagues. Middle-class Americans made the Fantastics' Thanksgiving traditions of rowdiness and misrule safe for domestic, bourgeois consumption by containing it within the confines of pigskin competition.

By the mid-20th century, mass food production combined with the proliferation of Thanksgiving decorative symbols (Pilgrims, turkeys, etc.), and the popularity of football to create a complete holiday package ready to be purchased by American consumers from all economic backgrounds. In 1939, President Franklin D. Roosevelt even changed Thanksgiving's date to the third Thursday in November to extend the Christmas shopping season. Thus, what started as a middle-class holiday eventually became a near universal American tradition bolstered by consumerism.

The Thanksgiving package proved so popular because it stayed true to its original 19th century domestic roots, as 21st century Americans who celebrate Thanksgiving continue a holiday tradition of family togetherness and celebration of national bounty that stretches back to the Civil War. They embrace the opportunity to purchase the necessary culinary ingredients from stores and return home to prepare an epic meal to be enjoyed in the embrace of friends and family. Heck, even football couldn't avoid Thanksgiving's domesticating power. Football games, Pleck reminds us, were televised by 1956, a process that fully incorporated a previously external Thanksgiving tradition back into the domestic setting, where the holiday began. American families eventually rescheduled their Thanksgiving dinners so as to finish scarfing down their holiday bounty in time for the TV kickoff. The football field entered the living room, demonstrating the continued power of the holiday's domestic origins.

Even as Thanksgiving became the thoroughly commercialized subject of print and TV, it still gave American consumers the chance to buy all the ingredients necessary to create the annual celebration of domestic American bounty. This element of domesticity remains essential to the holiday’s popularity. As social scientists Melanie Wallendorf and Eric Arnould note in their study of Thanksgiving consumption, "Thanksgiving Day is a collective ritual that celebrates material abundance enacted through feasting," and nowhere is the American notion of abundance better demonstrated than in the form of a glorious, table-leg punishing November repast prepared at home.

The importance of home in American culture dates back to earlier historical traditions of westward expansion, homesteading and the Jeffersonian ideal of the virtuous, independent Yeoman. The notion of home, a domestic setting out of which the American dream can be experienced, has fueled Thanksgiving's staying power. While the market economy makes all material domestic comforts available to nostalgia-craving consumers, the key point is that those products, whether they be turkeys, cranberries or football, are consumed for use in the home, where the real Thanksgiving magic occurs.

In keeping with Thanksgiving's 19th century origins as a celebration of American freedom, prosperity and abundance via the domesticated ritual of a grand, gobbler-centered banquet, contemporary Americans continue to gather around the table each November in pursuit of good food, good company and good ole’ American freedom. So, as you prepare to partake in this storied tradition of food, family, freedom and football this Nov. 28, know that you're continuing a hallowed ritual in which American national identity is reaffirmed with every excessively caloric lump of mashed potatoes and every couch-ridden food coma patient. President Lincoln would be proud.