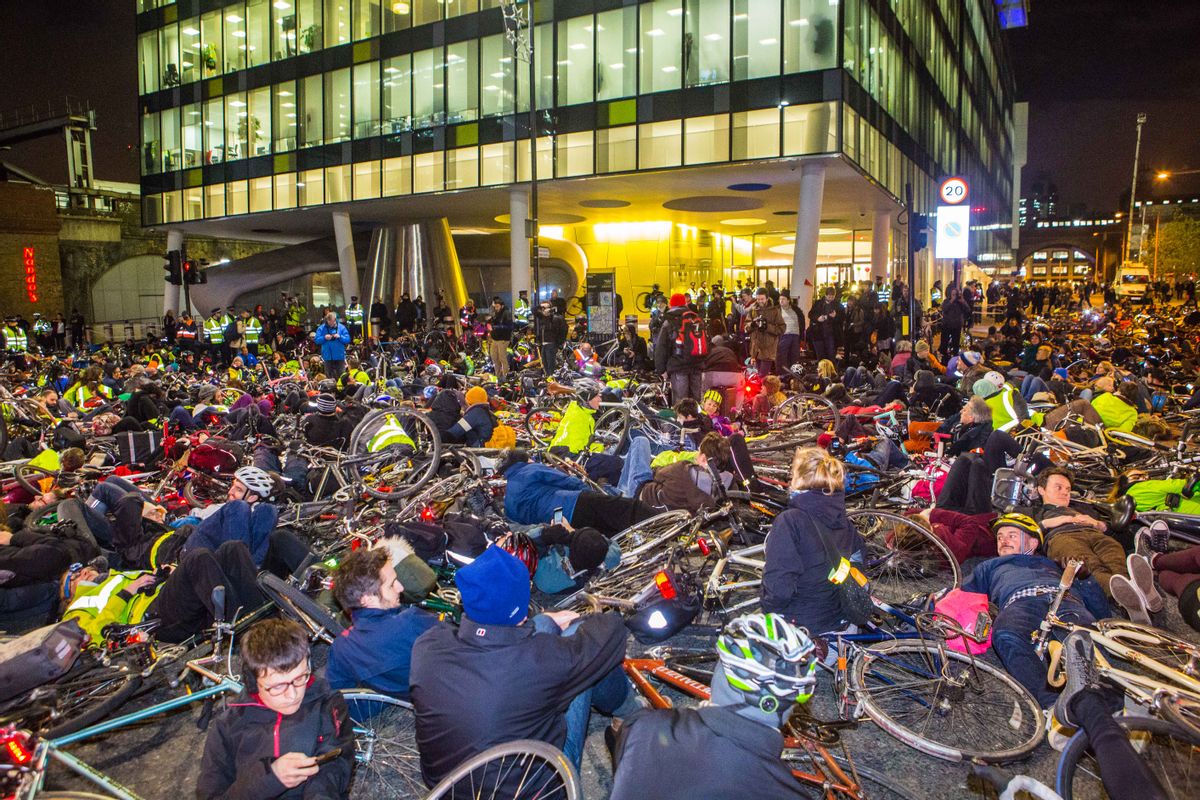 "We are here because Londoners are fed up of being killed," an organizer announced Friday at a protest spurred by the recent deaths of six cyclists in the city. Over a thousand cyclists showed up to the "die-in," in which the protesters strewed their bodies and bicycles across a major road outside the government transportation office, lying there in silence for 15 minutes.

Growing dissatisfaction over London's dangerous cycling culture was driven to a head after Mayor Boris Johnson engaged in some blatant victim blaming earlier this month. "There's no question of blame or finger-pointing," Johnson was widely quoted as saying in response to a spate of five deaths over nine days. He then went on to continue: "But unless people obey the laws of the road and people actively take account of the signals that we put in, there's no amount of traffic engineering that we invest in that is going to save people's lives."

The protest's organizers are calling for 10 percent of each boroughs transportation budget to be dedicated to cycling infrastructure. They argue that an operation launched earlier last week, which penalized over 2,000 bikers and drivers for various highway offenses, won't do nearly enough to prevent future deaths.

John Stuttle, who writes the Guardian's bike blog and attended the protests, explains why Johnson's comments missed the mark:

We felt that the real problem was the lack of cycling infrastructure that puts cyclists alongside HGVs [heavy goods vehicles] and buses in an inherently dangerous way, especially given the huge blind spots that most HVG drivers have to contend with.

While bikers are sometimes guilty of running red lights and otherwise behaving recklessly, he went on to argue, even those who take every possible measure to protect themselves are at risk:

However, the statistics we do have show that it is far more often the driver rather than the cyclist who is at fault in a collision. My guess is that, like most London cyclists, the majority of those killed probably were wearing hi viz [high-visibility clothing] and helmets and probably were not breaking the highway code.

Hi viz will not save you if the lorry driver can't see you because of poorly designed cabs. A helmet won't protect you from a 20 ton lorry or bus's wheels. Abiding by the rules won't help you if there is inadequate provision to segregate cyclists from the heavy vehicles we currently have to commute alongside every day.

As more cities look to adopt or expand bike share programs and encourage green forms of transportation, the situation in London -- which has seen a nearly three-fold increase in bikers over the past decade -- is worth paying attention to. A poll Monday revealed that a full fifth of the city's bike commuters gave up on riding to work following the high-profile deaths; 68 percent said they didn't believe the roads were safe to cycle on.