After a woman who was denied an abortion had a harrowing miscarriage, the ACLU sues Conference of Catholic Bishops 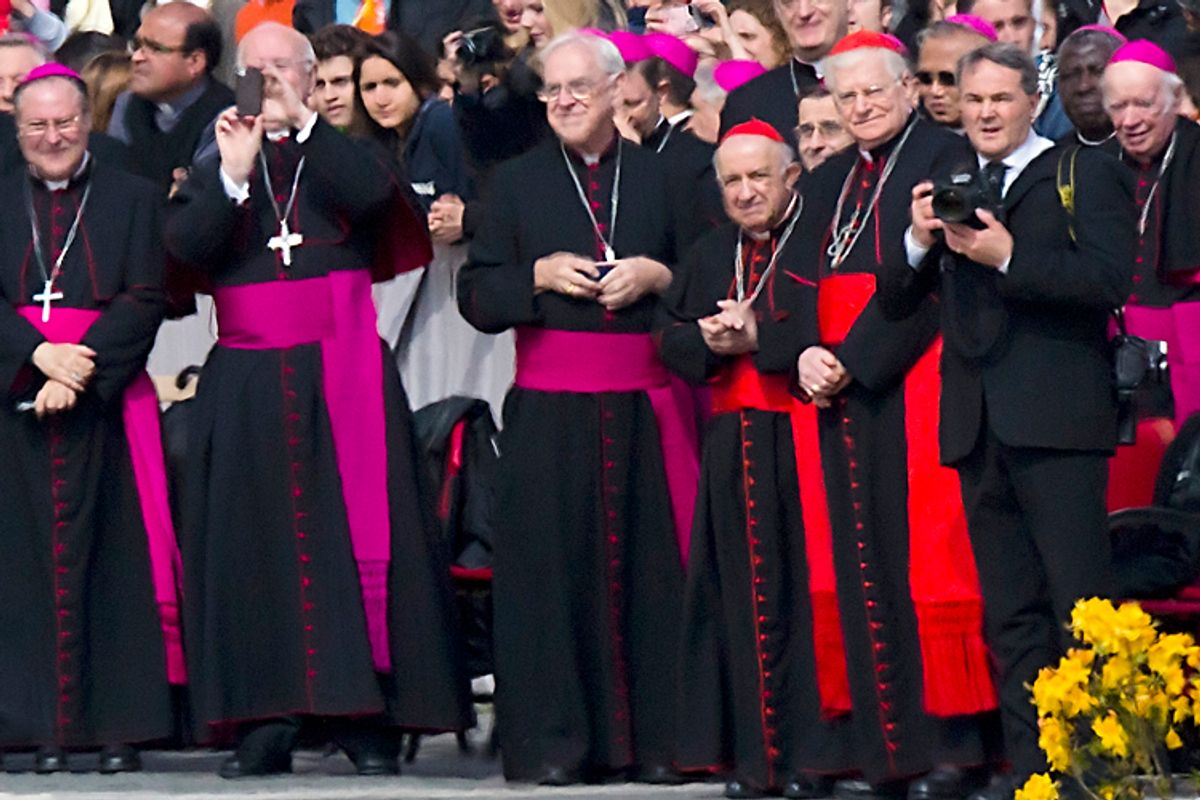 Bishops and Cardinals in St. Peter's Square at the Vatican, April 3, 2013. (AP/Domenico Stinellis)
--

One of the greatest lies the so-called "pro-life" movement ever perpetuated is that every woman seeking an abortion is doing it solely because she doesn't want a baby. It's a vicious fiction that ignores the emotional, financial and medical complexities of women's lives – and often puts them and the fetuses they carry at grave risk. But a new lawsuit announced Monday by the American Civil Liberties union hopes to change the narrative, and expose the grim hypocrisy of letting religion guide women's medical treatment.

The ACLU's suit against the United States Conference of Catholic Bishops is on behalf of Tamesha Means, a Michigan woman who says three years ago she was denied appropriate medical care at Mercy Health Partners. Means' odyssey began when she went to the hospital after her water broke when she was only 18 weeks pregnant. And there, as the ACLU explains, "Based on the bishops’ religious directives, the hospital sent her home twice even though Means was in excruciating pain; there was virtually no chance that her pregnancy could survive, and continuing the pregnancy posed significant risks to her health. Because of its Catholic affiliation and binding directives, the hospital told Means that there was nothing it could do and did not tell Means that terminating her pregnancy was an option and the safest course for her condition." The suit says that it was only when she returned to the hospital again and began actively miscarrying on the premises that they treated her. "They never offered me any options," she says. "They didn’t tell me what was happening to my body." Speaking with the Washington Post Tuesday, Means  added, "The pain was unbearable. I told them, 'I need you guys to help me.' They told me there was nothing they could do."

The ACLU says Catholic hospitals like Mercy are required by the church to follow the Ethical and Religious Directives for Catholic Health Care Services, which bans a pregnancy termination under any circumstances, "even when there is little or no chance that the fetus will survive, and the life or health of a pregnant woman is at risk." This is an extreme stance, even by Catholic standards -- there is ongoing debate in the Church over whether its famed "double-effect" teaching of allowing one "wrong" to avoid a greater one would permit intervention to save the life of a mother. And the Ethical and Religious Directives state that "Operations, treatments, and medications that have as their direct purpose the cure of a proportionately serious pathological condition of a pregnant woman are permitted when they cannot be safely postponed until the unborn child is viable, even if they will result in the death of the unborn child."

Yet time and again, we see harrowing outcomes when Catholic facilities refuse to step in for pregnant women in dire conditions. Means and her attorneys contend she "suffered unnecessarily" even after it became clear her pregnancy was doomed and "the medically appropriate treatment option of terminating her pregnancy" should have been offered. The ACLU says it has other stories of "patients being denied information and appropriate care at hospitals bound by the bishops’ directives" as well. They're likely not hard to find. In 2010, Arizona's St. Joseph’s Hospital and Medical Center lost it Catholic affiliation after terminating a pregnancy that hospital administrators said was necessary to save a woman's life. And Means' tale has echoes of the headline-making death of Savita Halappanavar and her baby last year in a Galway hospital, and the terrible human toll that nonintervention on religious grounds takes.

The sticky moral issues of being true to the directives of a religion while running a business that caters to the general public are not always easy to put into practice. What happens when the teachings of a faith conflict with the needs of a community? The American Catholic church has in recent years found itself awkwardly shutting down its adoption services rather than permit gay men and women to become parents, and petulantly fighting to block basic reproductive health care coverage for women. These are complex, high stakes issues that challenge long-standing and deeply engrained attitudes and policies. But they must be addressed and they must be changed.

Now, as we find ourselves in the midst of what the Washington Post calls "a wave of high-profile mergers between Catholic hospitals and secular systems," for the safety of mothers and children everywhere, we need to get our priorities locked down very clearly. The barbaric policies of Catholic Health Care Services are not, as so much of the adorable baby imagery of the anti-choice lobby wants you to believe, about saving "innocent" lives. They are about selfishly disregarding the medical realities of pregnant women and their babies – not all of whom are healthy and viable. Earlier this year, the wise and deeply thought provoking "After Tiller" took on the realities of abortion, and showed that sometimes, as Doctor Susan Robinson says, "You have choices. They all suck." But having sucky choices is better than none at all. It's hard enough to endure losing a baby when you have a compassionate team of doctors and nurses to help you through it. It's monstrous to be forced to suffer through it and have that help refused. And religious ideology has no place in medical treatment, period.