Molotovs and monitor lizards on the front lines of Thai "coup"

As the Thai government alleges treason, the opposition struggles to advance its invasion campaign. (DRONE VIDEO) 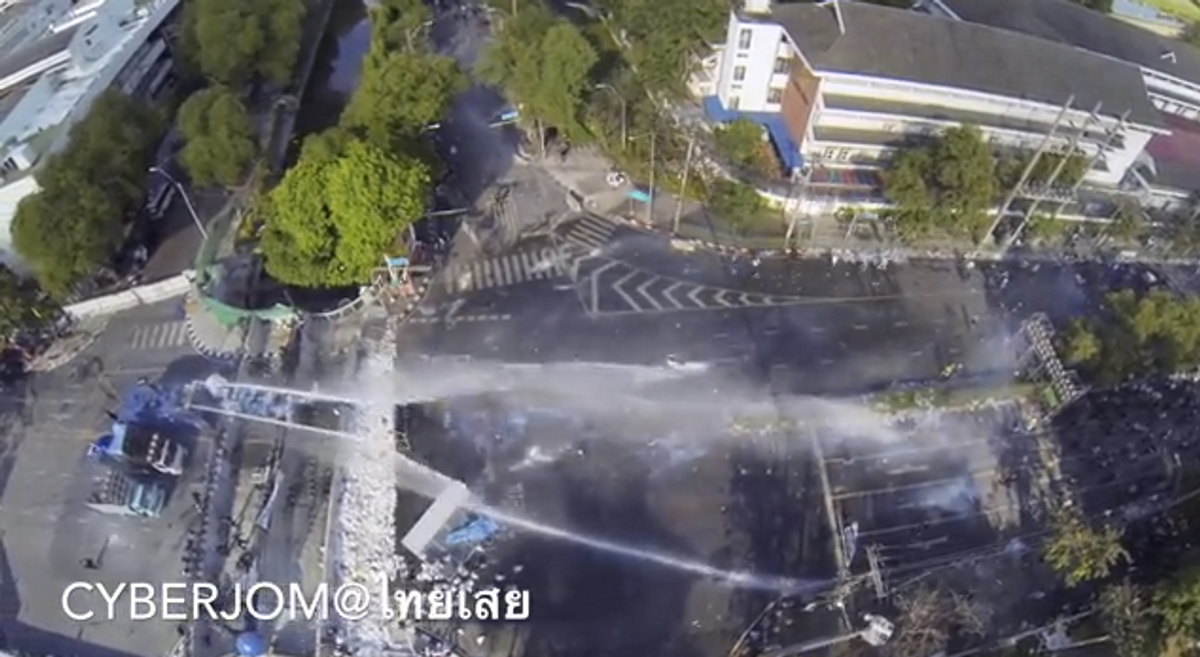 BANGKOK, Thailand — By the dozens, they charge headlong at police ramparts built of concrete and razor wire. And by the dozens they are repelled, wet and stumbling, eyes blinded by stinging tear gas clouds and clothes soaked by water cannons.

They are the foot soldiers of a movement to overthrow Thailand’s elected leaders and install an unelected politburo-style council of wise, virtuous rulers. Its backers — who deride the government as corrupt to the roots — call it a “people’s council” that can cleanse Thailand of dirty politics. Key ministers from the ruling party, popularly elected in 2011, call it something more radical: a coup attempt.

“What they’re proposing will not lead to a peaceful end,” said Education Minister Chaturon Chaisang of the ruling Pheu Thai party. If successful, the protest movement will have enacted a “different type of coup,” he said. “That can only be done by tearing up the constitution and rewriting the whole thing.”

Having occupied several of Bangkok’s core ministries, the protest faction has focused on the crown jewel of government strongholds: the central compound of the Thai premier, Yingluck Shinawatra. While most of Thailand’s capital carries on normally, the compound’s perimeter and several other government offices are under siege.

The would-be invaders are nothing if not determined. Seizing the compound requires overcoming high cement battlements, a field of barbed wire and a polluted moat teeming with monitor lizards, which occasionally surface to glance disinterestedly at screaming protesters.

They are also up against a steady barrage of tear gas canisters, torrents from fire hoses and rubber bullets. Anyone who could possibly withstand all that would face battalions of police in heavy riot gear.

Despite the odds, protesters have tried to storm the barricades. There are small victories: a tear gas canister lobbed back at police or a concrete barrier fixed to rope and tugged down by strong men. They have more recently taken to lobbing stones and molotov cocktails.

On the front lines, there are a mix of demeanors. Some are stressed and seemingly in over their heads. Some behave coldly and tactically and operate in groups. Others are having the time of their lives.

A consumer drone piloted by a Thai spectator, calling himself “TheCyberJom” on YouTube, offers a vivid aerial view of the attempted invasion:

Regardless of whether they manage to storm the premier’s compound, their ultimate goal of overthrowing Thailand’s ruling party now looks elusive. In a nation desensitized to scenes of protesters seizing key government buildings, this attempted siege was atypical: The police have so far succeeded in protecting the compound for two days straight.

“We’ll keep fighting but I’m tense,” said Banya, a 40-year-old protester, his eyes strained and pink from tear gas clouds. “We’ll quit when the government quits. They say they won’t use violence. Well, we’ve seen four men hurt just today. How is that not violent?”

The movement, calling itself the People’s Democratic Reform Committee, is also backsliding. Its protesters, scattered at various seized government offices, appear to be down to 70,000 people (according to police) from a high one week prior of more than 100,000. An estimate cited by Reuters was even lower: 30,000.

On Sunday, leaders of Thailand’s ruling party appeared on state television to warn the movement’s chieftain — Suthep Thaugsuban, himself a former deputy prime minister — that his actions amount to treason and could be punished with life in prison or even execution.

“The occupation of government buildings is not a peaceful means of demonstration,” said Deputy Prime Minister Pongthep Thepkanchana in a separate Q&A attended by GlobalPost. He added that “whoever’s financing this will be prosecuted.”

The movement has also alienated Thailand’s media. Protesters have repeatedly invaded TV stations to insist channels cease airing government reports and instead broadcast speeches calling for the government’s ouster. The Thai Journalists Association decried this move as intimidation and a veteran Thai television journalist, Somkiat Onwimon, asked on Twitter: “When this group is menacing TV media like this, it’s like a type of people’s dictatorship ... that’s not democracy.”

Since the rallies began, several have been killed and more than 60 injured, according to Bangkok’s Erawan Emergency Center, which tallies casualties during crises. At least two of the dead are believed to be allegiant to the Red Shirts, a protest movement aligned with the ruling party that has promised to counter the insurrection. The deaths — which include university students as well — are attributed not to police but to a spate of shootings near the Red Shirts’ rallying point, a stadium on Bangkok’s outskirts.

This uprising is just the latest in a series of attempts to dismantle a powerful political network helmed by the family of the current premier: 46-year-old Yingluck Shinawatra, the nation’s first female premier. Thailand in the 21st century has been defined by a series of sweeping victories by the Shinawatra camp — which has proven resilient despite military ouster and a wave of court orders to disband their parties.

Looming over Yingluck’s premiership is her older brother, the globetrotting tycoon Thaksin Shinawatra, who was premier from 2001 until his 2006 ouster via army coup. Now based in Dubai, Thaksin lives in exile to escape corruption charges. The degree to which he influences the current ruling party from afar is disputed. His enemies consider him a de facto ruler. The party insists he’s only offering advice.

In recent decades, the Shinawatra clan has risen to the ranks of Thailand’s most powerful political families.

That ascent has brought them into collision with members of Thailand’s old guard: army top brass, patrician families and figures vocal in vowing to defend the supremacy of Thailand’s royal palace, which directly ruled the nation until 1932. The rank-and-file opposition to the Shinawatra siblings draws, in general terms, from the urban middle and upper classes. They also form the voter base for the Democrat Party, Thailand’s oldest. Its political stalwarts, such as Suthep, are the protest movement’s core leaders.

Among protesters, there is a sense of existential dread that their nation will be forever lost to a vote-buying cabal ready to bankrupt the state for personal gain. The Shinawatra camp, in their eyes, entrenches its power through giveaways to rural voters with too little education and too few scruples.

“A new election won’t help,” said protester Anchana Srichamnan, who works in Bangkok’s tourism industry. “In Thailand, there’s a lot of poor, uneducated people. They don’t know what’s going on. You just give them money and they follow you.”