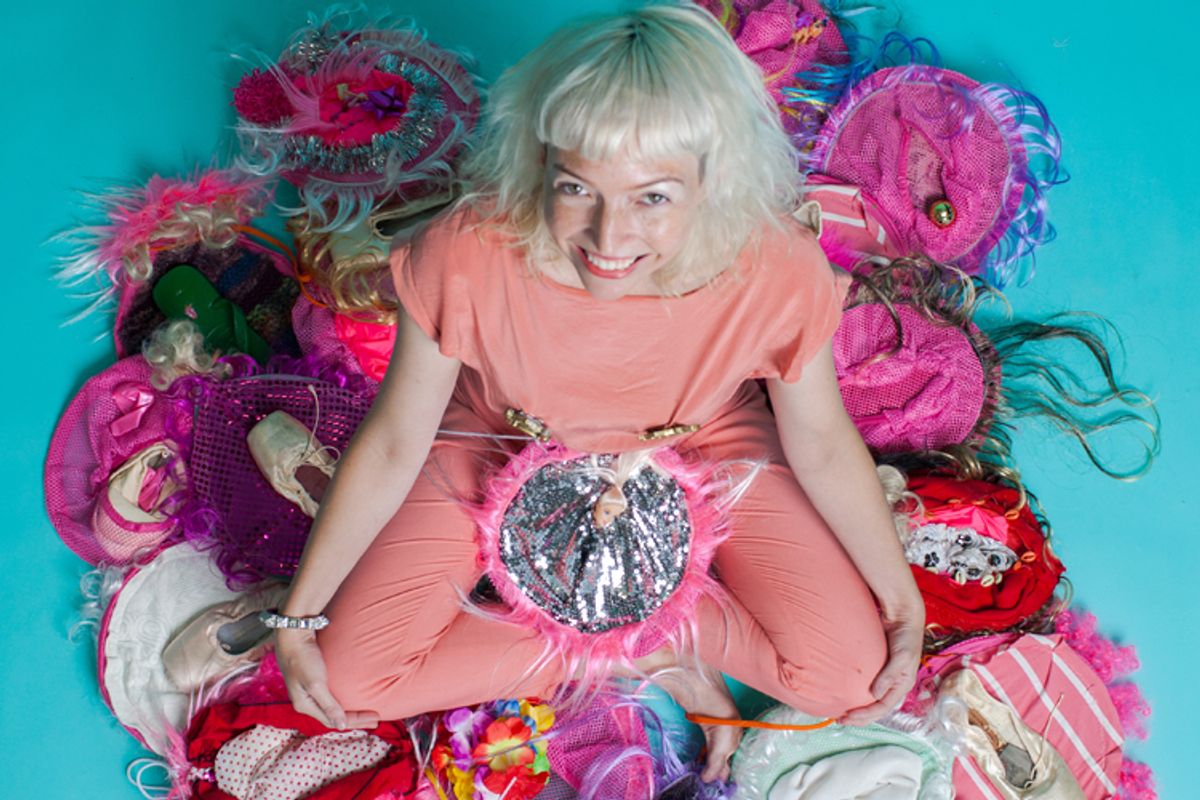 Casey Jenkins didn’t realize more than 2.5 million people would see her vagina. But that’s what happened after a segment she shot for Australian broadcast network SBS was uploaded to YouTube last week. In the video, the feminist performance artist is shown knitting from a ball of yarn she'd inserted in her vagina. Pulling out a thread, the wool having been wound in such a way that allowed it to unravel from the center, she then proceeds to knit one long, unbroken scarf. “I assumed it would be put on the Web, but I thought on their website,” she said. “I didn't know that they had a YouTube channel. So, I didn't anticipate this, no.”

She’s talking via telephone from a laundromat in her hometown of Melbourne. It's the first free moment she’s had to wash her clothes since returning from Darwin where she performed her now viral piece, "Casting Off My Womb," at the Darwin Visual Arts Association. In it, Jenkins spent 28 days in a gallery knitting from the skeins she’d placed inside herself. She explains that the project wouldn’t have had the resonance it did if she’d paused when she began menstruating, but concedes it made the process more difficult “because the wool is wet and you have to kinda yank at it.”

Her motivation, she says, was twofold. The first was a response to the societal expectations heaped upon women of childbearing age — a weight that increases in intensity as the years tick by, which can result in a building sense of panic. “There are a lot of very extreme and loud and clambering responses whenever you try and talk about menstruation or the vulva, or what a body like mine can and should do. I wanted to quiet down all that noise or move away from it to a point where I could spend some time contemplating what I want to do with my own body,” said the 34-year-old. “Really pare it back and just be able to go through a process, spend some time deciding if I want to use my womb to potentially have a kid.”

When I ask if she reached a conclusion at the end of the 28 days, she laughs. “No. I haven't decided whether or not to have a kid, but I have realized that … whatever happens, I feel that it's going to be absolutely fine.”

The other reason for the piece is a bit more far-reaching. Jenkins’ work has long been concerned with questioning and subverting the conversation around the vagina and its place in society, as well as what constitutes women’s activities — in this case, knitting — which has led to the kind of sexist responses one might expect from armchair critics. While "Casting Off My Womb" was well received when Jenkins performed it in Darwin (“The people there, they call a spade a spade and a cunt a cunt”), it has raised the hackles of many an Internet denizen; the deafening roar of disgust and disbelief led SBS to disable the comment field of the YouTube video. “I think that there are misogynistic attitudes toward the vulva, and there's widespread repulsion in my audacity to show it. And then there are also misogynistic attitudes toward knitting, as it's associated with something that women do,” she explained. “There is a dissonance between the two. They're both constructs, patriarchal constructs … and people don't know what to do when they walk together.”

Rather than bend to criticism, she has instead decided to make use of the negative responses — there have been encouraging ones, too — asking friends to take screen grabs of any intentionally inflammatory comments and send them to her so she can create new work from it. “I don't know what I'll do but I'll do something. I find it fascinating and I'm sure there is something in it. I think there is an expectation that I should be put in my place, and a lot of shouting at or about me,” she said, adding that the vitriolic responses only serve to validate the piece. “I'm really not surprised that we're in opposition over this. Their reaction is supporting my work, really. Saying in a very loud way, ‘Yes, we do feel how you say we feel.’ So good on 'em.”

It is this dissidence that connects Jenkins with some of the more radical "craftivists." Coined in 2003 by sociologist Betsy Greer, the term describes anyone using craft as a form of activism. They range from those using recycled materials as a way of reducing waste, to artists like Jenkins who challenge the traditional perception of crafts as women's work and seek to use their art as a tool for political change. To this end, Jenkins formed a collective called Craft Cartel in 2007.

The group runs community workshops that teach crafting techniques that can then be applied to group activism projects, the two most notable manifestations being Knit Your Revolt! and Cunt Fling-Ups. While the former began as a response to the threat of conservative leader Tony Abbott (now Australia’s prime minister) gaining power, the latter involves stitching vaginas out of material before heading out and flinging them over telephone wires in a playful attempt to spark discussion around one of the most dreaded words in the English language: cunt.

“People react so strongly to it that it sort of blanks out all talk. They can't get beyond it and even consider why they're having that reaction. It's such a powerful reaction that it wipes away the possibility of analyzing it,” Jenkins said. “You can't talk about that in public because it's censored. And censorship is done in this way that people say is to be respectful of women, but actually I think censorship is being paternalistic in the end. You know, protecting us from ourselves.”

Citing feminist artists such as Carolee Schneemann and Annie Sprinkle as influences — "Casting Off My Womb" being an obvious nod to Schneemann’s "Interior Scroll" — Jenkins also draws inspiration from other, altogether unexpected peers whose bodies are central to their work, including “countless anonymous performers working in sex bars who are putting things in and out of their vulvas all the time. They're not necessarily doing it to challenge the patriarchy but definitely as a conscious pragmatic way of exploiting the patriarchy, and so they're just as much my colleagues or performers as anyone else.”

But while much of the attention foisted on her at the moment is due to her work with female anatomy, she says her new project is going to be the most scandalous yet. “I've started another piece which will really shock people,” she said with a laugh, “because there is no genitalia involved at all.”