The Mandelas, hip-hop and Cliff Huxtable: How black popular culture can politicize us 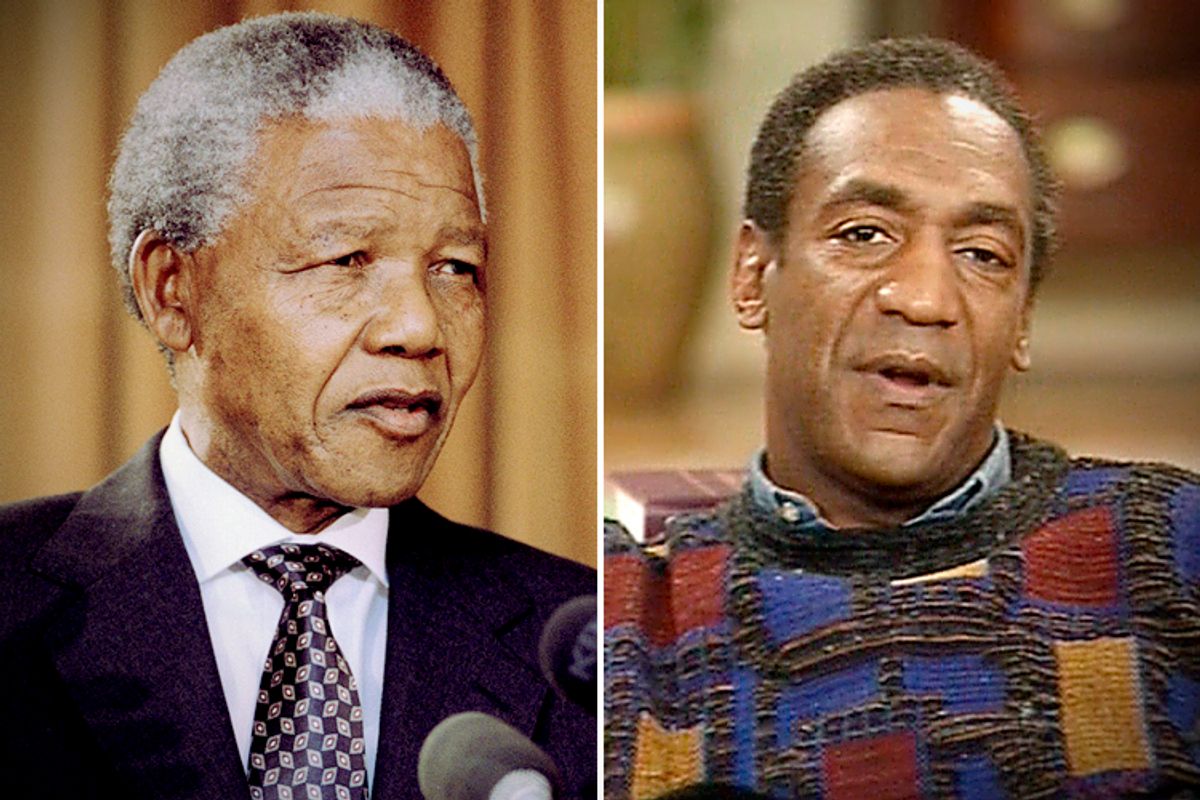 I had just posed a question about emergent definitions of family within the hip-hop generation to a group of panelists at the Gender, Sexuality, and Hip Hop Conference at Tulane on Thursday afternoon, when Melissa Harris-Perry stepped into the room to let us know that Nelson Mandela had indeed passed away.

I felt a pang of sadness. I know people are not supposed to be here forever. I know Mandela fought the good fight and finished his race. Still, his life and legacy has served as an anchor point for my own understanding of the global problem of racial domination. So I was thankful for a moment of silence to gather my thoughts, even as we all tried to deal reverentially with Mandela’s passing in the space of an academic conference about a topic, culture and group not especially preoccupied with being reverent.

Trying then futilely to connect Mandela to the conversation that was happening before MHP’s announcement, I asked again about the proliferation of romantic titles for women in hip-hop culture  – wife, wifey, boo thang, side chick, lil’ buddy, baby mama, ride or die chick, et cetera.

In Mandela’s 95 years, he had three wives, married to each of them for more than a decade. It is clear, particularly based on Mandela’s last two wives, that he liked smart, politically savvy women. Winnie Mandela was a formidable political leader and organizer, having served prison time, much of it in solitary confinement for her role in various revolutionary activities in South Africa, including the Soweto Uprising of 1976. Graca Machel, as former first lady of Mozambique, served as minister of education, and drastically helped to reduce illiteracy rates in that country.

Perhaps it is fitting that I learned of Mandela’s death while attending a conference dedicated to the critical study of popular culture. I first heard the names of the Mandelas in 1988, when the character Sondra on "The Cosby Show" named her twin daughter and son, Winnie and Nelson.

Just two years later in February of 1990, I remember watching news coverage of Nelson Mandela emergence from prison. The look of bewilderment and relief on his, by then, elderly face has remained imprinted in my thoughts over the course of these nearly 24 years.  I was only 9 years old when he walked out of prison, and injustice was only in the beginning stages of making, or rather not making, sense to me.

When I think back to the moment of Mandela’s freedom, I am struck by just how early race education begins for black children, how we must learn about a world that hates us, even before we reach double digits in birthday candles.

A couple of weeks later, the sitcom "A Different World" took up the question of divestment in South Africa, when the character Kim felt pressure to reject a scholarship funded by a company with holdings in the apartheid regime.

I marvel now at the loving context that Bill Cosby created to bring these issues, black issues, into popular American consciousness, particularly since the Bill Cosby of 2013 is not nearly so caring or politically astute. And I’m reminded of a moment in hip-hop culture, when it had not been so fully co-opted by corporate interests, that artists could hold overt political critique, right alongside joy and entertainment simultaneously.

On my way home from the airport after the conference, I stopped to get dinner. Rocking my black-and-white conference tee, I stepped in line behind a young woman of color, who read the “Gender, Sexuality and Hip Hop Conference” logo on front, and said immediately, “I like your shirt!” As we stood waiting for our food, she and her friend continued the conversation they were having before I walked up. She said to her friend, “See, feminists are crazy!” Since she had just been admiring my clearly feminist T-shirt, I was totally confused. “Did you just say feminists are crazy?” I asked. She then showed me a bizarre story that she was reading on her phone about a woman who does knitting out of her vagina, as a way to counter negative messages about women’s reproductive organs.

The young woman balked at the story, signaling that this time “feminists” had gone too far. “Well, I’m a feminist," I told her. "And we’re not all knitting things out of our vaginas.” She then let me know that she didn’t quite buy that there were all these negative messages out there about vaginas in the first place. So I asked her why feminine cleansing products amass hundreds of millions of dollars each year especially since those products often did more harm than good.” “Vaginas,” I told her," becoming slightly professorial, and highly inappropriate, in the burrito line, “aren’t supposed to smell like roses. They are supposed to smell like vaginas.” “I know, I know,” she told me. “Those products can mess up your pH balance.” “Yes, yes!” I said, pleased that she knew this. Still, she shook her head and said, “But the lady knits out of her vagina. And she doesn’t even stop for menstrual cycles.”

I had to admit, the story was bizarre. And I know it’s an odd turn in the story I’m telling here. But I am reminded that at its best, black popular culture can politicize us, and can create opportunities for us to flesh out and feel out what matters. "The Cosby Show" and "A Different World" opened up spaces like that for me. I hope my T-shirt did that for her. Her passionate rejection of the bizarre feminist reminded me of what I love about being a professor: the opportunity to challenge folks to direct their passions into an informed set of opinions.

Still, the burrito line on a cold snowy weekend night ain’t the time to be trying to school people – especially about feminism. But I hope in our few moments together that I was able to convey to this young woman that all feminists aren’t spinning yarn out of the nether regions. Yes, we care about vaginas. We don’t want hip-hop to reduce us to pussy, for instance. And we don’t want our political or personal possibility to be limited to our genitalia. We don’t want our vaginas to dictate the terms of our womanhood or even to demand that a woman is what we should be.

The hip-hop generation feminists I get down with care for the world to know that while Nelson Mandela was locked away for 27 years, a woman named Winnie Mandela rocked the mic, valiantly carrying his legacy, while forwarding her own. Though they didn’t stay married, Nelson Mandela affectionately called her Comrade. Winnie Mandela is to put it like only a true hip-hop feminist could, the prototype of a ride-or-die chick.

And the hip-hop generation would do well to heed Kendrick Lamar’s call that we honor Nelson Mandela by getting our “research” on.

In doing so, we might learn what revolutionary struggle really requires of us, we might have to revisit hip-hop’s brazen love affair with corporations that don’t mean us well, we might put freedom on our minds and liberation on our lips and black power fists on our squared hips. We might find out that Angela Davis wasn’t the first black female political prisoner locked up for fighting for freedom. We might find out just how difficult loving one another is in the midst of revolutionary struggle. We might not be so quick to romanticize what it means to be ride-or-die, because death is certain, and the wheels give way far too often. We might recognize that there is shit worth dying for, and that most of the black folks dying ain’t dying for shit. We might hold on to life a little more tightly. We might rebel. We might read more. We might love better.