“I hate reading short stories, but I like your book OK”: Story writers tell all

Nina McConigley, Laura van den Berg, Kelly Luce and Claire Vaye Watkins on the art of (and bias against) the story 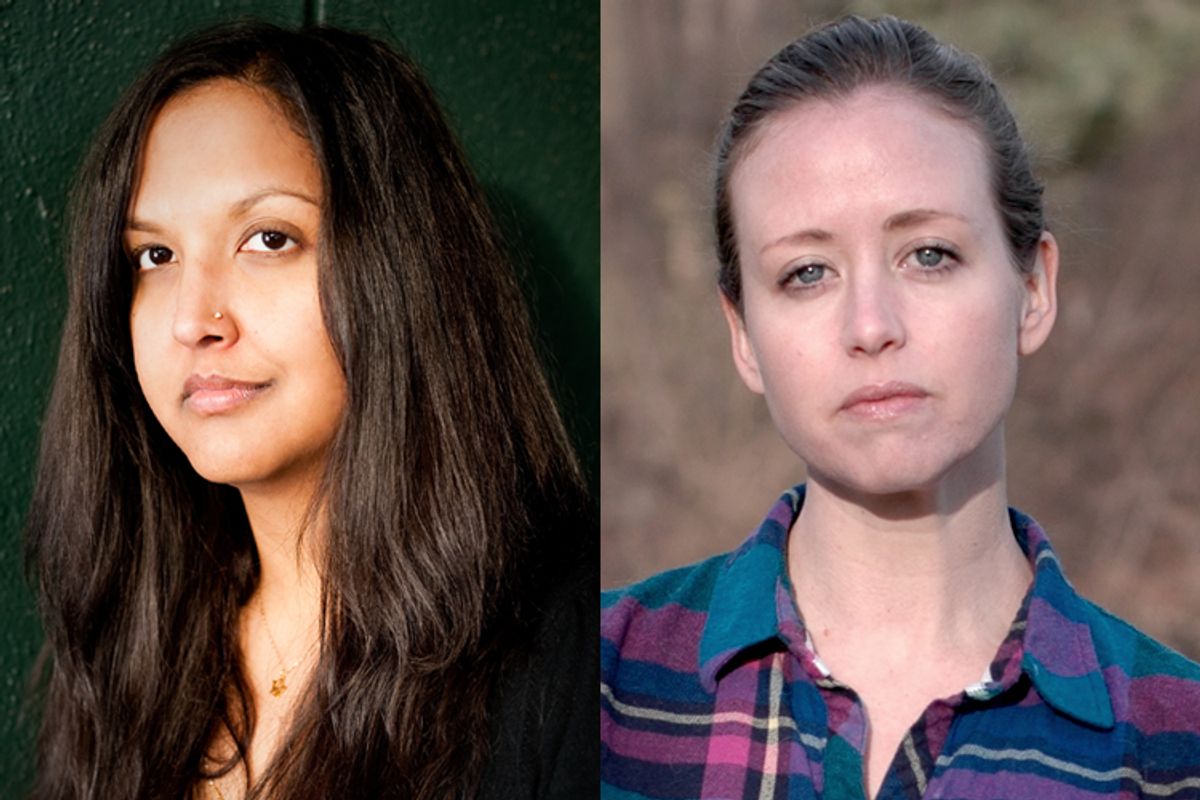 Not long after the announcement that Alice Munro had won this year’s Nobel Prize in Literature, there came the tidbit of news that an editor at Knopf had rejected Munro’s first book of stories partly on the basis of her chosen form. “There’s no question that the lady can write but it’s also clear she is primarily a short story writer,” wrote the editor, in 1971.

But the collection was eventually published, as were Munro’s subsequent 13: Her subtle, formally bold stories have reached an increasingly broad audience in the past 40 years. In this interview, I talked to four young writers with recently published collections that share Munro’s boldness and subtlety: Kelly Luce (“Three Scenarios in Which Hana Sasaki Grows a Tail”), Nina McConigley (“Cowboys and East Indians”), Laura van den Berg (“The Isle of Youth”) and Claire Vaye Watkins (“Battleborn”). You’ll want to read their stories now; you may well want to read them 40 years from now.

Claire Vaye Watkins: A story is a novel that doesn’t take as long to read. I mean that with complete sincerity. In my mind, the fundamental endeavors and capabilities of the two forms are exactly the same, only the mechanisms differ.

Kelly Luce: A hot piece of popcorn with a little salt.

Nina McConigley: Hmm, then, to me, a story collection is like a bouquet. There is an economy in the story form that I find very appealing. I wanted to write about Wyoming, and writing stories was the only way I could do it. I wanted to show as many different perspectives, as many different lenses about the place that I could.

If you were to describe your collection in a line or two, what would you say it’s about?

McConigley: My collection is about East Indians in Wyoming. I am interested in writing about the rural immigrant experience.

In this collection, did it feel important to take risks in form or content? If it did, what felt like the biggest or bravest risk?

van den Berg: It did, yes. Certainly I have some recurring preoccupations, but I didn’t want to just repeat what I did in my first collection. I took some risks with voice/point of view — one story in "The Isle of Youth," “Lessons,” is narrated from the point of view of teenage bank robbers — and also by writing some longer, more intricately plotted stories than I have in the past.

Watkins: Absolutely. I didn’t want to bore myself. Not sure I’d say bravery was involved, more like restlessness, curiosity and promiscuous reading habits. Though it always felt embarrassing and a little bold to admit I was working on a 9/11 story.

Luce: It always feels important to take risks, yes, since that’s the kind of fiction I like to read. The risks in "Hana Sasaki" are more in content than form, though the title story certainly experiments with both. The biggest risk, to me, was incorporating the fantastic/magical elements — there are infinite ways to screw up a story, and being gimmicky is a big one I tried to avoid.

McConigley: I think talking about race and identity can always be tricky. I love Wyoming very much, and love the people I grew up around — but the flip side is I grew up being in the minority and being a bit isolated. I wanted to write about that, but to do it in a way that still respects where I come from. That conversation can always be a little hard, but I want to have that conversation.

Do you feel despair while writing? If so, what do you do about it?

van den Berg: All the time. But, paradoxically, the only thing that helps when I’m feeling despairing about writing is to write.

Watkins: Complicated question. I feel bad when I’m writing, yes, lost and frustrated and doubtful. But I’ve seen despair, have seen people struggle with it, and have, rarely, felt it myself. The bad feeling I get when writing doesn’t approach despair. It’s important to me, for artistic and ethical reasons, not to fetishize the work of writing. It is simply a difficult endeavor, and I struggle to do it well.

Luce: Oh yeah. Despair is part of the ebb and flow of the creative process. At least, that’s what I tell myself in order to avoid despair-about-feeling-despair. Taking a walk helps, as does a nap, time in nature — things that let the brain unravel and the subconscious do some work. Oh, and I like to cook. Cooking lets you feel like you’ve accomplished something sort of creative.

McConigley: The writing process is usually enjoyable. That said, the publishing process has made me feel a lot of despair. It was a long road to sell my collection — most of the rejections said they’d love to see a novel. But I really loved the book, so I just tried to keep writing and working. To keep writing was the only way I knew to work through it.

What draws you to the story form?

van den Berg: The intensity, the economy, the pressure.

Watkins: When I started writing, stories seemed like the best place to learn. A story is savage, unforgiving of error and inelegance, and also accommodating to experimentation and tinkering. It’s a good place to fall on your face. The novel was not something one tried, but something one did. Or so it seemed back then.

Luce: For one thing, it’s over relatively quickly, both on the reading side and the writing side. And you can do strange things — employ an off-the-wall voice, or magical concept, or create a narrator who’s fascinating but hard to be around — that may be too hard to sustain in a novel.

McConigley: I think the short story allows you as a writer to explore and complicate a moment. I am drawn to the economy and efficiency in the story form. I’ve been working on a novel now for over a year, and I find myself working on stories for fun on the side. I’m not saying stories are some crazy easy form, but they allow me to try out so many things: I feel much more free to experiment as a writer.

Can you tell me something insightful you’ve learned about your writing from one of your readers?

van den Berg: I once took a workshop with Jim Shepard and he has this term “rate-of-revelation” that has come to mean a lot to me: “the pace at which we’re learning crucial emotional information about the stories’ central figures.” An ever-increasing rate-of-revelation is good; a stagnant r-of-r is not. For me, this means to keep pushing to that next plateau within a story, to not just keeping writing the kind of scene I already know how to write, to not keep showing the reader the same thing.

Watkins: I loved what Antonya Nelson said in her New York Times review about the first story in the collection working like a core sample. That metaphor hadn’t occurred to me but it’s exactly right.

Luce: Last year, someone I didn’t know (but who had read some of my stuff) correctly guessed that I’m an only child. When I asked how she knew, she pointed out that my characters never have siblings. I’d never even thought about that. It’s true; only one story in "Hana Sasaki" focuses on a sibling relationship, and my novel and other stories I’ve written are super brother-and-sister-less.

McConigley: I had several workshops at the University of Houston with Antonya Nelson. She is the best teacher. She was someone early on who pointed out my stories tended to ramble over weeks and months, and she really made me question why I was covering so much time. I learned a lot about compression from her.

Conversely, what, if anything, has been said about your writing that you’ve found to be mistaken or even obtuse?

Watkins: I always get a bit bummed to hear people say the book made them fear or pity Nevada. That’s not what I was going for.

Luce: People don’t talk about my writing enough for me to have an answer. Any criticism I get tends to be pretty accurate.

McConigley: That I can’t talk about race.

Watkins: The short story has become the poster child for our collective nostalgia about a time when writers enjoyed a wider audience, when more people read, when one could make a living on one’s writing, etc. Maybe that's true, maybe not. I don’t give much thought to any of this. I just write what I need to write, what excites and challenges me. If I was worried about massive audience and tons of money, I’d write sitcoms.

Luce: Whenever I see an article on the "fate" of the short story, I'm reminded of the young-lady magazines I read as a teenager. THE FATE OF THE SHORT STORY is for me the literary equivalent of TWELVE SIZZLING TRICKS TO MAKE HIM YOURS NOW! You see it every other month in one variation or another. The short story has more practitioners now than ever, particularly in America, where the number of story-friendly creative writing MFA programs has exploded. People are writing incredible stuff. The form is alive. It's a beast. Alice Munro's win is an outward sign of this, but that's a top-down thing. No one was going to stop writing stories if she didn't win.

McConigley: People love to give stories a hard time. At some readings I have done, I’ve had some people come up afterward and say, “I hate reading short stories, but I like your book OK.” And I am starting to think the short story wariness is a fear of the unknown. I think if most people tapped into a collection, they’d like it.

Can you name a few new and old short-story heroes?

R. O. Kwon's writing has appeared in Ploughshares, the Believer, the Southern Review, and elsewhere. She has been named one of Narrative's "30 Below 30" writers.