The stories my family wouldn't tell: Living through war in Lebanon 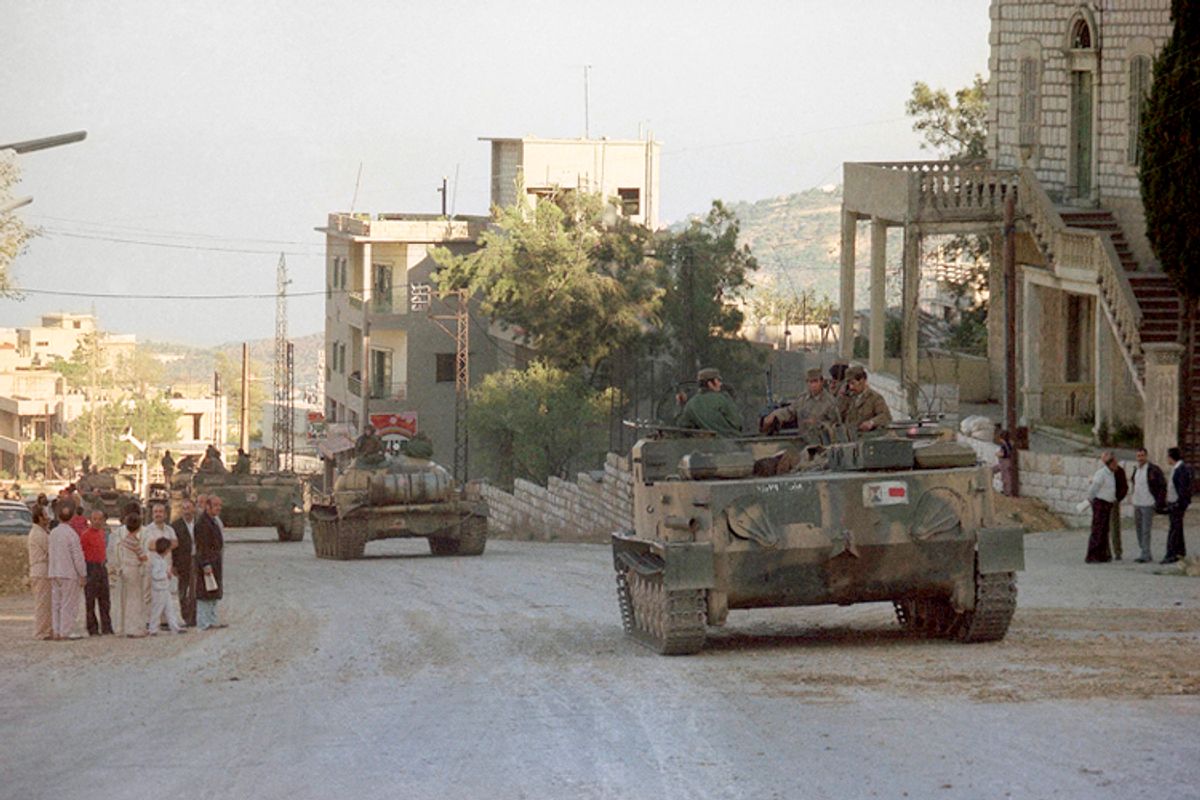 There are things my mom won’t tell me about her childhood in Lebanon. I’ve heard snippets of little Hanadi at a French Catholic elementary school, standing in her underwear because she wore the wrong colored pants — of her crying to her parents because they didn’t save her any escargot from lunch. And I know, at some point, she fell in love with my father, who lived a few houses down the street in their village of Ras Masqa. But details are hazy — hidden — and so many of the years are shaded with clouds of war: a mist that hangs over all memories, blurring the line between the good ones and the bad.

What she would talk about was a dog she had when she was growing up. He was a Sulaki Persian Greyhound named Fox, and my jiddou (grandfather) kept him as a hunting dog. Fox had slender legs and a barrel chest — a fast runner and tireless predator. Sulakis are known better for their tendency to bound off unexpectedly, never to return, than they are for obedience. But it is said that fierce loyalty can be earned from a Sulaki given the right treatment. Jiddou Jalil got him as a pup, and my taita (grandmother) Henriette would cradle him in her arms, feeding him out of a bottle like an infant.

While Jalil wasn’t around, Fox would escort Henriette whenever she left the house, whether she liked it or not. If she went to the market, to church, to the man (now old and blind) who ground their thick Turkish coffee by hand, Fox would follow her. He would sit patiently just outside the door or gate, knowing somehow that this was the only thing for him to do until Henriette was ready to leave.

The grocery stores near their town did not sell dog food. At that time, people in Lebanon didn’t keep dogs as pets; the many strays lurking the streets were considered pests. The few people who did usually used them as guard dogs, feeding them from table scraps. But Fox was a prized hunting dog, and a member of the family besides. So Jalil would drive an hour to a meat-packing factory to buy throwaway cuts and giblets to feed the hound. He’d come home with enough to feed the dog for a month. If there wasn’t room in the freezer, he’d take out the human food and let it defrost on the table.

“Well,” Jalil would say to the shocked Henriette, “looks like we’ll have to eat this food now.” According to him, the family could go to the grocery story any time. But Fox’s food couldn’t go bad.

Every other year, Jalil and his friend would drive to Germany to trade in their cars. The trip would take a few months, through Bulgaria and Serbia; he'd stop at roadside stands and buy fine hand-cut crystal glasses, sold by poor Soviet-satellite artisans for next to nothing, and bring them home to sell and give as gifts. One year, sometime before the civil war started, his daughters begged him, “Don’t get a yellow Mercedes!” The color was, for some reason, very popular that year, but Hanadi and Rula thought it made the otherwise classy car look like a taxi. He promised he wouldn’t, but when he drove back into town, of course it was in the big yellow car. They hated it, but after two years he traded it in again, though he doesn’t make the trip anymore. The road from Lebanon to Germany is not what it used to be.

During those times when Jalil was away, Henriette would have to start feeding the dog scraps from the table, since she didn’t have a car, and couldn’t drive to the meat-packing factory for Fox’s usual fare. The Sulaki would look at her, then at the food, then back at her, without touching it, and whine.

“If you don’t want to eat that,” Henriette would scold, as if he should understand her words, “you better pray the one who brings the good stuff comes back."

In July of 1976, about a year after the start of the civil war, news came that Christian forces would begin a counterattack against the Muslim militia. All the schools closed, and the last thing on the dissolving government’s agenda was making sure teachers were still getting paid. This put Jalil, a physical education teacher, out of work, and the family in danger. My mother told me they left to live with a family in Tartous, Syria.

They had to leave Fox behind at the house, with my mother's aunt and grandfather. The two of them stayed in the town with seven or eight other elderly people who couldn't travel, along with my father's family and a few other stubborn Lebanese — though my father told me the decision to stay near nearly cost him his life. But part of me can’t blame them. In a place and time like that, leaving meant abandoning everything; you might come back to find your house still standing, but what would be left of your life when you returned?

When the fighting finally reached Ras Masqa — at that time the last town before Tripoli, and what became the stalemated front line between Muslim and Christian forces — militiamen on both sides swept through the streets, shooting cats, dogs, birds — every animal they found — so that their barks and screeches wouldn't give away the soldiers’ positions to their enemies.

Fox was the last dog they ever had. My grandfather was too heartbroken to replace him, even though he had owned hunting dogs all his life. And my mother, though it is clear she loves dogs, and never hesitates to baby-sit my sister’s or the neighbors’ dogs, has always refused to get one of her own. Growing up she gave other reasons: She didn’t want to clean up after it, or didn’t want it scratching up the furniture. But now I know this isn’t the truth — not the complete truth, anyway.

I also know that what she said about going to live with a family in Tartous wasn’t the complete truth either. They did go to Tartous, but they lived by themselves in a single room, with no electricity, no bathroom and no water. All seven of them — jiddou Jalil, taita Henriette, my mother Hanadi, age 14, aunt Rula, 12, uncle Michael, 8, uncle Chadi, 2 and a half, and my aunt Nidal, just 8 months — slept on two mattresses pushed together on the floor, with a single kerosene lamp for light, and a kerosene stove for cooking and heat. They left Ras Masqa in a hurry, with the clothes on their backs and no money, not knowing how long they would be gone. Jalil taxied people from Tartous to Damascus so the family could eat. They lived that way for four months, though it would be almost a year before they could return home.

This is what my mother wouldn’t talk about. Those days spent crowded in that room — the oldest of five children in exile, her mother still nursing the youngest, and her father gone for most hours of the day. Those days of her life she wouldn’t share with me. Not yet, at least.

No, that story was told to me by my grandfather Jalil. But Jalil, he wouldn’t talk about the dog.

Ashley Bouchahine is 22-year-old Lebanese American writer, currently working on a collection of non-fiction short stories about her family's experiences of civil war and emigration around the world.