The Internet is one giant hoax

Shia LaBeouf reminds us that everything online is just a remix of something else. So why are we paying attention? 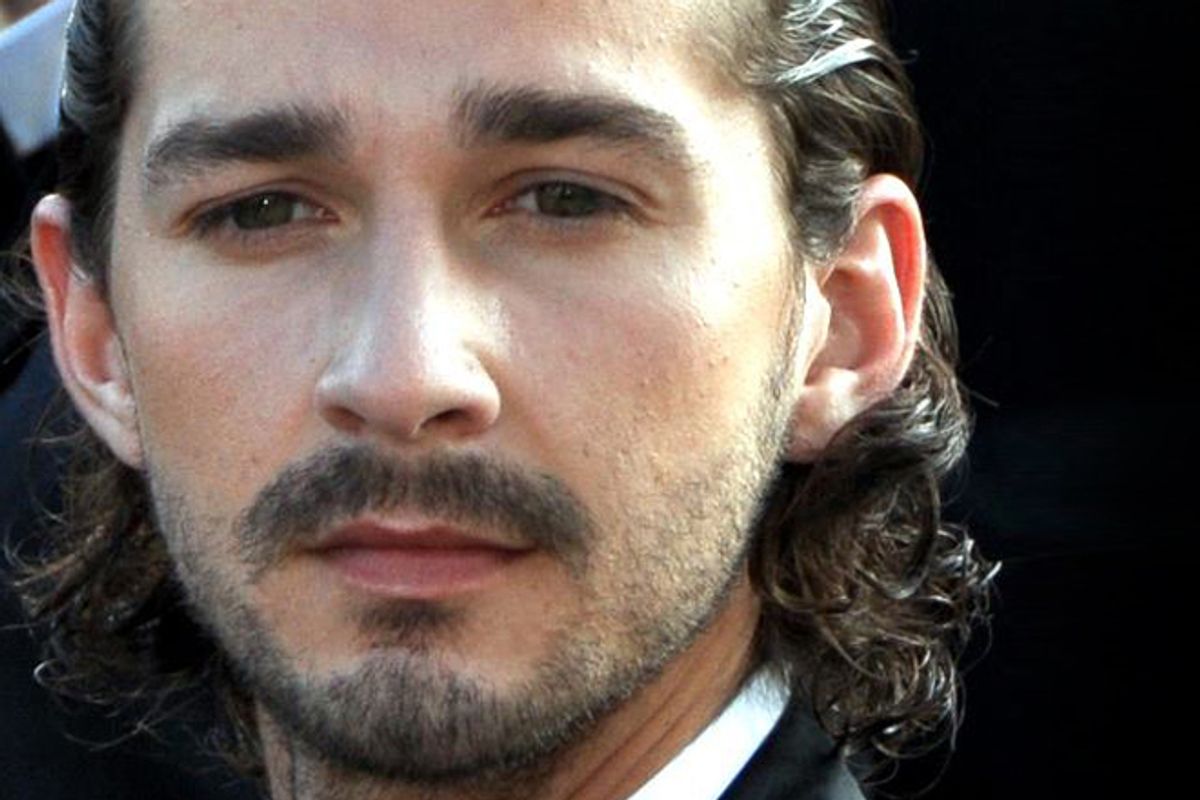 Shia LaBeouf has made the Internet slightly weirder and angrier than usual this week, at least in film critic and pop culture circles, when it became clear that he’d ripped off dialogue and visuals in his short film HowardCantour.com from a Daniel Clowes comic called Justin M. Damiano. He issued an apology, only it turns out that chunks of that apology are lifted whole cloth from a random entry on plagiarism found on Yahoo Answers that dates back a few years. It also turns out that his description of short films as a form that can “capture the essence of storytelling without the encumbrance of pop-psychology” (punctuation sic, and there’s more) is also stolen from a statement made by British producer Keith Phillips. Short of the Week, the site that debuted the clip the other day after it originally played Cannes last year (yep), has been distancing itself from the film as things have gotten worse.

On one hand, this is not exactly new turf for LaBeouf, who was involved in some pointless tiff with other celebrities earlier this year and decided to scold them all with an email lecture about how to be a man that he’d actually boosted from a 2009 Esquire piece. Frankly, it’s amazing he hasn’t been caught doing more stuff like this already. (Then again, when you release a short film about film critics, you should probably expect that a few of them will do their homework.) He’s also published comics that have ripped off Charles Bukowski and other writers. Perversely, this just seems to be LaBeouf’s thing.

On the other, I have no idea what to believe about stuff like this. I have zero feelings toward LaBeouf one way or the other. He’s made some mostly forgettable movies, and he used to be on the Disney Channel when he was a kid. He’s just this guy, as far as I’ve been concerned. That he’s resorted to plagiarism and intellectual property theft is sad and strange, but I’d be lying if I said it felt surprising.

Part of it has to do with the obvious stuff: on the Internet, everything is a remix, and repurposing content for your own ends is just one of the crappy things we’ve accepted in the social contract that gave us the most powerful communucation tool in human history. At least a quarter of what’s out there is duplicate content. That things are stolen is bad, but it doesn’t feel unusual anymore. That familiarity with piracy, the shrug that greets each successive admission of “I fucked up”, is sad in its own right. (Students try to pull it off all the time, just because the opportunity is there.) But on a bigger level, I honestly don’t know what’s going on in the minds of any of these creators, and trying to untangle their methods and intentions can be frustrating, too. LaBeouf ripped off Clowes, but when called upon to apologize, he plagiarized a Yahoo Answers post about plagiarism. He tweeted another apology on the morning of Dec. 18 that was a copy-and-paste from one Tiger Woods made a few years earlier. He followed that up with yet another apology, this time lifted from Robert McNamara’s statement about Vietnam. Is LaBeouf just screwing around? Did he even care? Does it even matter to him that people think he stole? Does he even think that’s what he did? Could he actually mean what he’s saying, or is he just trolling people? Is he lashing out because he was caught, or because he just likes to get a rise out of readers? What the hell is even happening in his head?

What makes things like this so hard to puzzle out is the fact that so much of what we experience online is fake these days. We’ve been hit with a spate of hoaxes and pranks and just weird stuff lately, from the reality TV producer who acted out a fight with an imaginary enemy on a plane, to a woman who wrote about being poor even though her story didn’t quite check out, to the forwards and repostsand Likes that flood our social feeds with things that are demonstrably untrue. LaBeouf’s behavior isn’t just plagiarism, but part of a broader creative trend by some creative types to spit on the line between real and fake, and to center their output on the discomfort we feel when they confuse us.

There’s a video maker named Casey Neistat who comes to mind, too. After making a few clips that went viral (like this one about the foolishness of bike lanes, or this one about Apple’s former iPod battery replacement program), he was hired by Nike to make a video promoting their FuelBand and the attendant slogan “Make it count.” The video he made positions itself as a rogue assignment, kicking off with a title card that reads: “Instead of making their movie I spent the entire budget traveling around the world with my friend Max. We’d keep going until the money ran out.” From far away, this looks like a screw-you to the man, except Neistat wore the FuelBand and made the video and turned in a project that’s pretty much right in line with Nike’s whole m.o. anyway. So he got to look cool, Nike got to look like they’d both a) been beaten by the little guy and b) played it cool when he made his own special thing, and everybody got to pat each other’s back as the video passed 10 million views. It’s impossible to know just exactly how the whole thing went down, but saying, in essence, “I took the company’s money and did the thing they asked me to do” is not exactly the punk rock move Neistat makes it out to be.

More intriguingly, he just did the same thing again. 20th Century Fox approached Neistat about doing a promo video with the theme “Live your dreams” to plug their upcoming The Secret Life of Walter Mitty, so Neistat said he wanted to take the $25,000 budget and travel to the Philippines and spend it on disaster relief. The studio, per the video, said OK, and the result is this video in which Neistat does just that. Now, again, I have no way of knowing what actually transpired as the video was being planned, shot, and produced — that’s the whole point. All I know is that a guy who helped one massive corporation gain some street cred with a very specific stunt says he was contracted by another massive corporation to do basically the same thing. I have a hard time imagining the studio didn’t see this coming, nor that they were overjoyed at the idea of spending a few thousand dollars to help promote a $90 million film as a force for moral good and not, simply, a piece of holiday entertainment.

So we have an actor stealing things and then not caring about it, a video maker generating street cred for global corporations who don’t need it, and a series of people riding the gullibility of others to modest fame and donated fortune. And at the root of all of it is one thing: we have no idea what these people really think, or believe, or want to do. We have the effects of their actions, and the queasy feeling that comes when we’re tricked, but we don’t know how we got here, and we certainly don’t know what motivates these people to do what they’re doing. It seems unlikely that LaBeouf was unaware of what he was doing, but it’s impossible to tell. It seems unlikely that Neistat isn’t far more involved in the PR nature of some of these stunts, but it’s impossible to tell. It seems unlikely that frauds think they can pull it off, but — well, you know.

What I do know is that it’s wearing me down, and I’m not sure how to find a way out. In addition to hoaxes, the Internet can manufacture rage and indignation with horrifying ease, so each of these stories has been met with anger and vitriol before fading into the background and becoming just one more thing that silently informs our experience of the world. That’s understandable: anger and rage are clear, almost tangible reactions, and it can feel good in the wake of something weird or dishonest to lash out and seek to punish the one that fooled you. But after those, or underneath them, there has to be a way to come to terms with what it means that so much of what’s out there is just artificial or stolen bullshit. We have to find a way to police ourselves, guard our experiences, and — maybe most importantly — shut out the fakes and frauds. I don’t know how to do it yet, but it’s got to stop. I don’t know what’s real or what’s fake anymore, and I don’t want to get to the point where I stop caring about the difference.