Man dresses up as boss for Halloween -- and suffers the consequences

Caught on tape: A Georgia man's Halloween costume spurred an hour-long interrogation, and a four-day suspension 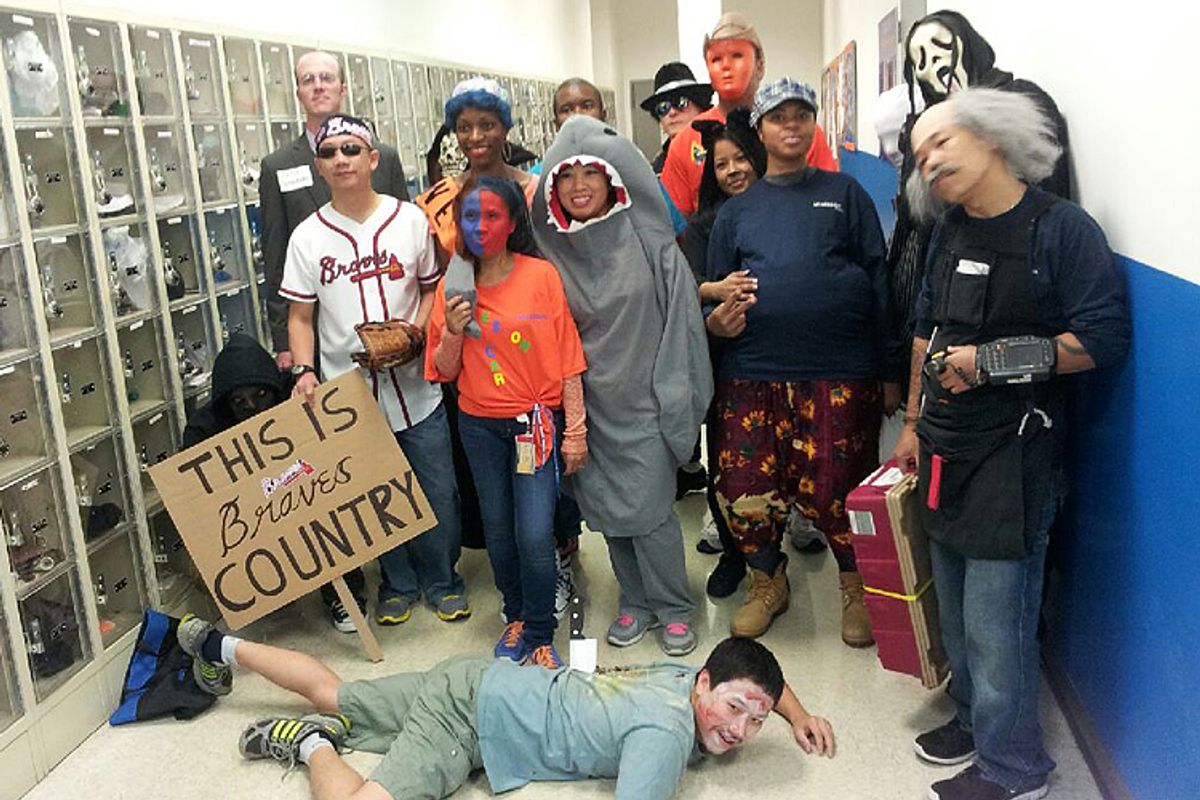 A man who dressed up as his boss at a company Halloween party tells Salon the stunt got him interrogated and suspended for four days – and he has a tape recording to back him up.

“It was meant to be satirical, meant to be fun,” said Bo Whitener, who ships products from a Georgia distribution center for the pharmaceutical company McKesson. He told Salon the stunt was “really a way to come out and say we’re here and we mean business.” The company did not respond to requests for comment regarding the incident or the audio recording.

The costume saga started when Whitener, a leader in a still-ongoing effort to win Teamsters union representation at the Georgia facility, showed up to a McKesson Halloween party dressed up as company CEO John Hammergren. Whitener told Salon he gave out chocolate coins and told co-workers, “You’re not going to get any money here until you get a union.” (Reuters reported that Hammergren's compensation -- including "a $159 million lump-sum pension payment" if he retired -- stirred controversy at McKesson's July shareholder meeting.)

Whitener said fellow employees “were thrilled with it.” But Whitener and the Teamsters allege management ejected him from the party with a threat to call the police, and then interrogated and suspended him once he returned to work -- only bringing him back after the union filed charges with the National Labor Relations Board.

An audio recording provided to Salon by the Teamsters captures what the union says is a Nov. 4 meeting between Whitener and McKesson assistant director of operations Peter Maxfield. Over the course of the conversation, which lasts over an hour, Whitener is told, “I thought you had a pretty good costume” but “what I’ve heard is that, you know, the costume was disrespectful, demeaning of one’s character.” He is asked a series of questions about his Halloween stunt. Among them:

“Tell me a little bit about what happened at the costume contest.”

“How did that [referencing Hammergren’s annual salary] incorporate into your character? ... What did you personally say?”

“Can you give me an example of something you said in there?”

“How did your colleagues take it? ... Did they think it was funny?”

“How many people did you talk to?”

“Can you tell me who you talked to?”

“I was scared …” Whitener told Salon. “I could already tell that they wanted me to give out names … I just tried to remain as cool as I possibly could. I tried to be respectful and say sir.” He also provided the company a written statement.

In the audio recording, Whitener says “everyone played the part” they were dressed as at the party, including a ghost, a serial killer and someone who he alleges “would grab themselves” while dressed as Michael Jackson, “which of course may be somewhat offensive. But it’s a supervisor, so who’s going to say anything?”  Whitener repeatedly declines to say which employees he interacted with while in costume, on the grounds that if he did, “I think that they might be targeted at that point as well” by management. When the manager answers, “This has nothing to do with union – this has something to do with being disrespectful,” Whitener counters, “Well, I don’t believe that.”

Whitener can be heard repeatedly asking for a peer as a witness in the meeting, and being turned down on the grounds that “if we’re going to do a witness it’s going to be like HR,” “this isn’t court,” and “disciplines are private matters that we have with associates.” Early in the conversation, Whitener is told, “You don’t even know what we’re talking to you about. We could have a big old cake in there that says, ‘Hey, We Love You Bo.’” Later he’s told "that usually that involves distrust, if you feel like you have to have a witness in here. Like you can’t trust me. Is that true? I mean, you’re not going to hurt my feelings.” (While Whitener invokes Weingarten rights – a legal right to have a witness present in meetings that could reasonably be expected to lead to discipline – under a 2004 precedent, those rights no longer apply to non-union workers.)

At one point, the McKesson manager asks Whitener, “How is the family doing,” mentioning “your wife and then, is he [your son] 4? Three?” Whitener told Salon that “almost came off as a veiled threat.” About an hour into the meeting, after Whitener says he’d like to have a witness present at his next performance review, the manager answers, “Why so guarded, though? … Again, people that are guarded have distrust.” Whitener is told at various points that he is “not helping yourself out here” by being insufficiently specific, or other variations on that theme.

Under U.S. private sector labor law, it’s generally legal for companies to hold on-the-clock anti-union meetings (a phenomenon Salon has covered at places ranging from the document storage company Iron Mountain, to the artisanal bakery Amy's Bread, to the NBC-owned Peacock Productions), but illegal to interrogate or punish workers because of their participation in “protected concerted activities” aimed at workplace change (as I’ve noted, whether a worker’s activism qualifies for that protection depends in part on whether it’s part of – or designed to instigate – collective action). The Teamsters brought Labor Board charges alleging McKesson’s response to Whitener’s Halloween stunt ran afoul of the law, and – though such charges often stretch on for months or years – in this case the union says the charge was enough to get McKesson to reverse Whitener’s suspension.

Whitener told Salon that after initially telling him he was suspended for disrespect, and instructing him to “take everything that I needed” back home, management contacted him following four days of missed work and told him to come back. He said management agreed to rescind the discipline and pay him full wages for the four days he missed, but “told me to lie to my co-workers and say that I just had some PTO [Paid Time-Off] time that I was taking.”

Whitener charged that the response to his costume stunt was only one aspect of an anti-union campaign mounted by McKesson since he and other workers started organizing to achieve better raises and respect at work. “They are trying to stop people from talking on the line,” said Whitener, and “they showed an anti-union video” and brought in a self-described union member from Florida to tell employees it was “just not worth it.” When he came back to work after the suspension, said Whitener, “it was a nice day,” with “people patting me on the back.” Still, he told Salon, “I wouldn’t consider it a victory … just a step that had to be taken, and we went through it, and still going through it.”