What the NRA's really shooting for: Getting Republicans elected to office

To see how the gun group really does business, go behind the scenes with this candidate as he sought their backing 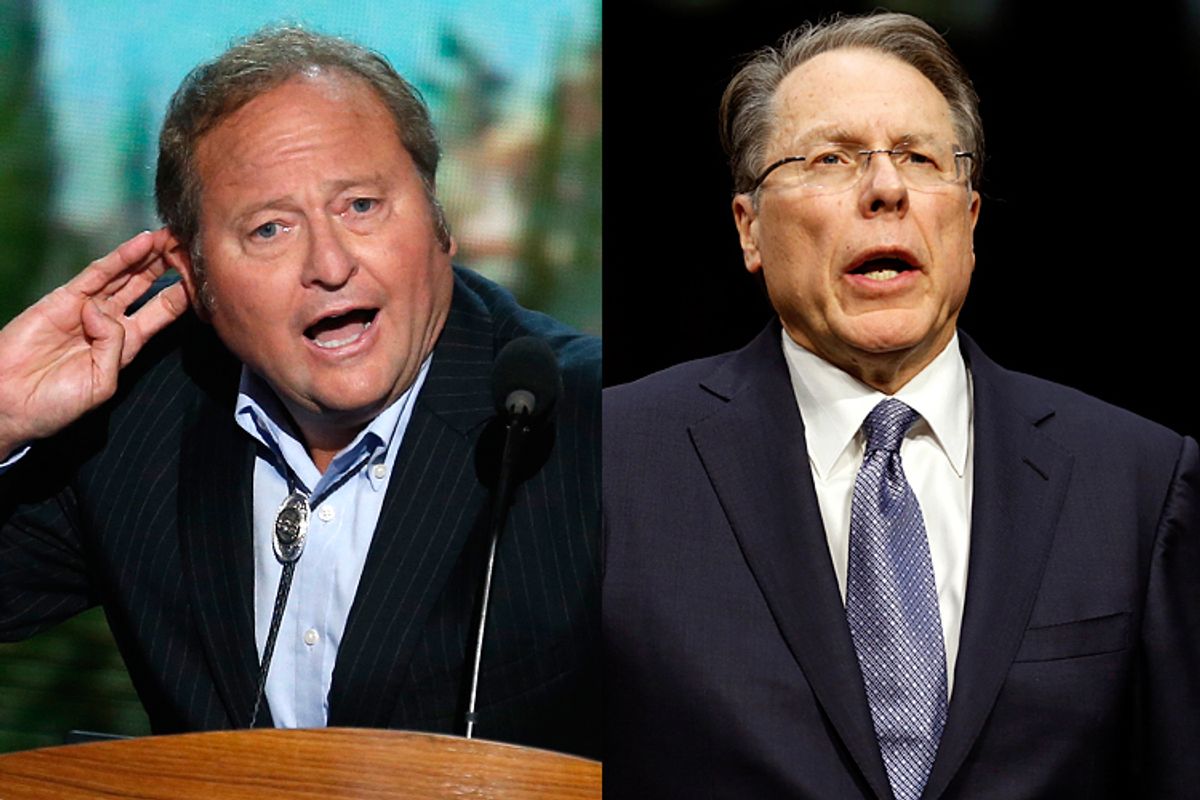 Lately, the question has been asked, is the NRA’s true purpose to push for gun rights, or to elect Republicans (or more precisely, to defeat Democrats)? Here’s a fun story that might help you answer that question.

When Brian Schweitzer first ran for office in 2000, he filled out an NRA candidate questionnaire and mailed it in. The NRA uses this item to rate candidates with a letter grade (A+ to F) and to make endorsements.

Schweitzer (for whom I worked for several years) grew up on a ranch and owned guns and hunted his whole life, and based on his responses to the survey, he figured he would get an A or A- rating. While he didn’t expect the NRA to endorse him (his opponent, the GOP incumbent Conrad Burns, was a lifelong A-plus member),  Schweitzer’s rating would nonetheless be published in the NRA’s annual voter guide, sent to all NRA members. That would be a very valuable credential in conservative Montana, as a counterweight to his liberal social and economic ideas.

But when the NRA voter guide was published, Schweitzer received an F.  He called the NRA to demand an explanation. They claimed they never received his questionnaire. It must have gotten lost in the mail, they told him. Schweitzer faxed them a copy, but they said it was too late. Soon Charlton Heston was visiting Montana, campaigning against Schweitzer, accusing him of being “against gun rights.” The NRA followed up with similar attacks, spending a king’s ransom on TV and radio ads against Schweitzer, for his F rating. He lost by under 4,000 votes.

In 2004 Schweitzer took another shot, this time for governor, trying to become the first Democrat elected in Montana in 23 years.

Once again he mailed in his NRA survey, confident of an A  (I believe that at the time, an A-plus rating was only achievable by answering “yes” to the question, “Do you support the right to possess guns in all places, including schools?”).

For insurance, he met with NRA staff in Washington. They assured him that he was likely to receive the endorsement. But then the voter guide arrived, and the NRA had endorsed his opponent.

Again he demanded an explanation. The NRA said they'd decided that Schweitzer's opponent “should get the benefit of the doubt” because he was an incumbent, whereas Schweitzer had never held office.

Schweitzer won that race narrowly, but rose to become a powerful political force in Montana, upending the old order, turning much of the state from red to blue, and pulling in many other Democrats on his substantial coattails. He also revealed a distinctive quality: He sought revenge against anyone that crossed him, often without regard to the the political cost of doing so. So he naturally couldn’t resist bad-mouthing the NRA on the Bill Maher show one evening in 2007 when the subject of gun politics was raised, accusing the group of being “a fully owned division of the Republican Party ... the National Republican Agency.”

This created an enjoyable situation when, in 2008, running for reelection as a virtually unbeatable incumbent, he notified the NRA that he not only expected an endorsement this time around, but that he wanted Wayne La Pierre, the NRA president, to come do it personally.

The NRA did everything it could to come up with an excuse to not grant the request, but ultimately it blinked. La Pierre, perhaps wary of Schweitzer’s penchant for creating a commotion if slighted, came to Billings in the summer of 2008 for a press conference at which he grudgingly told the TV cameras that Montana gun owners and hunters that they should vote for Schweitzer. (Schweitzer’s challenger was already projected to lose by about 30 points, but for good measure Schweitzer rented a giant billboard right across the street from the guy's campaign headquarters, with an ad boasting of the NRA’s endorsement.)

When the NRA voting guide arrived that fall,  there were Montana candidates endorsed for Senate, Congress, attorney general ... but no governor. Schweitzer called once again for an explanation. They told him that they had no idea how this had happened. The printer must have screwed up. It was a regrettable mixup, and they would try to correct it immediately.

But, of course, they didn’t.