Has sex-positive feminism, despite its victories, forgotten that sex work is actually work, and often quite brutal? 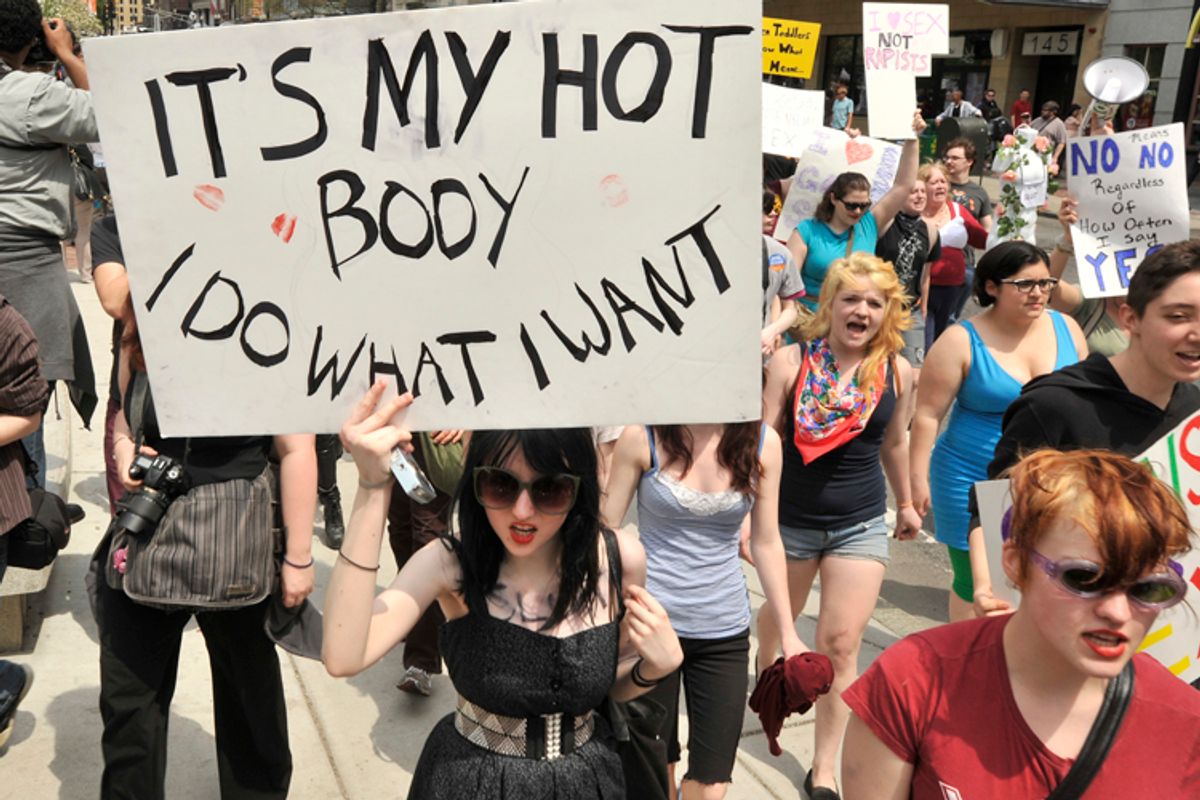 Women march through downtown Boston during the "SlutWalk" in Boston, Mass., May 7, 2011. (AP/Josh Reynolds)
--

The poster said: “I’m a slut. And I vote. So does everyone I sleep with.” Favianna Rodriguez is not a sex worker; she is an Oakland-based artist, a printmaker and an activist ally who works with INCITE! Women of Color Against Violence and other resistance groups. The posters she made for International Women’s Day 2012 came because “I was fed up. Patriarchy is destructive to society, it’s a form of violence against women, and there is no place for it in contemporary culture.” Conservative talk show host Rush Limbaugh had just called Sandra Fluke a “slut” because she wanted Congress to preserve funding for Planned Parenthood: “I decided it was time for some slut positivity and some major ass-kicking of these conservative, woman-hating men.”

“Politicians out of my poontang!” chants and signs about sluts who vote weren’t the polite messages observers expected at the Democratic National Convention in Charlotte, N.C., in August 2012, especially when they were delivered by immigrant women protestors telling the United States, “Keep your government off my pussy.” The message was culturally and politically disruptive. “Straight” people don’t think of “sluts” as voters, much less as a bloc of citizens who would cast their ballots based on issues of sexual liberty and gender-based violence. The message “Politicians out ... ” could also be read as mocking: sex scandals involving public officials and sex workers (or someone other than their spouse) stopped the political rise of more than a few men and women on both sides of the aisle. Why shouldn’t politicians be called out for their hypocritical slut negativity?

Tied intricately to politics, cultural activism seeks to redirect peoples’ attitudes to change public opinion and then policy. For sex-worker activists, years of working to decriminalize prostitution have brought only a handful of legislative and courtroom victories, and many of those were often reversed later. Despite slow progress, negative opinions against sex work and sex workers have lessened, especially among the younger classes of American society. It was perhaps predictable, given the vicious war against sex waged by religious conservatives and anti-porn feminists in the 1980s and 1990s, that some people wanted to find out for themselves what was so bad about sex, porn and queer politics.

"Working Girls" (1987) was an independent, unrated film by director Lizzie Borden, shot in her own Manhattan loft. It focused on Molly’s eighteen-hour shift in a Manhattan brothel, showing the people she worked with and her clients, conveying the banal “daily realities of the job” without judgment or titillation, said Borden. It is still regarded as “the gold standard for realism in prostitute pictures,” writes former $pread editor Monica Shores, in large part because Borden based the characters on women she met — Ivy League-educated, smart humanities majors who were shut out of the yuppie jobs their classmates had. Film historian Mark O’Brien observed that the sex workers’ “marginality is not a function of their otherness but of their ordinariness. They’re too disturbingly like us to be acknowledged.”

Books by sex workers that disrupted what “straight” people thought they knew are one kind of cultural activism. The voices of French putes were heard in Claude Jaget’s "Prostitutes, Our Lives," published in English in 1980, including the women who went on strike in Marseilles in 1973 and in Lyons in 1975 to protest their oppression by the police and the Catholic Church. The memory of that strike inspired Frederique Delacoste, the head of Cleis Press, to issue a call for stories and essays documenting “women’s resistance on issues that have previously been either invisible or distorted by sexist ideology.” That book became "Sex Work: Writings by Women in the Sex Industry" (1987) and introduced the term “sex work” into public discourse.

When the former president of the Screen Actors’ Guild became president of the United States, the culture wars, the sex wars and the porn wars split the producers of commercial culture. Sex-negative political rhetoric and government policies that institutionalized “straight” family values often seemed overwhelming in the 1980s. Distrust in electoral politics eroded while conservative Republicans and “greed is good” capitalists controlled government; the confirmation of Supreme Court Justice Clarence Thomas and new restrictions on abortion, sexual privacy and sexual-harassment claims undermined the belief that the Supreme Court would uphold justice and equality. Activists turned to culture — to “meme warfare” — to restore, and even reinvent, the radicalism needed to change the system. “Critical engagement with popular culture” became “a political strategy” for attacking the status quo. The sexually repressive culture and politics of the Reagan-Bush years became an obvious target.

“Whores and strippers and butches” were the working-class activists telling sexual stories in the women’s pro-porn movement; they weren’t academics “so eloquent and rational it would have made Rousseau swoon.” The scholars and lawyers from the Feminist Anti-Censorship Taskforce (FACT) debated Catharine MacKinnon, Andrea Dworkin and the women’s studies crowd in academic journals and in court; sex workers and sex radicals made their own films, wrote their own books and published their own magazines. FACT, formed in 1984, spoke about the theory of pornography, with its focus on censorship and freedom of expression as constitutional rights. But while anti-porn activists tried to shame FACT members by calling them “pimps,” the group didn’t address the fact of sex work, with the women and men who work in the sex industry.

When former stripper and Bikini Kill singer Kathleen Hanna lipsticked SLUT on her stomach in 1992, she inspired “grrrls” around the world to “start a fucking riot.” Riot grrrls were committed to creating their own media, to control their own representations. Younger, third wave activists questioned the anti-porn, anti-sex rhetoric of mainstream feminism and women’s studies scholarship. As Lusty Lady organizer and comedienne Julia Query joked, women’s studies majors employed in the commercial sex industry were the new stereotype. The sex-positive feminism of the 1990s had pop culture appeal for ironic Gen-Xers; it could also be packaged, marketed and commercialized. In 1995, MAC cosmetics contracted RuPaul as its spokesmodel for VIVA GLAM lipstick, with “every cent of the selling price” going to the MAC AIDS Fund, monies that help the St. James Infirmary and other sex workers’ groups do harm reduction work. Sex workers also cashed in, penning autobiographies, novels and advice books, often with mainstream presses — Norma Jean Almodovar, Carol Queen, Tracy Quan, Ericka Langley, Shawna Kennedy, Lily Burana. Even the unemployed workers in Sheffield, England, did The Full Monty. The 1990s made pro-sex feminism cool.

Lipstick feminism, even VIVA GLAM, requires constant reapplication to stay bright. Women in Toronto organized the first SlutWalk in April 2011 because they were tired of slut-shaming and victim-blaming. The police, the media and everyone else needed reminding that rapists were the criminals; victims did not ask to be sexually assaulted. London organizers declared, “Rape is never, ever OK. Not if she was wearing a miniskirt. Not if she was naked. Not if she was your wife, girlfriend or friend. Not if she was a prostitute.”

Sex-positive feminists might party all night with the “sluts,” but some folks couldn’t abide the “whores” from the other side of privilege town. “A prostitute,” commented a “17 year old girl,” “will do anything for sex and ... have no standards.”

Despite the acceptance of “sluts,” the “prostitute” remains a deeply embedded symbolic marker between decency and disrespect. The “ethical slut” engages in sex of her or his own “free” will, while the “dirty whore” insists on getting paid for sex. Sex-positive feminists and other “sluts” believe there is nothing morally wrong with consensual sex between two (or more) people in private, or for adults, in a semi-public setting such as a sex club, dungeon or swingers’ retreat. But money changes everything.

Whorephobia remains pervasive in the social psyche, showing its ugliness even in sex-positive communities. The positive emphasis on sex work confuses “straights” into thinking that sex work is about sex, not work. That cognitive dissonance — the deep chasm filled with stereotypes and prejudices — interferes with the capacity of civilians to hear sex workers speak about their experiences. Stories that don’t conform to the “superhappyfunsexysexwork!” narrative tend to flummox pro-sex feminists; they can identify with privileged exotic dancers, porn performers and professional dominants (even fantasize about being one), but think “junkie whores” need to be rescued and should be prevented from working in their gentrifying neighborhoods. Such disrespectful treatment leads to silencing, ignoring, or rewriting what sex workers have to say.

Writing in the blogosphere recently, sex workers say they’re frustrated with the uncritical acceptance of sex-positive feminism. Furry Girl, the Seattle-based founder of SWAAY, is also the blogger behind Feminisnt because she “got tired of trying to shoehorn my life into a useless ideology like a pair of ill-fitting high heels.” The habit of always trying to put a “good” face on sex work leaves little room for those who have had not-so-good experiences. They fear talking about the bad stuff because “straight” audiences, whether pro-sex feminists, prohibitionists or the media, tend to stuff those stories into established morality tales about sex, violence and bodily integrity. But the truth is that by telling stories with all the gory details and delicious specifics, we can get to the revolution that sex workers are creating right now.

Excerpted from "Sex Workers Unite: A history of the movement from Stonewall to Slutwalk," by Melinda Chateauvert. Copyright © 2014. Beacon Press. All rights reserved.