The "middle class" myth: Here's why wages are really so low today

Want to understand the failures of the "free market" and the key to getting a decent wage? Here's the real story 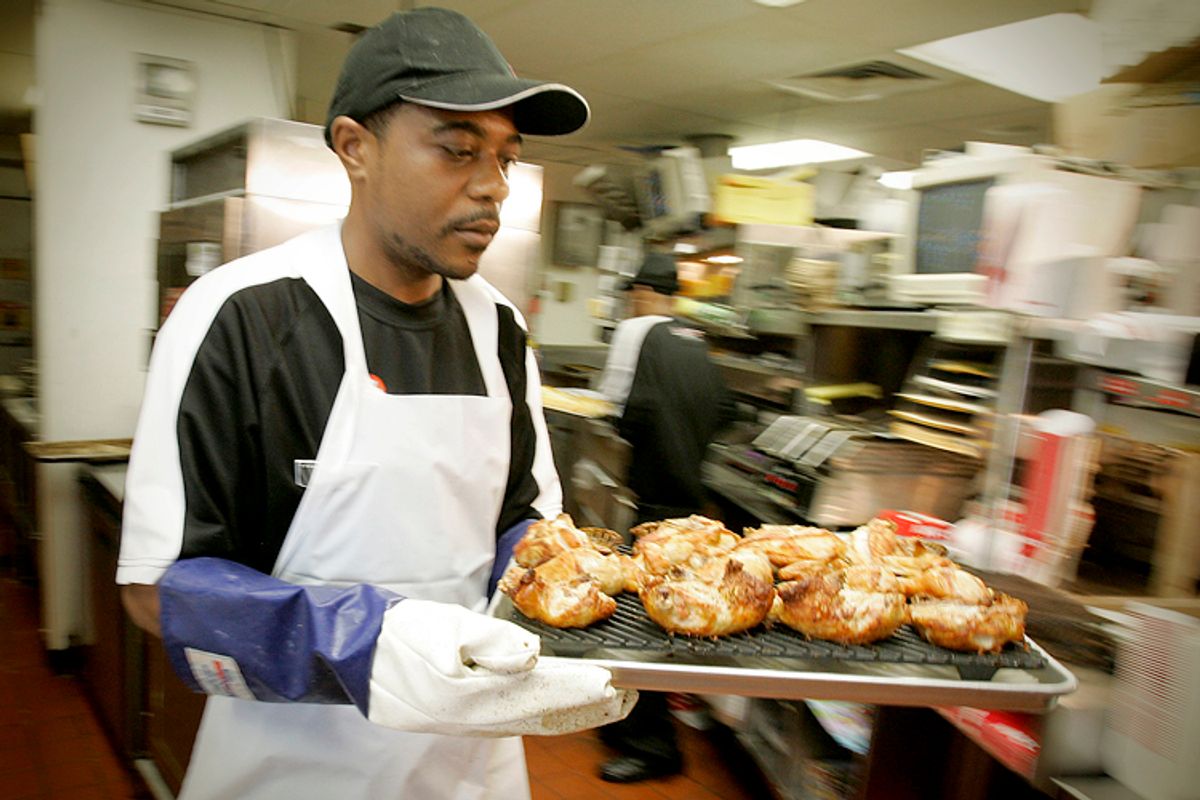 Let me tell you the story of an "unskilled" worker in America who lived better than most of today’s college graduates. In the winter of 1965, Rob Stanley graduated from Chicago Vocational High School, on the city’s Far South Side. Pay rent, his father told him, or get out of the house. So Stanley walked over to Interlake Steel, where he was immediately hired to shovel taconite into the blast furnace on the midnight shift. It was the crummiest job in the mill, mindless grunt work, but it paid $2.32 an hour — enough for an apartment and a car. That was enough for Stanley, whose main ambition was playing football with the local sandlot all-stars, the Bonivirs.

Stanley’s wages would be the equivalent of $17.17 today -- more than the “Fight For 15” movement is demanding for fast-food workers. Stanley’s job was more difficult, more dangerous and more unpleasant than working the fryer at KFC (the blast furnace could heat up to 2,000 degrees). According to the laws of the free market, though, none of that is supposed to matter. All that is supposed to matter is how many people are capable of doing your job. And anyone with two arms could shovel taconite. It required even less skill than preparing dozens of finger lickin’ good menu items, or keeping straight the orders of 10 customers waiting at the counter. Shovelers didn’t need to speak English. In the early days of the steel industry, the job was often assigned to immigrants off the boat from Poland or Bohemia.

“You’d just sort of go on automatic pilot, shoveling ore balls all night,” is how Stanley remembers the work.

Stanley’s ore-shoveling gig was also considered an entry-level position. After a year in Vietnam, he came home to Chicago and enrolled in a pipefitters’ apprenticeship program at Wisconsin Steel.

So why did Rob Stanley, an unskilled high school graduate, live so much better than someone with similar qualifications could even dream of today? Because the workers at Interlake Steel were represented by the United Steelworkers of America, who demanded a decent salary for all jobs. The workers at KFC are represented by nobody but themselves, so they have to accept a wage a few cents above what Congress has decided is criminal.

The argument given against paying a living wage in fast-food restaurants is that workers are paid according to their skills, and if the teenager cleaning the grease trap wants more money, he should get an education. Like most conservative arguments, it makes sense logically, but has little connection to economic reality. Workers are not simply paid according to their skills, they’re paid according to what they can negotiate with their employers. And in an era when only 6 percent of private-sector workers belong to a union, and when going on strike is almost certain to result in losing your job, low-skill workers have no negotiating power whatsoever.

Granted, Interlake Steel produced a much more useful, much more profitable product than KFC. Steel built the Brooklyn Bridge, the U.S. Navy and the Saturn rocket program. KFC spares people the hassle of frying chicken at home. So let’s look at how wages have declined from middle-class to minimum-wage in a single industry: meat processing.

Slaughterhouses insist they hire immigrants because the work is so unpleasant Americans won’t do it. They hired European immigrants when Upton Sinclair wrote "The Jungle," and they hire Latin American immigrants today. But it’s a canard that Americans won’t slaughter pigs, sheep and cows. How do we know this? Because immigration to the United States was more or less banned from 1925 to 1965, and millions of pigs, sheep and cows were slaughtered during those years. But they were slaughtered by American-born workers, earning middle-class wages. Mother Jones magazine explains what changed:

“[S]tarting in the early 1960s, a company called Iowa Beef Packers (IBP) began to revolutionize the industry, opening plants in rural areas far from union strongholds, recruiting immigrant workers from Mexico, introducing a new division of labor that eliminated the need for skilled butchers, and ruthlessly battling unions. By the late 1970s, meatpacking companies that wanted to compete with IBP had to adopt its business methods — or go out of business. Wages in the meatpacking industry soon fell by as much as 50 percent.”

In Nick Reding’s book "Methland," he interviews Roland Jarvis, who earned $18 an hour throwing hocks at Iowa Ham…until 1992, when the slaughterhouse was bought out by a company that broke the union, cut wages to $6.20 an hour, and eliminated all benefits. Jarvis began taking meth so he could work extra shifts, then dealing the drug to make up for his lost income.

In Rob Stanley’s native South Side, there is more than one monument to the violence that resulted when the right of industry to bargain without the interference of labor unions was backed up by government force. In 1894, President Cleveland sent 2,500 troops to break a strike at the Pullman Palace Car Factory. On Memorial Day, 1937, Chicago police killed 10 striking workers outside the Republic Steel plant. The names of those dead are cast on a brass plaque bolted to a flagpole outside a defunct steelworkers’ hall. They were as polyglot as a platoon in a World War II movie: Anderson, Causey, Francisco, Popovich, Handley, Jones, Reed, Tagliori, Tisdale, Rothmund.

I first saw those sites on a labor history tour led by “Oil Can Eddie” Sadlowski, a retired labor leader who lost a race for the presidency of the USW in 1977. Sadlowski was teaching a group of ironworkers’ apprentices about their blue-collar heritage, and invited me to ride along on the bus. Oil Can Eddie had spent his life agitating for a labor movement that transcended class boundaries. He wanted laborers to think of themselves as poets, and poets to think of themselves as laborers.

“How many Mozarts are working in steel mills?” he once asked an interviewer.

In the parking lot of the ironworkers’ hall, I noticed that most of the apprentices were driving brand-new pickup trucks -- Dodge Rams with swollen hoods and quarter panels, a young man’s first purchase with jackpot union wages. Meanwhile, I knew college graduates who earned $9.50 an hour as editorial assistants, or worked in bookstores for even less. None seemed interested in forming a union. So I asked Sadlowski why white-collar workers had never embraced the labor movement as avidly as blue-collar workers.

“The white-collar worker has kind of a Bob Cratchit attitude,” he explained. “He feels he’s a half-step below the boss. The boss says, ‘Call me Harry.’ He feels he’s made it. You go to a shoe store, they got six managers. They call everybody a manager, but they pay ’em all shit.”

The greatest victory of the anti-labor movement has not been in busting industries traditionally organized by unions. That’s unnecessary. Those jobs have disappeared as a result of automation and outsourcing to foreign countries. In the U.S., steel industry employment has declined from 521,000 in 1974 to 150,000 today.

“When I joined the company, it had 28,000 employees,” said George Ranney, a former executive at Inland Steel, an Indiana mill that was bought out by ArcelorMittal in 1998. “When I left, it had between 5,000 and 6,000. We were making the same amount of steel, 5 million tons a year, with higher quality and lower cost.”

The anti-labor movement’s greatest victory has been in preventing the unionization of the jobs that have replaced well-paying industrial work. Stanley was lucky: After Wisconsin Steel shut down in 1980, a casualty of obsolescence, he bounced through ill-paying gigs hanging sheetrock and tending bar before finally catching on as a plumber for the federal government. The public sector is the last bastion of the labor movement, with a 35.9 percent unionization rate. But I know other laid-off steelworkers who ended their working lives delivering soda pop or working as security guards.

Where would a high-school graduate go today if he were told to pay rent or get out of the house? He might go to KFC, where the average team member earns $7.62 an hour -- 57 percent less, in real dollars, than Stanley earned for shoveling taconite. (No hourly worker at KFC earns as much as Stanley did.) The reasons given for the low pay -- that fast-food work is an entry-level job that was never meant to support a family or lead to a career -- are ex post facto justifications for the reality that KFC can get away with paying low wages because it doesn’t fear unionization. It’s a lot harder to organize workers spread across dozens of franchises than it is to organize a single steel mill.

As Oil Can Eddie pointed out, a class consciousness discourages office workers from unionizing. There’s a popular discounting company in Chicago called Groupon, where the account executives -- who are all expected to have bachelors’ degrees -- earn $37,800 a year. Adjusted for modern dollars, that's about Stanley’s starting wage, without overtime. Because they’re educated and sit safely at desks, they don’t think of themselves as blue-collar mopes who need to strike for higher pay and better working conditions.

The fact that many of today’s college graduates have the same standard of living as the lowest-skilled workers of the 1960s proves that attitude is wrong, wrong, wrong. If we want to restore what we’ve traditionally thought of as the middle class, we have to stop thinking of ourselves as middle class, no matter how much we earn, or what we do to earn it. “Working class” should be defined by your relationship to your employer, not whether you perform physical labor. Unless you own the business, you’re working class.

“The smartest people I ever met were guys who ran cranes in the mill,” Oil Can Eddie once said.

They were smart enough, at least, to get their fair share of the company’s profits.