Does Scorsese's "Wolf of Wall Street" have a homophobia problem?

The new financial thriller depicts a gay man beaten and nearly killed. Is it all in good fun? 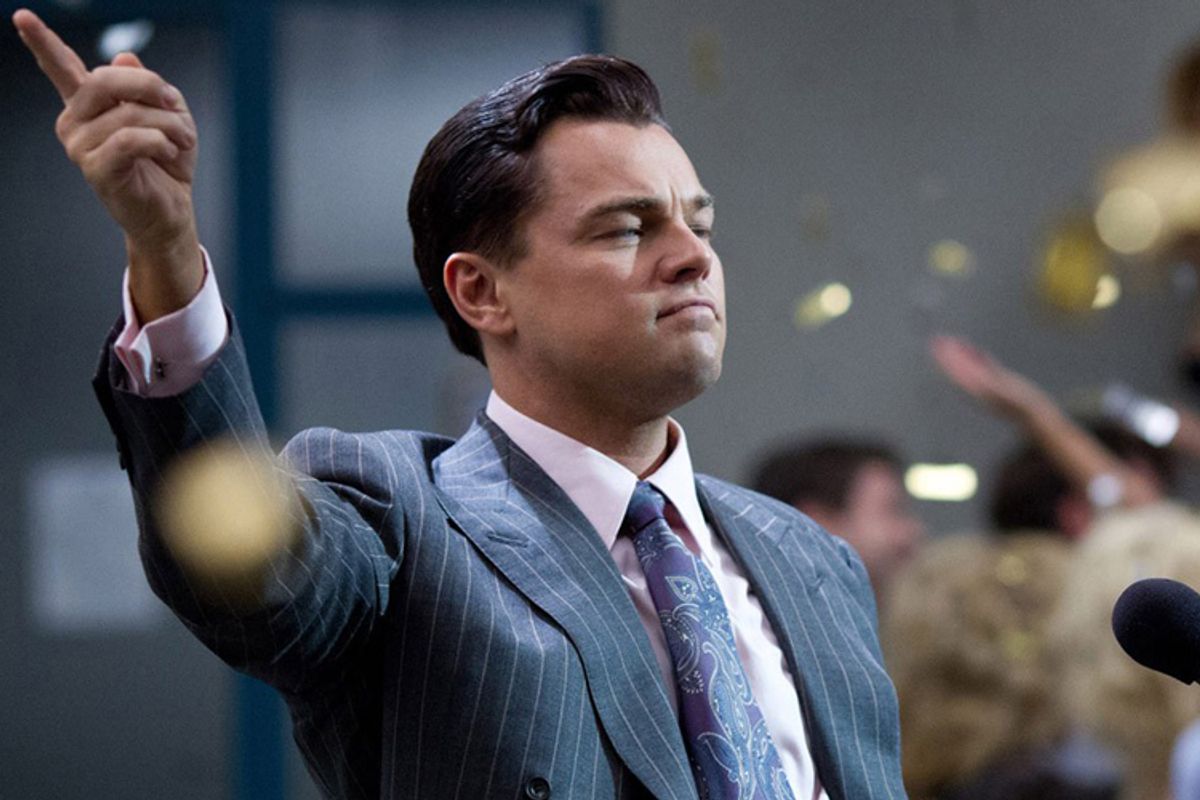 Martin Scorsese's new film "The Wolf of Wall Street" has only been out for a week, but has already been the subject of a very familiar sort of controversy. Last year, it was "Zero Dark Thirty" -- a film depicting U.S. troops committing torture in the run-up to the killing of Osama bin Laden, and perceived to endorse that same torture; this spring, it was a debate catalyzed by novelist Claire Messud over whether characters in fiction have to or ought to be "likable."

"The Wolf of Wall Street" depicts misdeeds of every stripe -- it takes its name and its plot from the memoir by boiler-room operator Jordan Belfort, who is played by Leonardo DiCaprio both as a financial manipulator and an abuser of drugs and women. L.A. Weekly ran a letter from a daughter of one of Belfort's associates condemning the film as one that simply ought not to exist, a point-of-view that would seem to make impossible much great art. The reaction to "The Wolf of Wall Street" has been generally befuddling, given the context both of Scorsese's past work and the film's subject matter. Of course the director of "Goodfellas" would direct a film that plays drug use and crime for laughs (until it doesn't). Of course a film about Wall Street would feature financial manipulation.

But if the L.A. Weekly writer brought her particular history to bear on the film, so too did I; it was hard to explain away the visceral sense that the film, in its depiction of homophobia, was itself homophobic. In one scene, Belfort's butler, a gay man, throws an orgy in Belfort's home, and is then hit in the face and dangled over the edge of a skyscraper when one of his guests steals money. In another, two associates of Belfort (played by Jonah Hill and Jon Bernthal) taunt one another as "fags" as they fight in a parking lot.

Obviously, to depict something is not necessarily to endorse it. But a film directed by, written by and starring different sets of heterosexual men treads uncomfortably when it ventures into territory about people other than heterosexual men. It is a presumption underpinning the scenes that to be called gay is a grievous offense to these characters. Other actions in the movie get reactions: When it comes to Belfort's financial misdeeds, he's told off by an FBI agent, and when it comes to his mistreatment of his wife, his wife tells him she wants a divorce. While Belfort's never punished in a satisfying manner, the movie gives characters their times to get back at Belfort in small ways. But if there's any comment on his and his cohort's homophobia, it happens entirely in the mind of the moviegoer and not on-screen; homophobia is just the natural order of things -- of course straight men are discomfited by homosexual sex.

Going into art looking for one's own opinions to be ratified is dangerous -- it leads to, say, asking why pop artists aren't explicitly mentioning the gay-marriage cause. But "The Wolf of Wall Street," which methodically builds a case against Belfort for most of his misdeeds, sort of just shrugs at his beating up a gay man, and his associates' coarse language and "Duck Dynasty"-ish horror at the idea of gay sex. The film depicts a period of time not very long ago -- but long enough ago that the open expressions of revulsion at gay people seem a bit shocking, now. But to Scorsese, at 71, perhaps they sound right.

There's something deeply didactic about "The Wolf of Wall Street," which takes it upon itself to explain to us that the folks who committed the misdeeds that led to the 2008 stock-market crash were bad people -- look how bad, look how many drugs they used, look at their wild parties! And yet other aspects pass entirely without rebuttal. A character getting beaten and mocked for his sexuality is not better or worse than tricking people into buying valueless stocks, but one of these things gets Jordan Belfort called to the carpet by the FBI and (briefly) sent to prison, and the other just happens and then is over. The film, like most Scorsese films, depicts a universe in which to be a straight man is the norm and any other manner of being is a deviation. It's not homophobic to depict that world -- but it's definitely boring.