Our Orwellian reality: Drone wars, surveillance, a lapdog media -- and you

Our government lies to itself -- and to us. Like Edward Snowden, it is time for us all to stand up for our values 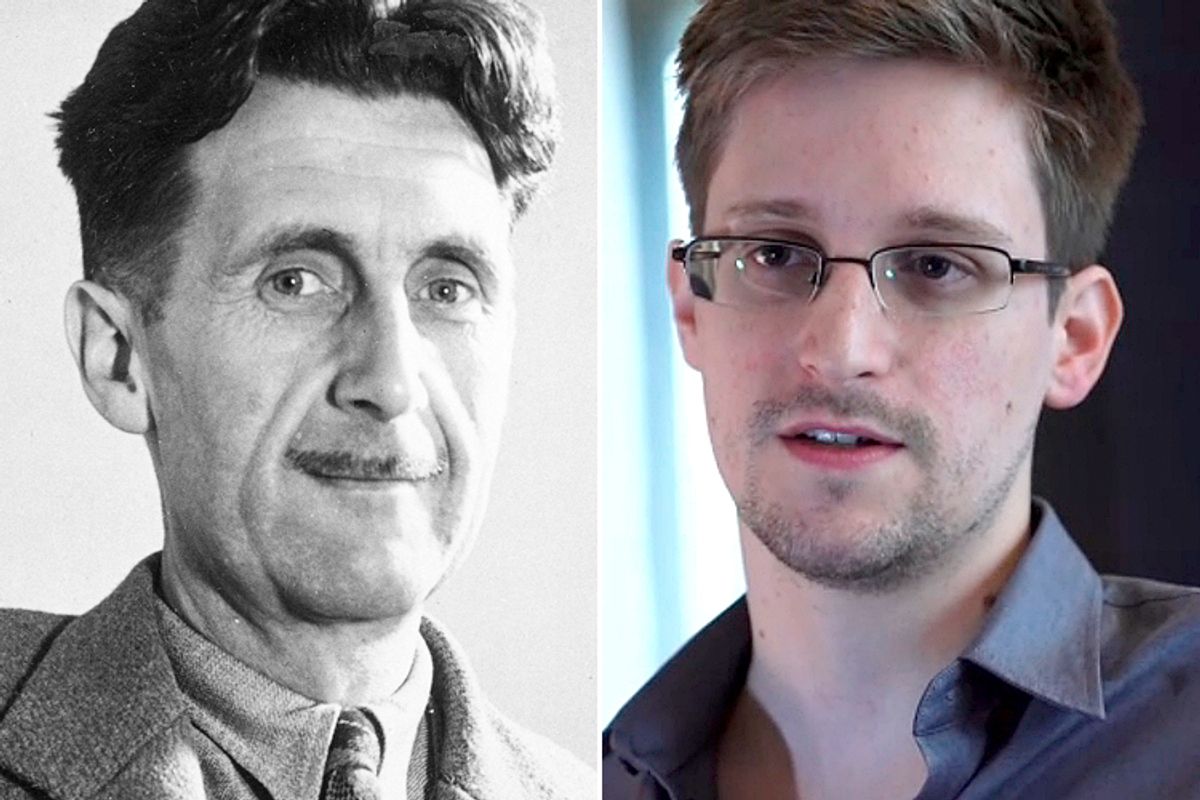 This column is not another look back, another of those tedious end-of-year rituals the very best hacks, the hacks truly committed to sheer hackery, never tire of. By the time Salon posts this piece, the low, dishonest year known as 2013 will have passed. This is a look forward, suitably enough for its date. It asks, “So what are we going to do?”

The query comes verbatim from a man named Ray McGovern. And this column is written in praise of Ray McGovern. It is an accolade, of all things, to a spook, for the simple reason he gives us a clean, honest idea of what is becoming of a nation wholly committed to fooling itself.

McGovern, who is in his early 70s now, posed his question in a speech delivered in Seattle as last year drew to a close. So you might think he had in mind yet another American-supported coup and all the murders and arrests that continue as we speak, or the reckless diplomacy that makes us praise the ineptitude of our president and his secretaries of state and defense, or the surveillance masters whose constitutional breaches we will soon — watch for it — be asked to accept as fixtures in our lives, or the drones that kill innocents more or less indiscriminately, even as they may be on their way to a wedding.

We have in McGovern a former CIA man who watched from within, close up and personal over nearly three decades, how our government systematically lies to itself by corrupting what its professional analysts tell it and then systematically lies to its citizens. McGovern’s fundamental topic is language, language deployed as lethal weapon — lethal because it takes life, if not lives. At bottom, he is into the consequences of a pervasive culture of misinformation and disinformation.

McGovern has a splendid way of articulating these consequences. American leaders claim license to act according to fantastic notions of righteousness and privilege among others. In their case, it is a question of seeing but pretending not to. In the case of most American citizens, it is a question of simply not seeing. Darkness renders people silent. This is the desired condition. We must have media, but those populating newsrooms function as the clerks of the governing classes. It is sound and fury in the cause of preserving the culture of quietism, passivity.

This is what McGovern brings to his question. It is a freighted line of inquiry, and for this reason the most worthwhile I can think of right now.

“It’s getting kind of late,” McGovern observed in Seattle. “I think that the next year or two are going to be key. So I think we need to play a role. We have to recognize our responsibility.”

The urgency is dead on. I share it, with a view that accusations of paranoia are either complacent, born of ignorance, or mal-intended. When a federal judge calls the NSA’s surveillance project and its justifications in a courtroom “almost Orwellian,” as Judge Richard Leon did two weeks ago, things are beyond stories and abstractions and clever literary allusion. It is “Orwell ‘R’ Us” now.

But it is the “do” part of McGovern’s thinking that captivated me when I heard the speech on David Barsamian’s honorable Alternative Radio as I sat up here in the New England hills. The thought of “responsibility” brings us to the rock face of our moment. We find ourselves in one of those passages in history we Americans tend to think happen only to other people. To me it begins with a choice, and claim your own cliché: on the bus, off the bus, part of the problem or the solution, and so on. And the context is such that denying the choice, or not recognizing it, comes to a choice.

McGovern co-founded and runs a couple of committees dedicated to “integrity in intelligence,” which may once have been inside baseball, the business of disenchanted professionals, but cannot be so dismissed any longer. He made news when he traveled to Russia last October to give Edward Snowden an award for — but exactly — integrity in intelligence. The real honor, as McGovern makes clear, was rendered because Snowden did — as in, he looked at his circumstances and acted according to what he judged he had to do. He chose, then, even as the whole world watched.

McGovern tells good stories, especially when illustrating the complicity of silence during interims in history such as ours. He talked about a German professor named Albrecht Haushoffer, who spoke against the Nazis, but acted a little late in the tragedy. Haushoffer was arrested but refused to sign the customary confession before the Gestapo shot him. Then they found one in his pocket: “Yes, I’m guilty, but it’s not what you’re thinking. I should have earlier recognized my duty. I should have more sharply called evil evil. I put off my judgment for too long.”

Camus was always good on this sort of stuff, and McGovern gives him a very fine rendering. Just as he took his Nobel in 1957 the French writer said, “Remaining aloof has always been possible in history. When people did not approve, they could always keep silent or talk of something else. Today even silence has dangerous implications.”

So what are we going to do? How does Ray McGovern answer his own question?

He makes three interesting points on the way to his thought on the matter. The first has to do with the prospect of success and what possible difference under the sun could anything we do make?

“We’re not supposed to worry about being successful,” is McGovern’s reply to this brand of pessimism. “We’re supposed to be what? Faithful. The good is worth doing because it is good. If we’re all worried about whether we’re going to achieve success, we ain’t gonna do nothin.’”

Second is the question of sacrifice, and here he goes back to Camus. It is worth rendering with a little length. It is again Camus in 1957:

We have nothing to lose but everything. So let’s go ahead. This is the wager of our generation…. Those individuals who refuse to give in will have to stand apart, and they must accept this. Personally, I have never wanted to stand apart. For this is a sort of solitude, which is certainly the harshest thing our era forces upon us…. But I should not want to change eras, for I know the greatness of this one. Moreover, I have always thought that the maximum danger implied the maximum hope.

In this same line, McGovern is also good on the oddly related topics of principles and necks.

“We can kind of have our principles … but if there’s nothing for which you’re willing to suffer for your principles, where your compassion would mean actually suffering with or suffering because of — like what Ed Snowden did — then your principles, they’re really nice to have, aren’t they, but there’s something lacking here.”

Then the thought on that essential body part: “I think necks are very nice. But if there’s nothing for which you will risk that neck, then it becomes your idol. And necks are not worthy of idol worship…. Whatever we need to do, we do it.”

For what, in the end? The what-are-we-going-to-do problem.

McGovern’s answer is simple and refreshingly American in the best meaning of this term. “We have to be prophetic,” he says. “We have to go back to the vision of the Founders.”

This is to say, we have to look forward and see what is coming at us, and then look backward to retrieve what people calling themselves patriots are destroying before our eyes. This is why necks and solitude and all the rest deserve our consideration now.

McGovern is a Russianist and a Europeanist, having served in the shadows in the Soviet Union and Germany, among other places. Maybe it is natural that his frame of reference includes the Nazis and the tumult in Cold War Europe.

I draw another comparison. Invoking the Nazis can come over as overblown, and may no circumstance ever arise to justify the reference. I go to 1950s America for my relevant history, and it holds. No one can say it cannot happen here, because it is before our eyes. The only way to avoid this reality any longer is to speak other than plain English.

McGovern named his speech “Whistleblowers.” In my take we can all be whistle-blowers now, and it requires no more than speaking plain English, at least as a start. It is McGovern’s plain English that deserves gratitude and gets mine.