Donald Trump has a theory about climate change, while the Pope catches flack for being too mean to rich people 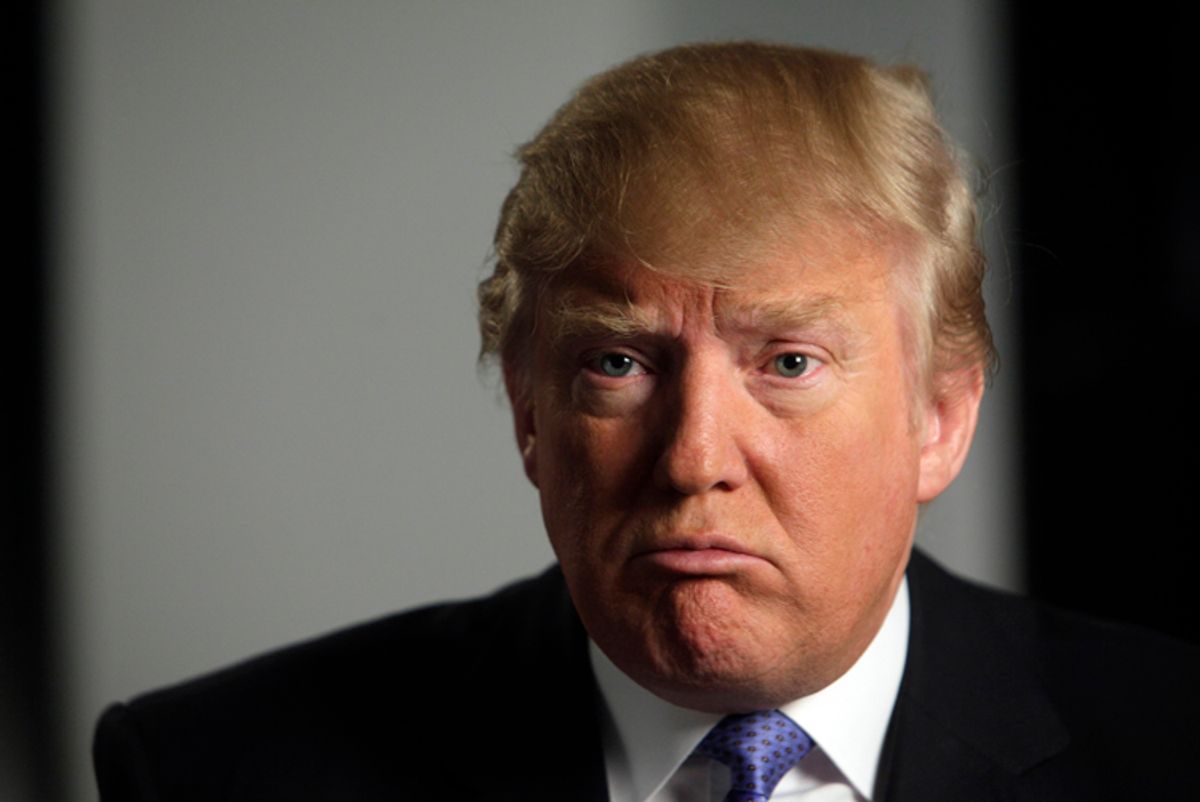 Pope Francis has been shaking a lot of conservative Christians up by de-emphasizing the church’s view of gays and atheists as sinners. But the people he is upsetting the most are super-rich so-called Christians, who apparently had no idea that this Jesus fellow was so sympathetic to the poor and downtrodden. And the Pope’s indictment of greed and the implication that trickledown economics doesn’t work, and isn’t something Jesus would condone, is just a step too far.

Them’s fighting words to billionaire Home Depot founder Ken Langone, who issued a warning to the poverty-conscious pontiff this week. In a nutshell, Langone said, shut up with your criticisms of rich capitalists or we’re not going to give any more money to charity. One of Langone’s favorite charities is the Republican Party, so no great loss there. But Langone also said “his friends” might be less inclined to give money for the restoration of St. Patrick’s Cathedral in New York if that mean old pope does not stop hurting their feelings by saying they lack compassion for the poor.

Right, the old “my friends” story. And where is people’s compassion for the rich? Meanies.

Apparently, David Brooks is a haunted man. See, way before he became a conservative columnist for the New York Times, he made an embarrassing speech in a class. The reason: that ole devil weed. He smoked it at lunch and was too stoned to function in English class.

The memory of that embarrassing episode still keeps Brooks up at night sometimes. He would very much like to help prevent other teenagers from having bad memories like that. He would also like to prevent teenagers (and others) from having the silly fun and bonding experiences he admits he had while smoking pot as a youth. Curiously, he is less concerned about preventing kids, especially and statistically, black kids, from having nightmarish, life-ruining experiences with the criminal justice system after being caught with even small amounts of pot. His main point is that although he smoked it, and kind of liked it at one point, other people shouldn’t be able to because they won’t be able to modulate their use like he was able to. And they won’t pursue higher moral pleasures, like being David Brooks.

3. Maine GOP senate candidate: The system is terribly unfair to domestic abusers, like me.

Integrity. That’s something we can all agree Washington is sorely in need of. We might however have different ideas about what constitutes integrity. For Erick Bennett, who is running in the primary against Senator Susan Collins, serving time in jail for assaulting his now ex-wife proves he has integrity.

"The fact that I have been jailed repeatedly for not agreeing to admit to something I didn’t do should speak to the fact of how much guts and integrity I have," he explained to the Bangor Daily News. “If I go to D.C., I’m going to have that same integrity in doing what I say, and saying what I do, when it comes to protecting people’s rights, as well as their pocketbooks.”

Bennett is a fighter, all right. He battled his conviction all the way until the Maine Supreme Judicial Court shut him down in 2004, denying his claim that the court treated him unfairly. He’s going as far as he can with this line of argument, saying his opponent supports the system that railroads innocent men facing domestic abuse charges.

4. Donald Trump and Stu Varney: Global cooling has been proven by the recent chilly weather.

As we all know, Donald Trump and Fox Business anchor Stu Varney are PhD climate scientists and have dedicated themselves for years to the close observation of snowfall in Central Park. Both habitual climate change deniers were considerably cheered this week by weather news they claim proves approximately 100 percent of the scientific community is wrong. Trump, whose preferred method of communicating his philosophy is Twitter, spewed: “This very expensive GLOBAL WARMING bullshit has got to stop. Our planet is freezing, record low temps, and our GW scientists are stuck in ice.”

Stu Varney similarly crowed this week that his theory of “global cooling” had been once and for all proven correct. Unable to suppress his trademark smirk, Varney said. “The ship, sent to the Antarctic to study climate change, has been stranded in the ice for 10 days. Attempts to rescue the passengers using ice breaker ships failed. Rescuers finally got through using a whopping, great big helicopter that was landing on the supposedly, very thin ice....  So, it looks to me like we are looking at global cooling. Forget this global warming. That’s just my opinion.”

We can only assume they both enjoyed the snowstorm on the East Coast this week, very, very much.

5. WSJ’s retired David Wessel: I was wrong about, well, basically, everything. Oops!

One of the Wall Street Journal’s best-known economic columnists, David Wessel, wrote his swan song column this week, in which he admitted making at least two big mistakes in his 25 years at the paper during which he was a staunch defender of unfettered American capitalism. Oops, the middle class is not actually better off; and oops, Wall Street is capable of causing a global financial crisis.

Wow! Those would seem to be pretty big mistakes for an economic columnist. Kind of important, too. Wonder how long he was keeping those under his hat.

“Looking back over that quarter-century, four surprises stand out,” his New Year’s Day columnsaid, starting with “the middle-class hasn’t done better,” a claim he had painstakingly made in books and columns. He wrote:

Where did the money go? Disproportionately to the best off, the best educated, the two-professional couples, the winners on Wall Street and in Silicon Valley. Technology and globalization favored the best-educated. The rise of finance paid some handsomely. Earnings of those at the top of almost every field rose faster than at the middle.

Two of his other big “surprises” were China’s economic explosion and the fact that the 9/11 attacks in 2001 didn’t have a “longer-lasting harmful economic effect.”

But his other big mea culpa concerned the financial market’s supposed inability to cause great economic dislocations after indulging in greed-driven bubbles. Amazingly, Wessel said he and other economists thought that would never happen.

One of few things on which most economists and policy makers agreed in 1987 was that the U.S. would never be threatened by anything resembling the Great Depression....

That was wrong. The 2007-'09 financial crisis shattered the illusion that the U.S. had a well-regulated or well-managed financial system or that it could absorb a financial hit

I wonder if Wessel’s new bosses, at the Brookings Institution where he’ll be the new director of the Hutchins Center on Fiscal and Monetary Policy, know he’s sounding practically like a socialist.

LGBT haters had a tough week, what with Robin Roberts’ coming out and being shown all that love by everybody. Then there’s the apparently unstoppable-even-in-Utah march toward marriage equality. It’s all just a little too much for Peter LaBarbera, director of Americans for the Truth (ha!) About Homosexuality. In a radio interview, he spewed all the bigoted venom he could muster, disparaging Roberts, calling transgendered people “satanic” and saying the “homosexual so-called marriage movement” is a force of “evil” designed to “corrupt children.”

His host, Vic Eliason of Voice of Christian Youth (VCY) America’s radio show on Thursday joined right in, upping the ante by calling transgender people “circus freaks” and agreeing with LaBarbera that “Satan” is working through them.

“Every coming out is a tragedy,” LaBarbera said regarding Roberts. Even Michelle Obama, he sighed, is in on the pro-homosexual agenda, which he likened to “evil empire.”

These are not nice people, and perhaps we shouldn’t be shocked. But we can’t help it — we still are.

7. William Gheen: I’m not a racist. I just think white rule is best.

Gheen is head of a rabid anti-immigrant group called Americans for Legal Immigration (ALIPAC). And he’s extremely worried that immigration reform might be on the agenda in the new year. But it hurts his feelings when people call him a racist because of his anti-immigrationist views. He is not a racist, he explained to a radio host in Idaho this week — he’s just against the people who are trying to change America’s history of being “predominently governed by people of European descendancy.” And by that, he doesn’t mean whities, although those are the people of European descent.

And it isn’t racist.

How could you even think that?

The Center for Immigration Studies is sometimes portrayed as a more sober think-tanky anti-immigration group, if such a thing exists. But it showed its true racist colors this week whensenior policy analyst Stephen Steinlight, according to Right-Wing Watch, told a Washington Times communities blogger that immigration reform would cause “the unmaking of America” because it “would subvert our political life by destroying the Republican Party” and turn the United States into a one-party state similar to Mexico under the Institutional Revolutionary Party (PRI).

Hispanics, he went on to claim, “don’t exemplify ‘strong family values’” due to “illegitimacy” rates and “anti-social behavior such as teenage child-bearing....”

Just remember, up is down, black is white. That will help you understand what these people are saying.

Some Christians fell down on the job recently, when they failed to berate critics of Phil Robertson, the “Duck Dynasty” star who has expressed his charming views on homosexuality, black people, and as it turns out, the rightful (married sex-and-kitchen-slave to older men) place of 15-year-old girls. Christians who didn’t defend Robertson, said the son of Billy Graham, who is head of his own evangelical empire, are, well, wimps.

“I appreciate the Robertson family’s strong commitment to biblical principles and their refusal to back down under intense media pressure over Phil Robertson’s comments in a recent interview,” Graham wrote in a statement this week. “As the Robertson controversy winds down—at least for now—I have been amazed at how many churches have apparently ‘ducked’ out on the issue (sin).”

Hear that, all ye sinners? And non-defenders of Saint Phil Robertson?

There have been a lot of strange doings in North Carolina’s legislatures lately, most of them bad. But when David Waddell, a conservative councilman of a town in suburban Charlotte, tendered his resignation to the town’s mayor in Klingon, absurdity reached a new kind of height (or depth).

For those unfamiliar with Klingons, they were the alien race from Star Trek who eventually made peace with the Federation (that’s the good guys). Fortunately, for non-trekkies  CNET has verified that the resignation note contained "beautiful, pointy-looking written Klingon language of Kronos."

Sadly, for residents of North Carolina, including blacks, women, teachers and children, this is far from the worst or most embarrassing thing that has happened in North Carolina politics of late.