The bridge scandal lets national media dredge up every instance of pettiness, rage and payback. There are plenty 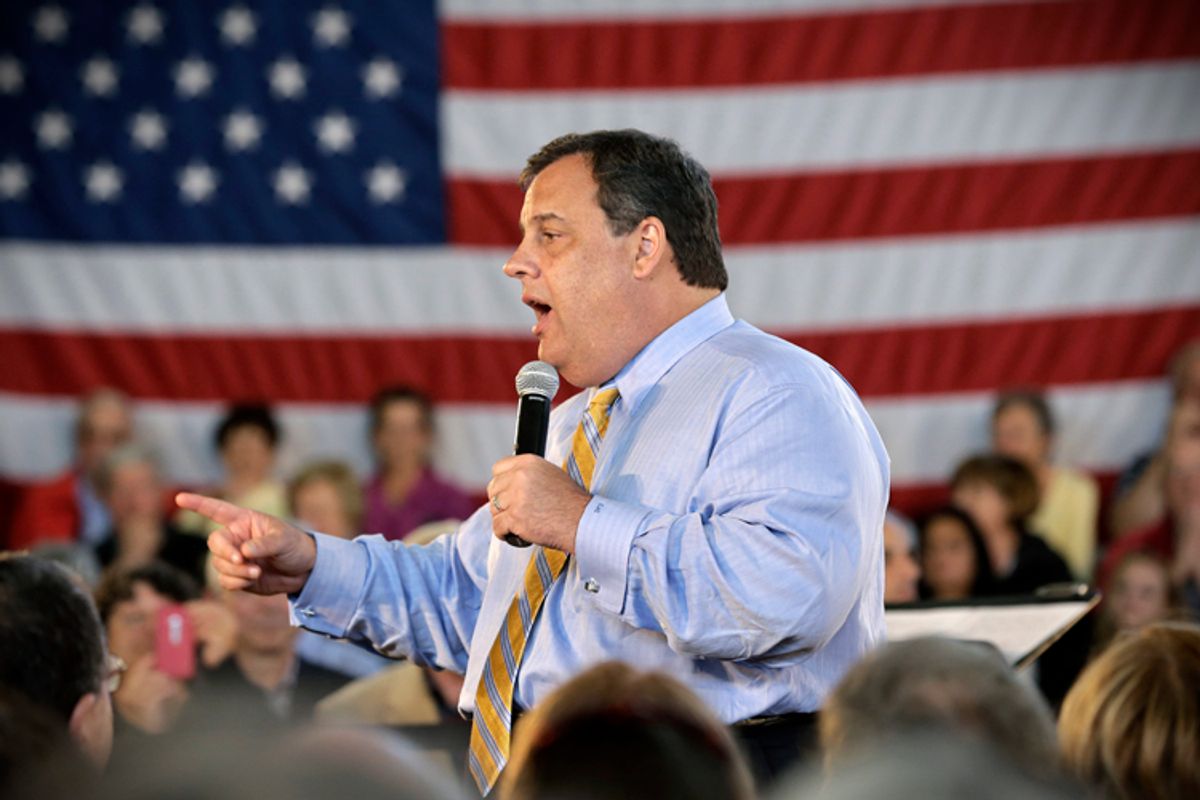 MSNBC’s Rachel Maddow floated an intriguing counter-theory Thursday night for why Gov. Chris Christie’s top aides closed four lanes to the George Washington Bridge to strangle Fort Lee in traffic in September 2013. She had to go back to August 2013, when Christie exploded in a paroxysm of pettiness in an ongoing clash with state Senate Democrats about his Supreme Court picks. In one of his trademark press tantrums, he refused to reappoint a Republican judge because she would face tough sledding in the Senate, snarling at Senate Democrats, led by Fort Lee Sen. Loretta Weinberg, as “animals.”

That was the evening of Aug. 12. The morning of Aug. 13, Bridget Anne Kelly sent the eight-word torpedo that would take out Fort Lee’s main artery to the bridge (and her career): “Time for some traffic problems in Fort Lee.” Bridge official and Christie ally David Wildstein answered “Got it,” as though the concept of “traffic problems in Fort Lee” were as familiar to him as the need for more snow plows or EZPass lanes. Maddow suggested that the real trigger for the punishment was not Fort Lee Mayor Mark Sokolich’s failure to endorse Christie’s reelection, but the Fort Lee state senator’s ongoing feud with Christie, which had exploded the night before. He once told reporters to “take a bat” to the 78-year-old grandmother (figuratively, of course), and the Supreme Court battle sent Christie to a new level of rage.

Maddow’s theory is fascinating, though it isn’t airtight. There’s no mention of Weinberg in the 22 pages of email released -- although hundreds more remain to be examined -- and it doesn’t explain why Kelly, Wildstein and Christie campaign manager Bill Stepian were so focused on insults to Sokolich, slurred as “the little Serbian” and “an idiot” in their correspondence. Still, it ought to send reporters down a new trail, if they weren’t there already.

Watching it in real time Thursday night, I was struck by the story behind Maddow’s story: the ugly tale of Christie’s state Supreme Court bullying, which began when he refused to reappoint the court’s only African-American judge, John Wallace Jr., the first time any governor had used that power in the 63 years since it was established. It made clear to me the radioactive toxicity of the bridge scandal for Christie, even if no evidence emerges to tie him directly to the Fort Lee revenge plot: It forces local and national reporters to revisit every instance of Christie’s pettiness, wrath and payback. And there are many.

The epic Supreme Court battle alone puts the lie to the national narrative that Christie is a guy who knows how to work across the aisle. Of course, the best evidence for that was his welcome of President Obama to New Jersey in the wake of Hurricane Sandy, but that’s some pretty weak tea: Christie’s not so insane as to spurn the man who came carrying billions in federal aid, as well as the ability to fast-track help.

The mainstream media, and even some Democrats, are so hungry for examples of Republicans who aren’t Tea Party lunatics or Second Amendment absolutists or Tenth Amendment dead-enders or, worse, birthers and outright racists, that they needed Chris Christie to be that guy, the kind of reasonable, bipartisan, problem-solving Northeastern Republican that used to make American politics work.

Christie proudly admitted Thursday that courting Democratic officeholders and winning their endorsement was part of his plan to “run up the score” and win a resounding bipartisan mandate in his race against Barbara Buono. He clearly planned to ride that reputation for crossing party lines and getting things done into the White House in 2016.

And, to be fair, there are shades of that guy, like the Christie who just backed in-state college tuition for some undocumented high school graduates. But most of the time, Christie is a teacher-shaming, Planned Parenthood defunding, crony-hiring, Koch brother-admiring right-winger. He is also a bully, despite claiming otherwise at his two-hour pity party.

Now, with reporters combing over every detail that could explain why the governor’s top aides rained vengeance down on Fort Lee, they will, like Maddow, encounter many stories that deserve a full airing. In the best-case scenario for Christie, in which nothing comes out to show he either ordered Fort Lee’s four-day traffic plague or knew about it, he will still endure national exposure as a fiercely partisan bestower of patronage and punishment. It will scare off some donors and, maybe more important, embolden rivals for the GOP establishment’s blessing – Wisconsin Gov. Scott Walker, or Ohio's John Kasich, or even Jeb Bush – to enter the ring.

Although I’m on record saying a year ago that Christie would never be president, precisely because of his vengeful and bullying temperament, I actually did see a route for him to win a GOP primary, which many people dismiss. It was the same route Mitt Romney took: being the guy with the money who let the Tea Party crazies knock each other off. Romney was never the front-runner in polls, but as each rival took his or her turn in the lead (yes, Michele Bachmann was taken seriously after the Ames, Iowa, straw poll), and even won a primary here or there, Romney steadily racked up delegates and cash and wound up the last man standing, despite the loathing of the far-right base.

Christie might have done the same thing, if Sens. Ted Cruz and Rand Paul and Marco Rubio all jumped in, alongside Rick Perry and maybe for some real fun, Iowa’s Steve King. But if Christie, like the Tea Partyers, has to endure a mini-primary to win the Establishment and big donor crown, he would be in big trouble.

Now he’s in big trouble already, and you can bet GOP operatives are combing the record along with Rachel Maddow’s staff and dozens if not hundreds of local and national reporters, to tell the story of the real Chris Christie. That’s in addition to the state and federal investigators who will be looking for evidence that Christie knew more about the Fort Lee plot than he’s shared. Christie will be spending more time with lawyers than with GOP donors in the months to come, and he may have to focus on keeping his job rather than winning the White House. His path to the White House is all but closed, even if some national pundits can’t bear to admit it yet.