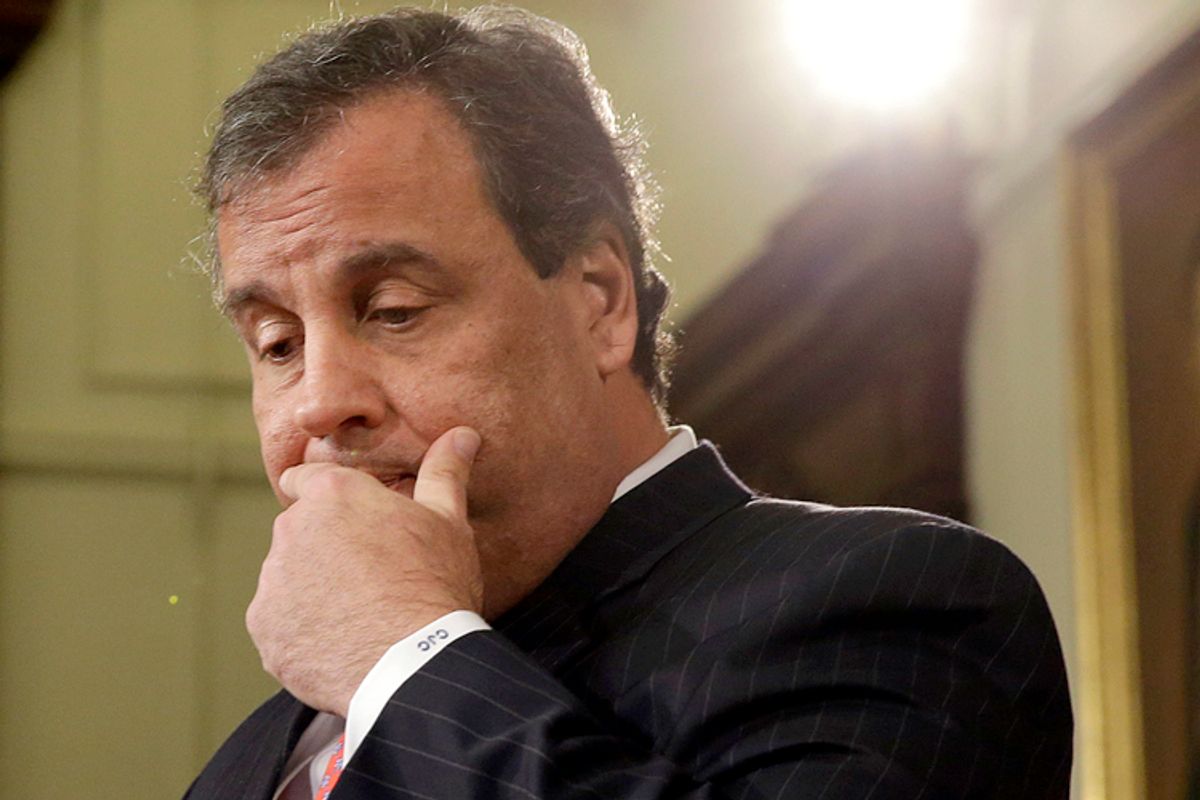 “I am embarrassed and humiliated by the conduct of some of the people on my team,” New Jersey Governor Chris Christie said during his press conference on Jan. 9 regarding the George Washington Bridge scandal. “I am who I am, but I am not a bully.” While he worked hard in the nearly two-hour press conference to dispel any rumors of his involvement, many have already noted that Christie’s speech was more remarkable for the questions it didn’t answer than for the ones it did.

Left looming is: How could a man like Christie not know that his deputy chief of staff ordered lane closures on the George Washington Bridge? And how does a former U.S. Attorney, with his eye on a 2016 presidential campaign, not ask follow-up questions when told the closures were a result of a traffic test?

Most people feel it’s relatively easy to spot a liar, and judging by the media coverage on this scandal, many people feel that Christie is lying, but without a smoking gun, i.e. damning emails or personal testimony from his staff or the Port Authority, it's hard to prove.

But his press conference itself may offer some insights. In "Liespotting: Proven Techniques to Detect Deception," author Pamela Meyer asserts that only when we step back from someone’s words to view the whole picture can we begin to see the combination of indicators that will help us successfully identify a liar. She writes:

After listening closely to the details of someone’s speech, take a mental step back to consider what the combination of his facial expressions, body language, and verbal clues says about his attitude toward being questioned. Attitude is a crucial indicator.

Is the subject interested in helping you solve a problem or answer a question? Is he forthright or evasive? How confidently does he speak? A deceptive person might be guarded and hesitant to firmly acknowledge or deny anything you suggest about his actions or behavior. A truthful person will cooperate from the start and will signal that he is on your side.

But what if that person is an expert at identifying liars? And what if that person knows how to look like he’s telling the truth? As a former lawyer, Christie would be a master at it. In his speech he went out of his way to make the listener feel he was just as surprised as anyone and that he was going to do everything in his power to get to the bottom of the lane closures. But closer examination of what he said and what he didn't say offers a very different picture.

While liespotting isn’t an exact science, and there are always exceptions, knowing how to identify certain telltale behaviors can provide some very interesting clues. Below, five mistakes Christie made in his press conference that may be signs of less-than-truthful behavior.

1. Too much detail regarding unimportant issues. According to Meyer, a subject will often offer specific details that have nothing to do with the question of his guilt as a way of validating his claim of innocence. It’s as if the specificity will add credibility to what he’s about to tell you. However, when you listen closely, you’ll observe that the abundance of details does not lead to relevant information.

When explaining how he learned of the breach in his office regarding the bridge lane closures, Christie said that he finished his workout at 8:50 and received a call from his director of communication at 8:55. Then he said, “I found this out at 8:50 yesterday morning. By 9:00 this morning, Bridget Kelly was fired. By 7:00 yesterday evening, Bill Stepien was asked to leave my organization.”

This may sound credible, but it begs the follow-up question, where’s the inquiry? Why fire your deputy chief of staff without talking to her further to find out who else might have been involved and what her motive might have been. As a former attorney, Christie knows that establishing motive is critical to securing a conviction of guilt, and if she’s the linchpin, why isn’t he speaking to her to find the others involved? Instead, when asked why Kelly lied to him, he said, “I have not had any conversation with Bridget Kelly since the email came out. And so she was not given the opportunity to explain to me why she lied because it was so obvious that she had. And I’m, quite frankly, not interested in the explanation at the moment.”

Notably, Christie indicated nine separate times throughout the conference that he was interviewing his staff and would continue to interview them. He details conversations with people he said are not involved. But why spend so much time talking to innocent people? If you want to find the guilty, talk to those you know are guilty. At one point, he said,

And so now, having been proven wrong, of course we’ll work cooperatively with the investigations. And you know, I’m going through an examination, as I mentioned to you, right now. That’s what I’m doing. I’m going through an examination and talking to the individual people who work for me, not only to discover if there’s any other information we need find, but also to ask them: How did this happen? How did, you know, how did this, you know, occur to us?

Here again, he’s giving the appearance of being cooperative by offering details, but those details lead to no real information except to tell us how serious he is about interviewing. In fact, though the conference lasted almost two hours, Christie said very little.

2. Evading questions. During the question-and-answer period Christie stuck to his talking points: Apologize. Appear cooperative. Promise to do better next time. He also avoided answering this question from a reporter: "So, I'm just asking, what do you ask yourself about -- they either thought this is what the boss wanted, or they, as a group, they were willing to go rogue and do this and then try to cover it up." Christie's response:

And what does it make me ask about me? It makes me ask about me what did I do wrong to have these folks think it was OK to lie to me? And there's a lot of soul-searching that goes around with this. You know, when you're a leader of an organization -- and I've had this happen to me before, where I've had folks not tell me the truth about something, not since I've been governor but in previous leadership positions -- you always wonder about what you could do differently. And believe me, John, I haven't had a lot of sleep the last two nights, and I've been doing a lot of soul-searching. I'm sick over this. I've worked for the last 12 years in public life developing a reputation for honesty and directness and blunt talk, one that I think is well-deserved. But, you know, when something like this happens, it's appropriate for you to question yourself, and certainly I am. And I am soul-searching on this… And so I don't want to overreact to that in that way either, John. But if you're asking me over the last 48 hours or last 36 hours I've done some soul-searching, you bet I have.

He used a lot of words to say little beyond, “I’m sorry.” It’s not an answer, it’s an accusation. He’s saying, “I’m contrite. Isn’t it enough? Can’t you see I’m really hurting?” We’re to feel sorry for him and even guilty for suspecting him.

It’s also important to note that he repeats the question in full twice -- once as if to clarify and again as part of his answer. Meyer warns that that kind of repetition indicates someone is about to lie. It’s natural to repeat a question in part, to make sure you hear it, but beware when someone repeats your question in full as part of their answer. This could be a subject’s way of buying time while he considers what he’s going to say next.

3. Lack of genuine emotion. Christie is a force of nature. He is breathtakingly self-confident and passionate about what he believes in. He’s expressive with his hands, his face and his body. A Google image search reveals Christie using his hands in almost every speech, hugging people and laughing heartily. Christie is not a stuffed shirt. His baseline behavior is that of a warm, sincere, powerful leader, quick to anger, but also quick to love.

But in Thursday’s speech, Christie kept his arms on the podium, his face expressionless and his words measured, despite the fact that he kept repeating how heartbroken he was. “I don't think I've gotten to the angry stage yet, but I'm sure I'll get there,” he said, as if he knew it was strange not to appear angry.

The fact that this behavior is so out of character for him is significant. In "Liespotting," Meyer advises, “…you’ll want to take into account the subject’s baseline speaking habits before rushing to assume he’s fabricating a lie.” In Thursday’s speech Christie’s body was frozen, his movements robotic, and he lacked all of his customary warmth and charm. While this is not a guarantee of guilt, in the context of the inherent problems with his defense, it’s disquieting.

4. Leaks. These can be the most damning of all. A leak is a facial expression or physical gesture that sneaks out without the liar’s knowledge. These telltale signs can be facial expressions or physical gestures that are out of sync. For example, a subject angry at an accusation slams his fist on the table, but his face betrays the slightest smile for just an instant. A leak could also be an errant phrase tacked on to the end of a statement that then changes its entire meaning.  “I don’t micromanage first,” Christie said at the end of an explanation regarding his management style:

I am -- there's this -- there's this, you know, kind of reputation out there of me being a micromanager. I'm not. I mean, I think if you talk to my staff, what they would tell you is that I delegate enormous authority to my staff and enormous authority to my Cabinet. And I tell them, come to me with the policy decisions that need to be made, with some high-level personnel decisions that need to be made. But I do not manage in that kind of micro way, first.

Later he assures the press corps that he will always tell them the truth, as he sees it.  It’s the “as I see it,” that weakens the phrase. But the fact that he feels the need to say it at all is somewhat suspect. According to Meyer, if anyone is telling you they are telling you the truth, that person probably is not.

Then, when asked how he might respond to a subpoena, Christie quickly dismissed the question by saying, “I’m not going to speculate on that at this time.” A strange way to answer given how many times he previously claimed he would do everything to cooperate.

Once again, none of this proves Christie is lying. But if Meyer's book is any guide, it's at least time to ask him some more questions.

Amy Punt is a Los Angeles based writer of fiction and screenplays, and a graduate-level screenwriting instructor.