The notoriously car-centric metropolis is reinventing its smoggy identity 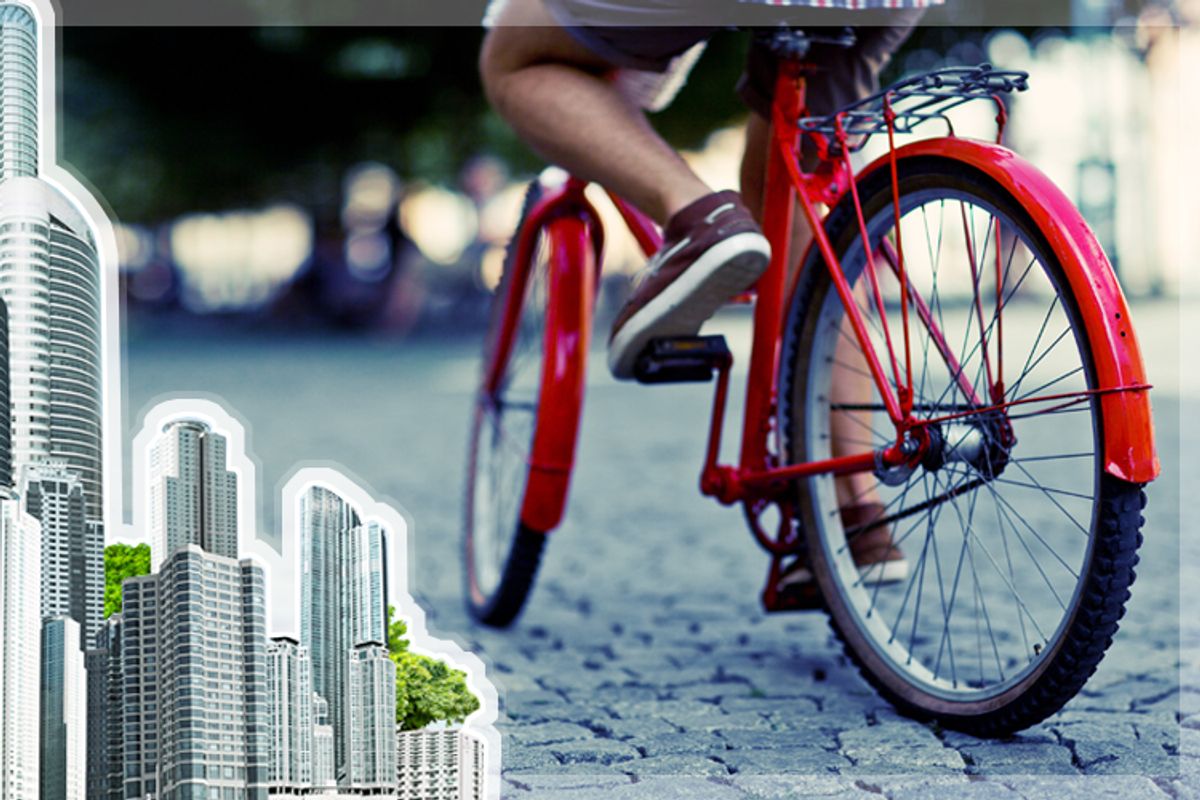 Los Angeles, like the maligned experiment of a famous artist, attracts its self-appointed champions. The world may scoff, but there’s always a contrarian to love what’s loathed, a “chic debunker of current anti-L.A. mythology,” as Peter Plagens once labeled the English architecture critic Reyner Banham. In 1971, Banham wrote a book lauding the democratic virtues of Angeleno urbanism; the next year he produced the charming BBC documentary “Reyner Banham Loves Los Angeles.” Joan Didion, another enamored arrival, famously savored the city’s freeways. In this month’s GQ, Brett Martin mounts a defense of Downtown L.A., of "Blade Runner" fame, which he calls “a Great City in the heart of the City That Destroyed Cities.”

Here’s another piece of Los Angeles mythology that can be laid to rest: The city is not just for cars.

It’s not quite the pristine, skyscraping Los Angeles of "Her" -- whose protagonist never enters an automobile -- but it is equally far from the sticky stereotype of the Missing Persons lyric, “Nobody walks in L.A.” In fact, if that song, “Walking in L.A.,” maintains a curious cultural relevance here, it is precisely as a foil for planners, journalists and politicians defending the city’s peripatetic appeal. “Don’t listen to the Missing Persons,” Mayor Garcetti said in October. “People do walk in L.A.!”

Indeed, the city is in the midst of a renaissance of walking, biking and public space. Since 2010, eight CicLAvia events have shut down miles of road for cyclists, walkers and joggers — the latest drawing over 100,000 people. Two weeks ago, the city drew 25,000 revelers to its inaugural New Year’s Eve gathering in newly created Grand Park. WalkScore gives L.A. a higher rating than Portland, Pittsburgh and New Orleans. And sometime over the course of the next month, Garcetti will announce the candidates for his “Great Streets” program, intended to remodel dozens of L.A.’s thoroughfares as pedestrian destinations.

Before I could even begin to debunk the myth of auto-centric Los Angeles, however, L.A.’s own complete streets advocates  — aware of the conventions of the genre — gave me a preliminary debunking. “There’s this recycled myth that L.A. was built around the car, and pretty much everyone who ever writes anything starts with that,” explained Malcolm Carson, the policy director for environmental health at Community Health Councils, a local nonprofit. “Empirically, it’s just not true. The vast majority was built around streetcar lines, the most extensive rail system in the world.”

Supporters of redesigned streets tend to recount this history, which offers a window on their mission in Los Angeles. “This vision of L.A. as the freeway capital of the world is only a small piece of what L.A. really represents,” says Manal Aboelata, a managing director at Prevention Institute, which has pushed for more walkable communities in the city’s poorer neighborhoods. “It has great bones. It has fantastic neighborhoods, many of them built at a time when designing was really for walkability.”

In their view, building the freeways was the great experiment, the imported philosophy, the reshaping. And it never really worked. Traffic and air pollution pushed the city to reorganize its transportation future around a heavy rail system, which opened in 1990 and continues to expand. Banham had a bon mot for his assimilation — “Like earlier generations of English intellectuals who taught themselves Italian in order to read Dante in the original,” he wrote, “I learned to drive in order to read Los Angeles in the original” — but his premise was flawed. An older city was there. “We’re trying to unearth that original blueprint,” Carson says.

This has been true in parts of Central Los Angeles for some time, but the movement has certainly picked up steam since Murphy started L.A. Walks in 1998, which she attributes to the influence of a new generation of Angelenos. “Younger people have decided not to own cars, take public transit, and be generally part of the solution rather than the problem. My generation had those ideals. But they weren’t necessarily committed.”

The level of collaboration between organizations has helped. Bike lanes and sidewalk furniture may strike observers as a stage set for gentrification, and Garcetti’s own goals – “places to eat, places to shop, places to downward dog” – would surely have caused an uproar in, say, Washington, D.C., But in Los Angeles, the communities of color in South and East L.A. have some of the lowest rates of car ownership in the city, and some of the fiercest advocates for street improvements. The city’s most famous instance of street reclamation, Ron Finley’s guerrilla gardening project, took place in South Central L.A. and has since spread to Beverly Hills. The call for better street design transcends longtime civic boundaries.

The data is there too. The 2009 National Household Travel Survey found that nearly 20 percent of all trips made in L.A. County were made on foot (17.6 percent) or bicycle (1.4 percent). Thirty-four percent of L.A. County students walk or bike to school. Bike commuting increased in the city of L.A. by 63 percent between 2000 and 2012, according to the American Community Survey, and the city has a higher share of bicycle commuters than New York.

There’s still a lot of work to do. The city’s shambolic sidewalks have not been included in a $3 billion street repair bond that may be on the ballot this November. One-third of fatal car crashes in Los Angeles involve a pedestrian. Less than 1 percent of transportation funding goes to pedestrian and bicycle improvements. The LAPD continues to make it a priority to cite jaywalkers (31,000 tickets issued last year), whose fines can range from $190 to $250 — more than a speeding ticket.

But the new mayor, at least, seems to have understood the zeitgeist. Announcing the “Great Streets” program last fall, which is expected to improve as many as 40 corridors across this sprawling city, Garcetti waxed poetic on the virtues of public space, citing Aristotle and Charles Dickens. He reprised an old refrain, popular among city planners, that the city’s neighborhoods are underserved by its chasmal commercial boulevards.

With sidewalks sliced by driveways, low-rise buildings set behind parking lots, and cars roaring by from freeway off-ramps, these corridors represent both the pitfalls and the potential of L.A.’s urban design. “In theory they should tie everything together,” Carson observed. “In actuality, they divide everything up. They’re not really places people want to spend a lot of time.” Urban designers have been pushing to redesign them for decades.

A good barometer of the mood in Los Angeles is the status of MyFigueroa, a street redevelopment of nearly four miles between Downtown and South L.A. This singularly ambitious project, begun under Antonio Villaraigosa’s watch, will bring the city its first protected bike lane, a transit-only lane, public art, expanded sidewalks and landscaping improvements. It’s a perfect example of the type of urbanism — Curbed calls it a “multi-modal wonderland” — that Garcetti would like to expand to other L.A. thoroughfares.

But it’s also a cautionary tale. A section of road planned for a protected bike lane has since reverted to automobile traffic. The current proposal has been held up by a handwritten complaint from (surprise!) a collection of local car dealerships and skepticism from a newly elected City Council member, and may now require an extension on its funding agreement with the state.

In short, it is a symbol of how difficult it can be to change long-established patterns in public infrastructure. Car traffic, as one L.A. cyclist put it, is still the “third rail” of city politics. Pedestrian improvements don’t generate the same ferocious support. The constituency of L.A. Walks is so broad, so obvious, that it is only now finding its political footing.

“It’s so universal, no one thinks they have to care about it,” Murphy says. “You’re human, so you’re a pedestrian. We’re all pedestrians.”