What your favorite TV show can learn from "Breaking Bad"

Vince Gilligan understood what few Globe-nominated producers do: Series must be conceived with an ending in mind 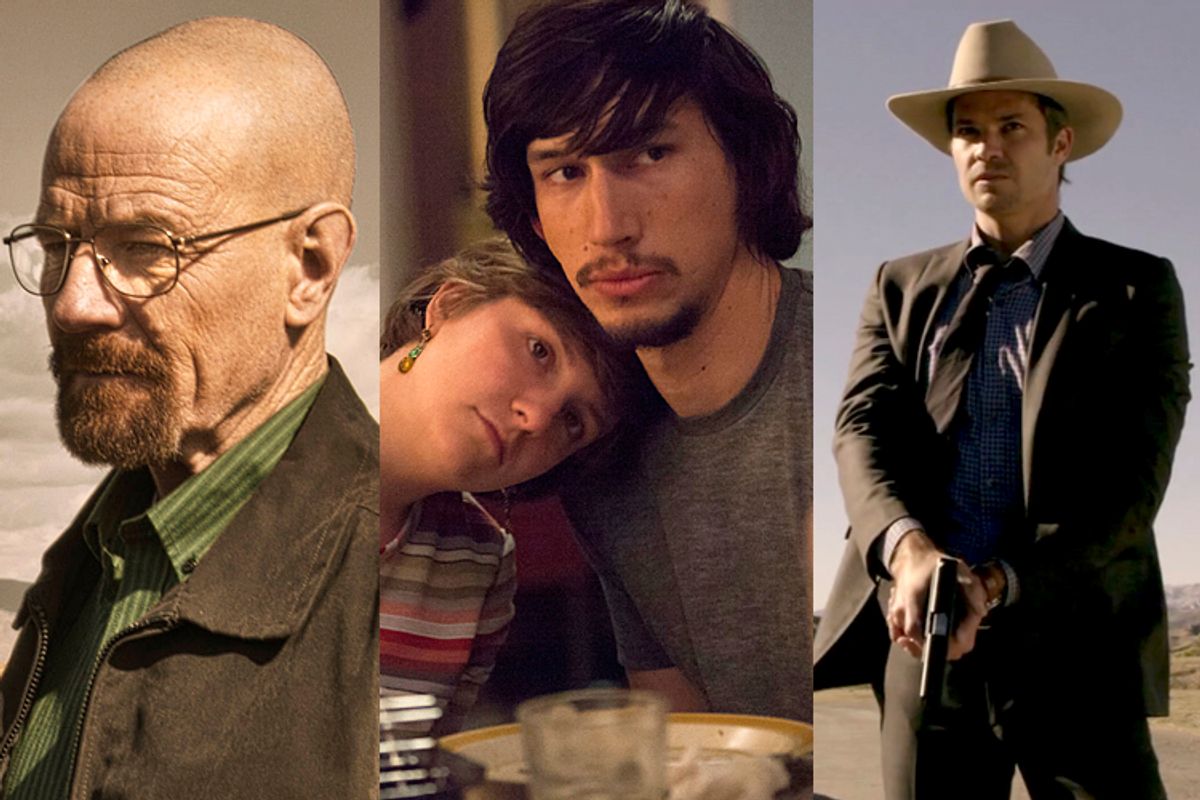 Speaking recently at a screening party held for the season premiere of Justified, FX president Nick Grad said that “the plan right now” is to end the show after its sixth season, in 2015. He added, “We like having shows that rate really well, and there’s an instinct that you want it to go on forever. But it doesn’t. … Going out at the right time is going to make your show last forever — we want to make shows that stand the test of time.” Although the original Variety story pointed out that the show might run a little longer than that “given the needs of the creatives,” there’s no reason not to take Grad at his word. He’s laying the groundwork pretty early for Justified to end after six seasons and close to 80 episodes. In a lot of ways, this is indeed “the smart move and the brave move,” since it allows for a graceful exit. But it’s more than that: Every show should probably end sooner than you think it should.

The business model of American network TV is based on longevity. Studios and networks want to create and air series that will run for years, in part because longer-running shows are theoretically more popular, and more popular shows can charge more for commercial airtime, so you can get more bang for your production dollar over a show’s run. Heat doesn’t always correspond to a show’s age, of course, but there’s often a peak time in a popular show’s life cycle when it can command certain ad rates. For instance, if you want to place a 30-second spot in Law & Order: SVU (which has been on for 15 seasons), you’ll need $73,000 and change, but if you want a 30-second spot in The Voice (a decade younger and a much bigger ratings draw), you’ll need almost $279,000. This stuff obviously fluctuates all the time, and the point of the annual TV network upfronts is to help establish these ad rates. It’s a cruel and hilariously fickle business, which is why people at the executive level are looking for the surest bet on something that’ll play for years, bring in good ad money, and be subsequently sold into syndication.

That’s the business side, though. The artistic side has nothing to do with longevity and everything to do with how much time should really be spent on a given story, or in a given narrative world. And the truth is that that amount of time is shorter than we tell ourselves it should be. Much shorter.

Grad’s comments make perfect sense here: “If you’re making a great, 80-hour movie, it has to have a beginning, middle, and end.” The heavily serialized dramas and comedies that have come to dominate network and cable TV in the past 15 years are designed with such arcs in mind. The reason that series like Breaking Bad have earned such praise is that they’ve never lost that momentum or forgotten that all stories must, by definition, end. Breaking Bad creator Vince Gilligan didn’t know how the show would end when he started it, but he knew that it would come to a close. It would have to. Another drama that’s rightly hailed as a modern classic, The Wire, included such arcs within each season, so that while the entire five-season run tells the whole story, the show itself could have stood tall had it ended earlier. (And it almost did: there was a two-year gap between the third and fourth seasons, meaning we almost missed out on one of the best seasons of television ever produced.) ABC’s Lost painted itself into more than a few narrative corners over the course of six seasons, but unanswered mysteries are preferable to the dead-eyed, wheel-spinning confusion of the show’s second season, when it was reeling from its status as a pop culture hit and had no idea where to go with its story. When the producers set a deal to end the show after six seasons, giving them a clear deadline and exit date, stories got much tighter and more focused. Battlestar Galatica, which started life as a soapy sci-fi adventure packed with political and spiritual allegories, ended in a sputtering heap that seemed to undo years of story at random. Etc., etc. And comedies aren’t excluded from such considerations, either: among others, Parks and Recreation relies heavily on serialized stories, and its age is starting to show in some awkward ways as it crosses the 100-episode mark.

But it’s not just serialized shows that benefit from definite ends. Episodic series are just as likely to burn out after a few years, their creative juices spent. Modern Family, another show that’s now surpassed 100 episodes, still has some wit but isn’t near the show it used to be. New Girl, freed from the will-they-won’t-they romance of its second year, is heading a little unsteadily into new adventures, and I’d much rather see it go after a few strong seasons than have it turn into a spastic parody of itself. That’s just current series, too. Think of the great episodic shows of the recent past, many of them comedies, that would’ve been better served had they ended sooner. Friends ran for 10 seasons but could’ve ended after six; The Office ran for nine seasons but might have better had it stopped after seven (when star Steve Carell wanted to leave) or earlier. There’s nothing wrong with running out of steam, either. No show can last forever, and no episodic premise, however rich, can provide an infinite number of story engines. It’s natural to come to the emotional end of something, which makes it all the more unnatural for a show to soldier on past that endpoint to satisfy the needs of a studio or network.

It’s not just the networks, though. It’s us. They want the show to keep going so they can keep making money from it, but we want it to keep going because, often, we don’t know when to let go. It’s an understandable urge. When you find a new favorite show, it’s almost intoxicating to imagine the number of hours you’ll get to spend in that world, watching those characters work or fight or love or grow. It can almost feel like there’s no such thing as too much, that there could never be enough episodes to satisfy our need. But there’s always such a tipping point, and it’s usually right before we’re ready to see it. Maybe the first step in helping these shows end on time is letting them. If we walk away, maybe they’ll be free to end on their own terms. I’m glad Justified is being shepherded toward a conclusion. I want it to leave me wanting more, not wishing I’d had less.