Compartmentalizing Woody Allen: What America chooses not to see 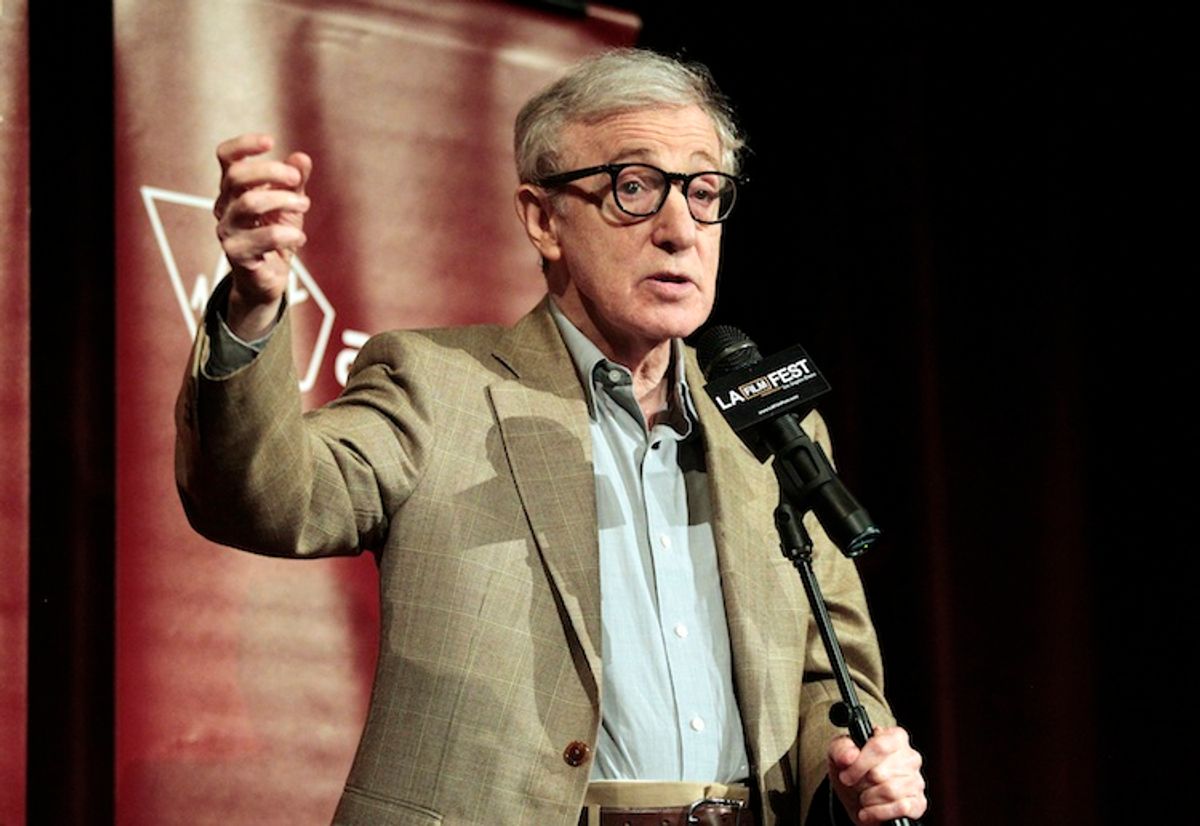 I have long been ambivalent about Woody Allen. Given his oeuvre, I’m supposed to recognize his talent as a filmmaker. Given how revered Allen is in certain circles, I’ve tried to recognize this talent. I’ve tried to believe we can simply work under the delusion that there are two Woody Allens—the brilliant filmmaker and the sexual predator who married his ex-partner’s daughter and has been accused of sexually abusing his own daughter, Dylan Farrow. I have tried, as others have, to compartmentalize art and humanity. I have tried, and it shames me, to believe that certain transgressions can be overlooked in the face of great art.

We are in the midst of awards season and Woody Allen is being feted, once again, for his latest movie, "Blue Jasmine." At the Golden Globes, Hollywood’s willful denial of Woody Allen’s tainted history was on full and repulsive display. Allen received the Cecil B. DeMille award for lifetime achievement and Diane Keaton, his one-time muse, his Annie Hall, was there to accept on his behalf. Allen, under the guise of reclusiveness, did not face his adoring public. It is interesting, for lack of a better word, that in her speech on Allen’s behalf, Keaton said, "Woody's women can't be compartmentalized.”

At that same ceremony, Cate Blanchett received a best actress Golden Globe for her role in "Blue Jasmine." She gushed about Allen’s talent and her gratitude for his call. She did not compartmentalize. She chose art over humanity. Hollywood has long done this where Allen is concerned. The allegations that have followed him for more than 20 years are either dismissed or ignored.

Dylan Farrow has now written an eloquent open letter, which New York Times columnist Nicholas Kristof posted on his blog. Kristof also devoted his Sunday column to Farrow’s letter and her allegations against Allen. Kristof writes, “Allen’s defenders correctly note that he denies the allegations, has never been convicted and should be presumed innocent.” It’s an odd sort of statement to include from someone who is purportedly supportive of Farrow. Like many public intellectuals, Kristof is demonstrating the appropriate amount of concern while also acknowledging some semblance of reasonable doubt. He wants it both ways.

This conversation has, in fact, already begun. For the Washington Monthly, Kathleen Geier commends Dylan Farrow’s bravery but also acknowledges that she is not likely to boycott Woody Allen despite “Dylan Farrow’s powerful testimony.”  Geier, too, wants it both ways. Her article makes bizarre reference to Kanye West and includes a comment that it was so much easier to condemn R. Kelly than Woody Allen. The entire piece is difficult to parse and demonstrates the challenge of public intellectuals awkwardly grappling with certain topics.

As the latest discourse about Woody Allen unfolds, I doubt anyone’s minds will be changed. I know where I stand and why. I know I would rather stand where I stand and eventually be proven wrong than support Woody Allen and eventually be proven wrong. We believe what we believe and it isn’t the place of public intellectuals to adjudicate such a fraught matter, to boldly declare who is right and wrong.

Instead, public intellectuals can and should critique the culture that makes this conversation possible, the culture that leaves too many people wondering whose side to take, and the culture where people are contemplating (and compartmentalizing), in any way, Allen’s “artistic legacy.”

We can consider how nearly every single article about Allen and these allegations refers to Dylan Farrow as his “adopted daughter,” instead of his daughter, as if that designation, by creating some distance, somehow lessens his alleged crimes.

We can consider how people seem to want to believe false rape and sexual abuse accusations are the rule rather than the exception. Why wouldn’t they? The truth and pervasiveness of sexual violence around the world is overwhelming. Why would anyone want to face such truth?

We can consider how little there is to be gained from false accusations of sexual assault.

We can consider what it costs to stand up and say, “I am the victim of sexual violence.” The exposure of those wounds, the intense vulnerability of admitting how you have been trespassed against, is not some kind of compensation for the crime you have suffered.

We can consider the fact that rape is a significantly underreported crime. According to the Justice Department, 60 percent of rapes go unreported. Only 3 percent of rapists will spend even a day in prison. It’s no mystery why more victims don’t come forward. There is far too little to gain at far too high a cost. Justice and dignity are elusive. Instead, victims have to recount their story to an often skeptical audience. They have to endure, if they’re lucky -- if they are lucky -- a trial and the machinations of the justice system, and then hope their attacker is found guilty and sentenced to an appropriate prison sentence while knowing that there is rarely a prison sentence that can adequately provide justice for the crime of sexual violence.

We can consider the dangerous power of celebrity and the cult of the brilliant artist and how all too often celebrity impedes our willingness to condemn.

We can consider how the evening after Dylan Farrow posted her open letter, Woody Allen was seated in the second row at Madison Square Garden, enjoying a Knicks game because he could, because that is what our culture allows.