He destroyed his ambitions for nothing. The wingnuts who vote in GOP primaries despise moderation, bipartisanship 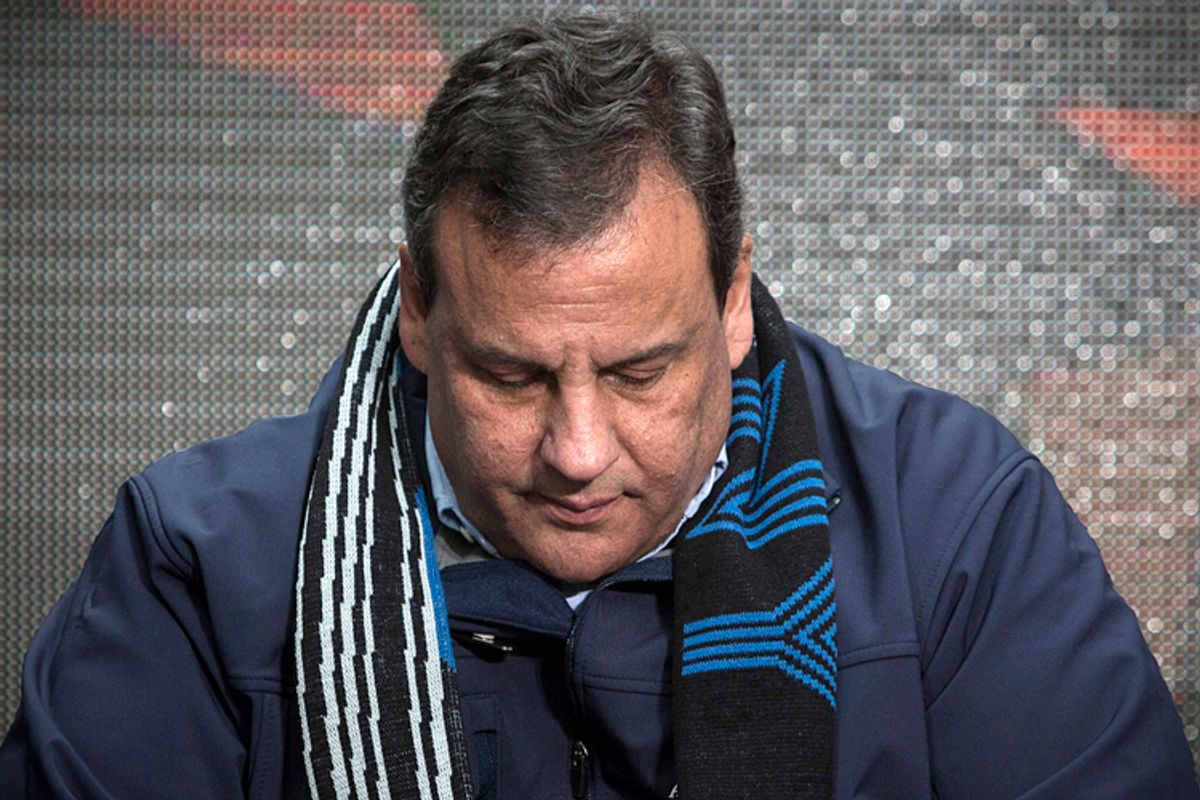 The most confounding piece of the Chris Christie debacle is the dubious political strategy at the root of all it all. Christie and his goon squads, and their mafia-style tactics, were employed for the purpose of trying to get Democrats to endorse him on the premise that it would strengthen his brand in the 2016 GOP primary. He wanted to showcase his broad appeal on the political spectrum -- his electability, in other words.

Apparently the Christie political team has not been following the arc of the modern Republican Party, at least in the America that lies outside of the New York metro area. The conservative wing of the GOP, aka primary voters, have little interest in candidates who trumpet their moderateness or bipartisan appeal. These are voters who are likely to believe that Obama was born in Kenya and is a Muslim; that climate change is a hoax; that John Boehner is a liberal sellout; and that if John McCain and Mitt Romney had only acted like true right-wingers, they would have become president. And they don’t like anyone who thinks otherwise.

To prepare himself for a 2016 primary, Christie should have instead been trying to mask his Northeast-moderate body odor that repulses right-wingers in the interior states. One poll had already shown clearly that a sizable chunk of national GOP voters would not vote for him, and saw him as a noxious Republican in name only, to be mistrusted.

As for the polling that had him leading the 2016 field,  recall that Rudy Giuliani had the same lead two years before the 2008 primary. He and his political team (from which Christie later hired his own advisers) were certain that the early data heralded a coronation. Giuliani later discovered that as someone from Manhattan with a moderate smell, he had no chance at all of winning a single battleground primary in states such as Nevada, Iowa, South Carolina or even New Hampshire. The early polling, that he and his team had swallowed like bait, had been merely a reflection of name recognition. He ended up spending all of his resources in Florida, hoping to get support from Northeast transplants. When even they rejected him, he was quickly finished off.

Other Republicans have made the same gross misreading of the national party.  Jon Huntsman, the former Utah governor, thought that by accepting an ambassadorship in the Obama administration; speaking Mandarin Chinese on "The Colbert Report"; warning about the realities of climate change; and announcing his candidacy in New York in front of the Statue of Liberty, that he could secure the moderate, educated voters he believed were the key to winning the 2012 Republican primary. He thought they’d be drawn to his electability. He got under 1 percent of the vote.

And yes, there’s a moderate sect of the Republican electorate but those voters would have started out firmly in the Christie camp, especially if Ted Cruz or Rand Paul were the alternatives. Christie’s job, it seems to me, was to find a way to excite conservatives in the Central and Mountain time zones with some red meat, while not hurting his gubernatorial reelection bid, which was never really in doubt.

But alas, poor Christie allowed his ego or perhaps a provincial mind frame to get the better of him, abetted no doubt by the Wall Street types in the metro area whom he hung out with and raised money from; and maybe by the Hollywood entertainment moguls who swooned in his presence at the posh annual Sun Valley Media Conference in Idaho, which he addressed in 2013 to a standing ovation.

In the real Idaho, like the Idaho Republican Party, the talk is of returning America to the gold standard, strengthening gun rights in the wake of massacres, and repealing the 17th Amendment (which requires popular election of U.S. senators). And even this stuff is not good enough for some. A huge faction of conservatives has recently left the Idaho GOP, complaining that it has “been overtaken by liberals.” Plenty of other states look the same.

It was this collection of lunatics, apparently, that Christie thought he would impress by showing that he could get the endorsements of Democrats such as Dawn Zimmer, the liberal, female mayor of Hoboken; or Steve Fulop, the mayor of Jersey City who enjoys marrying gay couples in public ceremonies. Upon such a calculation, Christie sent his specialists out to twist their arms and even break the law if necessary. It has proven to be an expensive folly.