Sochi's post-Olympics time bomb: Can the city survive when the games are gone? 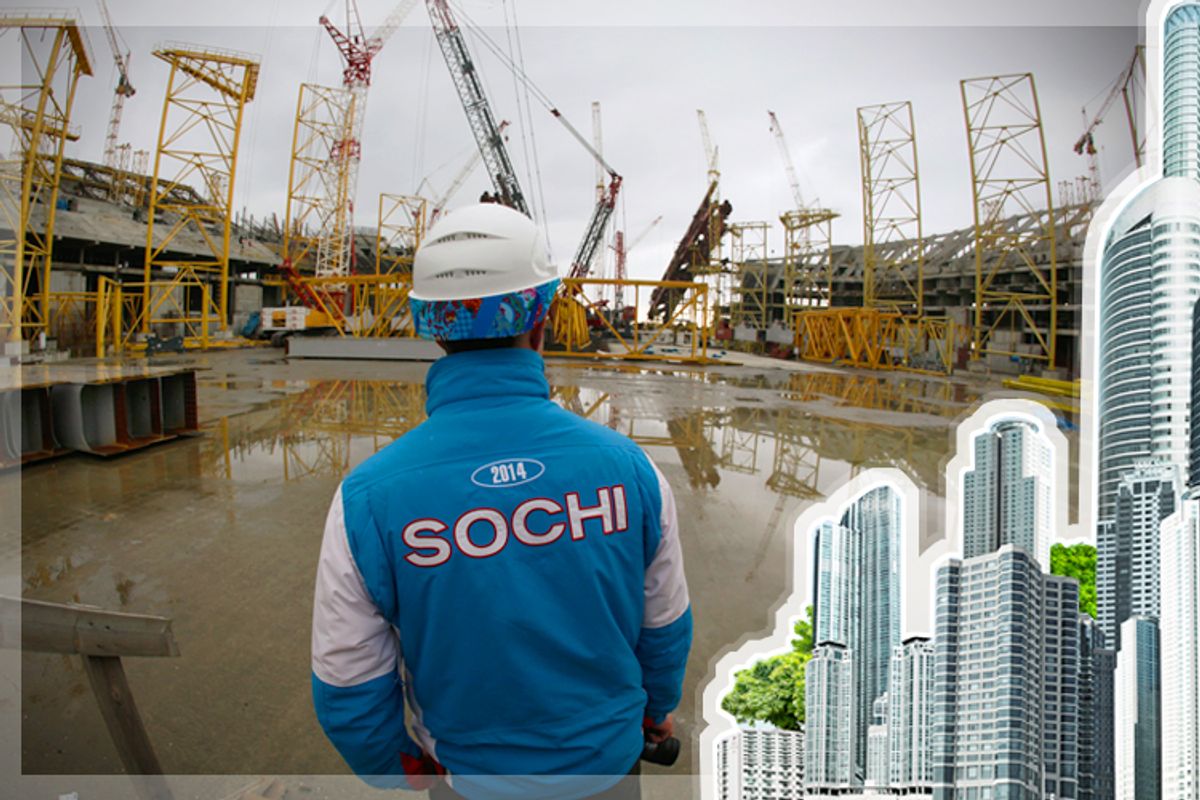 In the muffled melodies of Portuguese, this might sound like the Paulista equivalent of hakuna matata. The sentiment is in fact the opposite: Imagine the World Cup. Something has gone wrong today? Imagine what things will be like when the World Cup, a half-million visiting fans in tow, descends on Brazil for four weeks this summer. As Brazil’s preparations flounder towards completion, this comic remark carries an undertone of dread.

The apprehension is partly reflexive; city-dwellers are by nature overstimulated. Skepticism to global sports pageantry is a default setting, open excitement the mark of tourists and country bumpkins. When the competition finally arrives -- as at the London Games two years ago -- world-weary urbanites often wind up enjoying it all in spite of themselves.

Yet events on the grandest scale also engender more grave and lasting doubts: The party lasts only a few weeks. The memories will last longer. The infrastructure — and the debt engaged to build it — will endure longest of all. When skeptics ask, "Why bother?" the answer had better involve long-term plans, for the worth of the Olympics will ultimately be measured by the use of their urban footprint.

This standard ought to be applied with particular scrutiny to the Winter Olympics in Sochi. These Olympic Games are the most expensive in history. They will take place “on the edge of a war zone,” and in one of the only areas of Russia that is not reliably covered by snow each winter. So what will the $51 billion investment do for Sochi, and for Russia, when all the television cameras have gone home?

The logic can’t be reduced down to economics. Olympic planners often envision the games as a transcendent event capable of renewing a country’s spirit, and Sochi is no exception, but it only sometimes works out that way. In 1964, Tokyo became a symbol for the new Japan, a dazzling phoenix city risen from the ashes of the fire-bombing not two decades earlier. More recently, the 2008 Olympics in Beijing were seen as an announcement of China’s newfound confidence. The intention of the 1972 games in Munich, by contrast -- to reintroduce West Germany to the world with “Die Heiteren Spiele” ("The Happy Games") -- was marred by the murder of 11 Israeli athletes and coaches.

There is no doubt that Putin has viewed Sochi -- woefully unequipped for the competition and situated on Russia’s contested southern border -- as a kind of personal challenge. Quashing the movement for Chechnyan independence was Putin’s great foreign policy triumph, and what better symbol of the New Caucasus than a shiny vacationland in Sochi?

Putin believes this optimism will resonate throughout Russia. Here’s Christian Caryl, writing in the New York Review of Books:

Putin explicitly links the Games to the humiliations of the recent past: "There is also a certain moral aspect here and there is no need to be ashamed of it," he said. "After the collapse of the Soviet Union, after the dark and, let us be honest, bloody events in the Caucasus, the society had a negative and pessimistic attitude." The Olympics, he explains, "are a necessary part of an effort to ‘strengthen the morale of the nation."

The anti-gay laws, stray-dog extermination, shower surveillance and frantic terrorist manhunt may have prematurely skewered Sochi’s chance to bolster Russia’s image abroad. It is hard to tell how many Russians share Putin’s buoyant attitude -- or if they do agree that Sochi constitutes a moral watershed, a chance to replay the spurned Moscow Olympics of 1980. Do they consider it worth the cost?

For the most part, it seems, Sochi is viewed as a pet project of President Putin and his merry band of oligarchs (who have ostensibly "earned" the construction contracts). These Winter Olympics are an “extravagant caprice,” with few pretensions to rallying national sentiment. In a neat bit of symbolism, Russia put the search for a Sochi mascot to an online vote, only to find that voters overwhelmingly supported a bug-eyed frog called Zoich. The satirically patriotic amphibian was later excised from the competition in favor of the more regular bear, hare and leopard.

Corruption has been rampant in Sochi Olympic construction (as in so much construction), and so while the Winter Games remain Russia’s largest building project since the fall of the Soviet Union, appearances fall short of the eye-popping $51 billion price tag. (In the process, Sochi has surged past the Beijing Olympics, which were approximately four times the size, yet cost a significantly smaller sum, $44 billion.)

As foreign visitors giddily count and recount the flaws of Sochi’s facilities, investigative journalists race to uncover corruption in time for Olympic media attention. One IOC official estimates that one-third of the $51 billion was stolen; Russian opposition figures say the figure is higher. At $8 billion, the 30-mile road-rail line from the Black Sea to the inland resort cost more than the entire Vancouver Olympics. For that price, the Russian Esquire notes, the entire road could have been coated in a centimeter of caviar.

When all is said and done, the Olympics are a momentary spectacle. The memory of Sochi's would-be amphibian mascot, Zoich, will melt away come springtime. The athletes and visitors will go home. What remains will be a shiny new city, dearly bought, used once, and with an uncertain future.

Historically, the infrastructural promises of the Olympics are even more likely to fail than the abstract rehabilitation efforts. The roster of post-Olympic abandon is deep, and sometimes grim. In 1993, during the Siege of Sarajevo, the wooden seats of the Zetra Olympic Stadium were recycled to build coffins. More facilities simply lie fallow, like those in Beijing. Maintenance is expensive and sustainable reuses are few and far between. China’s iconic Bird’s Nest, one of the lucky ones, began hosting an annual freestyle skiing event this year.

Sochi aims higher — and may have farther to fall. In Soviet times, the city was a popular tourist destination. Josef Stalin, a Caucasus native, spent his summers at a dacha nearby. But prior to the Olympic construction binge, the resort city had a decidedly different vibe. Rob Hornstra and Arnold van Bruggen, authors of "The Sochi Project," described it this way to the Atlantic Cities:

“Like the Florida of Russia, but cheaper," a Russian lady in the U.S. told us. You have to imagine an old, once glorious bathing and curing town filled with "Palaces for the Proletariat" where the decline of Communism and the wild 1990s have taken their toll. You have to imagine tourist brochures filled with palm trees and glorious beaches, while in fact you'll be lying down on pebbles against a concrete wall with modern high rises behind you. It can be a fun city though; it's rowdy and it's loud.

Inspired by a skiing trip to Austria a decade ago, Putin’s goal in hosting these Olympics was to create a year-round, world-class tourist destination ("Hot, Cold, Yours") that makes the glamorous Soviet Sochi of yore look like Myrtle Beach by comparison. Together with the reconstruction of Grozny, this is Putin’s two-pronged economic plan for the Caucasus. Sochi offers a freshly renovated ski resort that supposedly rivals the great slopes of the Alps, and a Grand Prix booked for the coast through 2020. In four years it will be the site of several World Cup matches. Sochi, then, is somewhat better prepared for the Olympic hangover than some of its predecessors. It has bookings on the horizon.

But ensuring the continued use of a ski jump that cost as much as the Washington Post is the least of the long-term planning concerns here. Russia has also added  200 miles of roads, 55 bridges, 13 train stations, nine hotels for media outlets, six post offices, five schools, [and] a new airport.” And then there’s that 30-mile, $8 billion road-and-rail link.

The scale of ambition in Sochi more closely resembles an experiment in Soviet central planning than typical Olympic preparation. The task is no less than the permanent transformation of a regional economy.