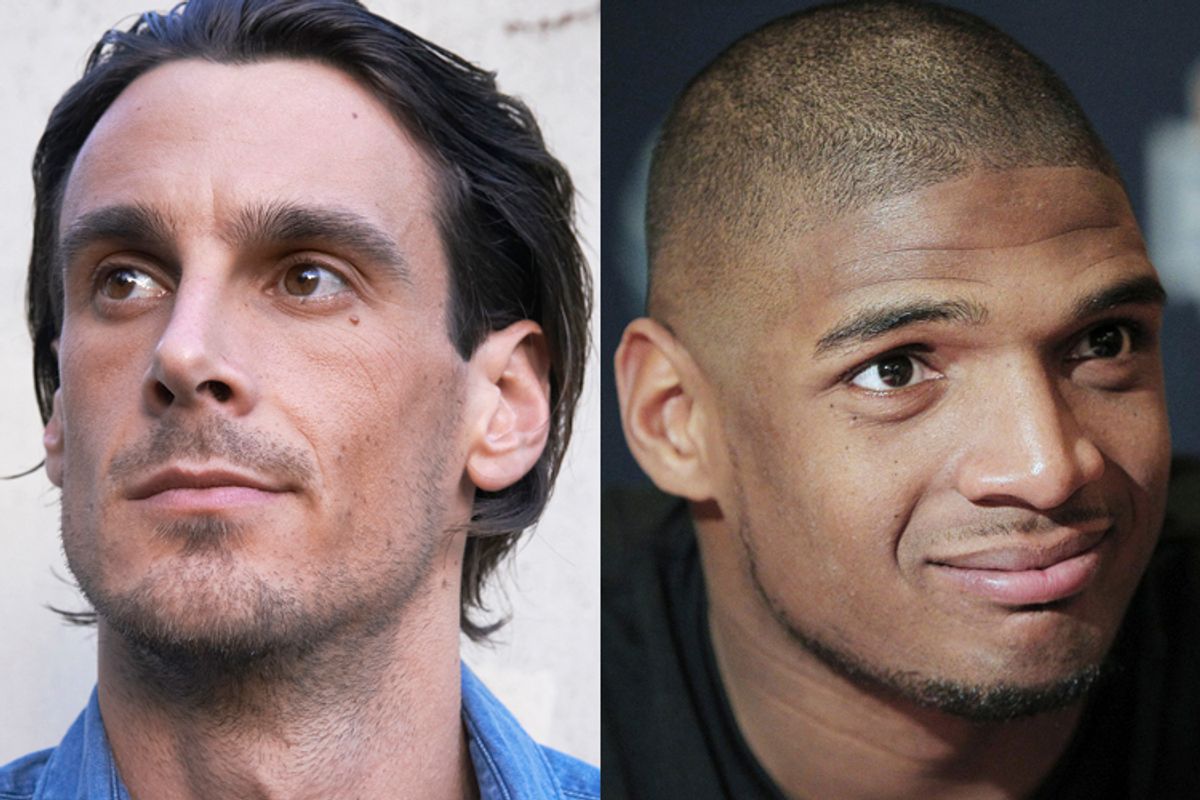 The night before making international news by coming out as gay, NFL prospect Michael Sam huddled with a handful of ex-NFL players – including former Vikings punter Chris Kluwe, who last month alleged that his gay rights advocacy cost him his job. “I told him that by and large, the players wouldn’t be a problem,” Kluwe told Salon, but that the “older white men” who own and run the teams would be a different story. In a Monday interview, Kluwe predicted that Sam’s fate come draft time would be an “important litmus test” for closeted athletes considering coming out, and that a disappointing pick would “tell us a lot about how the NFL is currently viewing the world.”

“This is something that is going to be part of the NFL moving forward,” said Kluwe, the author of "Beautifully Unique Sparkleponies: On Myths, Morons, Free Speech, Football, and Assorted Absurdities." A condensed version of our conversation follows.

When did you first learn that Michael Sam was gay?

When I met him at the dinner [Saturday night].

How did that dinner come to be, and what was it like?

I was invited to attend by the P.R. guy, Howard Bragman, who’s been working with Michael … It was just kind of a get-together to celebrate what Michael’s doing, and just help him know that there will be support behind him. And … try to get him ready for what he might potentially have to face in the NFL, in terms of the locker room and coaching staffs and stuff like that.

What did you say to him at that dinner?

I told him that by and large, the players wouldn’t be a problem. You know, players don’t really care that much about, you know, another player’s sexuality, or skin color, or religion or whatever …

The opposition’s going to come from ownership, and GMs, and front office people, and coaches. Because they tend to be older white men, with a very specific viewpoint of the world. And you know, it’s unfortunate, but that’s the generation they were raised in. And a lot of them are having trouble changing.

So I told him, you know, just be aware that this is something that can happen, and that there could be people who won’t understand, who won’t get it. And just be prepared for that …

What kind of impact is this going to have in football and in professional sports?

Hopefully a good one. Hopefully Michael will get the chance to play, to show that he has the athletic ability to compete in the NFL. Because from everything I’ve seen, he does have that ability.

And you know, hopefully it’ll help other guys who possibly are closeted, or are thinking of coming out, that there are other gay players out there. There are role models, you know -- you’re not alone. And hopefully this serves as an inspiration for them.

How do you think this is going to affect him in the draft?

I hope it doesn’t affect him in the draft. I mean, the draft should be based on your football skills, not your sexuality …

If he ends up sliding down to the later rounds, or even out of the draft, then that will tell us a lot about how the NFL is currently viewing the world.

Are you satisfied with how the NFL has responded so far to his coming out?

Well, they haven’t really had a whole lot to respond to, other than the fact that Mike has openly said that he’s gay.

And you know, it’s kind of discouraging to see the Sports Illustrated piece where anonymous executives are essentially saying the exact same things that teams were saying when Jackie Robinson was playing Major league baseball. You know, that’s a little alarming …

You mentioned that you think the opposition is going to come from the higher-ups. What shapes that? How much is that about personal bias? How much of that is a perception about how it’s going to affect the bottom line, or something else?

Well, I think quite a lot of it is personal bias, and it’s disguised under the code word of “distraction.” I mean, you look at what happened with Richard Sherman, where he all of the sudden became the center of attention, and people were using the word “thug,” very clearly … to mean “the N-word.” And right now, in the NFL … the word “distraction” is used as code for people who aren’t comfortable with having a gay player on their team, but know that they can’t come right out and say that.

People often talk about these various locker room scenarios. Most people in America in America will never actually be in a professional sports locker room. What is it actually like? How are people interacting? What are they talking about?

Well, it’s actually a lot like any other workplace environment. You know, you’re there to do a job -- and yeah, the job happens to be playing football at a very high level -- but there’s a lot of downtime. There’s a lot of time spent talking with each other, and getting to know guys. And it’s pretty much that during the season, we spend more time with each other than we spend with our own families. You’re at the facility for pretty long amounts of time during the day. And so you do get to know guys really well. And these are guys that you’re counting on when you’re out on the field. So I’d say it forges probably more of a bond than you’d find in a normal work environment.

And the speculation that’s out there about people being uncomfortable with a locker room where not everybody is straight – do you think that reflects a substantial number of players?

No. I think there probably will be some players that aren’t comfortable with having a gay teammate. But at the same time, there were a lot of people who were uncomfortable with the idea of having a “colored person” play baseball, or play football …

Do you see a relationship between the anti-gay bias that some people perceive or are worried about in the sport, and the kind of masculinity that is associated with football? Is there something about being gay that challenges people’s idea about what football is, or what a football player is?

Well, I think the problem people have is that they somehow conflate the idea of gay [with] not being masculine. When the fact is that there are gay people in all walks of life, including the military, including professional sports, including just about every job out there …

If people think that the definition of masculinity somehow excludes the idea that you could be gay, then really they need to reexamine that definition. Because being masculine, or being a man, is, you know -- I would say -- being a good role model, and treating people the right way, and not necessarily being a caveman.

Do you see anything problematic about football being tied up with a culture of masculinity more generally?

I think there’s a problem in how people define it, as the current definition very much seems to be masculinity as a tool of oppression, as a tool of, you know, trying get your way, above all other ways. And I think that needs to be reexamined.

Where do you see that?

The fact that people don’t believe that a gay player can play football, because somehow that has something to do with their athletic ability. Or the idea that masculinity in our society means you have to treat women poorly -- and be, you know, a loud, brash person that is going to be the guy with the mutton chop sideburns and the lumberjack flannel … It’s very much a shallow, outdated view of the word itself.

And I think that’s something that we need to readdress as a society … Just what do we mean when we say masculinity? Do we mean oppression? Do we mean white men in power? Or do we mean all kinds of men who are trying to make the world a better place?

If the NFL is seriously committed to equality for LGBT people, what should it be doing?

It should be talking to team owners and executives and coaches, and making it abundantly clear to them that if Michael Sam is judged on anything other than his athletic power, then there will be severe repercussions. Because the NFL is a broad-spectrum business, that -- they currently have an untapped market right now, which is gay fans. I mean, the NFL traditionally has not been very welcoming in terms of LGBTQ rights.

And this is an opportunity for them to say: Hey, we know we have not been the best about this in the past. But we can change. We can make this better. And the first step in doing that is making the people in charge aware that you have to treat people equally -- you have to give everyone a chance to play.

Does anything strike you about the timing of Sam’s announcement, doing it at this point in the season and prior to the draft?

I think it’s good that Mike is coming out with it now. Because what that does is that, you know, it shows teams: This is who he is … This is part of who he is as a person. He can play football at a very high level. So, you know, deal with it.

This is something that is going to be part of the NFL moving forward.

Do you expect we will see more NFL players or NFL prospects coming out soon?

I think we’ll probably see, maybe in a year or two, after guys wait and see what happens with Mike. Because I think that’s going to be an important litmus test for them … Is Mike treated fairly? Is he given a chance?

What happens in the scenario where he’s not?

Well, I imagine I’d probably write a pretty angry letter and post it somewhere. You know, it’s something that I think a lot of people will be watching, and will be keeping track of what happens -- to ensure that if Michael is discriminated against, if he isn’t given a chance, well, then that is brought to people’s attention, and we have that discussion in this society. Are we OK with that? Are we OK with discriminating against people?

The way that your career ended there – is there a lesson there?

Yeah. I think that’s an example of what can happen when people are allowed to do what they want, and discriminate, and not have to worry about consequences. And I think it’s important, because it’s not just something that happened to me. It’s something that happens to millions of people of this country …

There’s a multitude of states where you can be fired simply for being gay, for your sexuality, and I don’t think that is the fundamentally sound basis of a stable civilization.

I think sports impacts highly on what happens in other workplaces, because sports is a very common factor that unites people … This is something that people are aware of, that people talk about. And when you have those conversations in the sporting world, then that trickles down to a lot of other segments of society that may not necessarily have been talking about the issues.

What would you say to Michael Sam now, about going forward?

Just stay relaxed, you know, keep playing like you know how to play. Because that’s what got you here. You’ve shown you have the talent to be at this level, and just go out and keep doing it.