Elizabeth Warren vs. the neoliberals: The battle over Americans’ retirement security 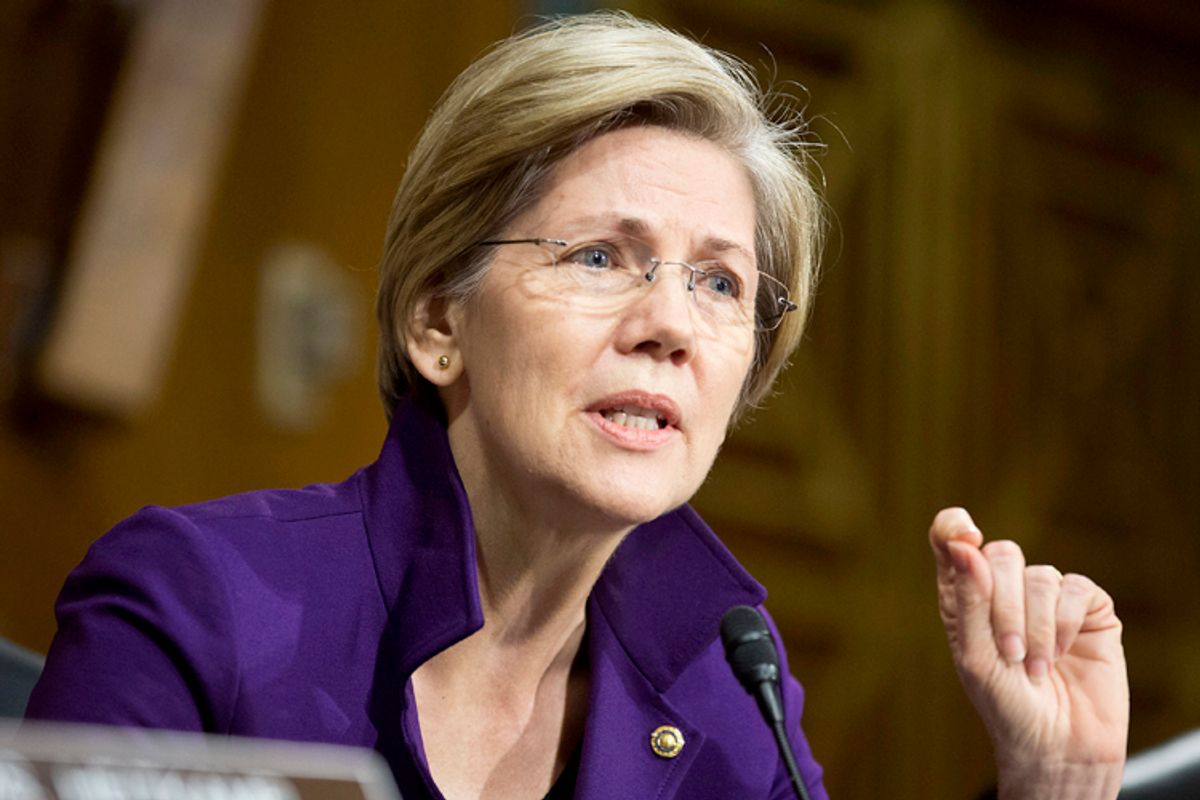 In the last year or two, something remarkable has happened in American politics. After decades in which future deficits, mostly caused by healthcare costs and conservative tax cuts, were invoked by those seeking to slash Social Security benefits for reasons of ideology or pecuniary interest, the national conversation has changed. Preceded by intellectual pioneers like Atrios and Social Security Works, Sens. Tom Harkin and Mark Begich have proposed to slightly expand, rather than contract, Social Security benefits. My New America Foundation colleagues Robert Hiltonsmith, Steven Hill and Joshua Freedman and I have proposed a more radical expansion, coupled with caps on 401(k)s and other tax-favored retirement savings programs, which chiefly benefit the richest Americans. By endorsing the concept of expanding Social Security, Sen. Elizabeth Warren lent credence to an idea that has gained the support of mainstream pundits like Ezra Klein and Matthew Yglesias.

Unfortunately, nobody has told President Obama.

In a speech in Pittsburgh on Jan. 29, the president fleshed out the My Retirement Account (MyRA) proposal he mentioned in his State of the Union address. The president’s remarks begin promisingly enough:

Today, most workers don't have a pension in America,” he added. “Just half work for an employer that offers any kind of a retirement plan. A Social Security check is critical, but oftentimes, that monthly check, that's not enough. And while the stock market has doubled over the last five years, that doesn't help somebody if you don't have a 401(k).

All of this seems like a lead-up to a Warren-like endorsement of proposals to expand Social Security benefits, right? Well, no.

President Obama, you must remember, is not a progressive, notwithstanding his occasional support for progressive measures like universal pre-K or a higher minimum wage. The president is a neoliberal in the tradition of Bill Clinton and the old “New Democrats,” an “Eisenhower Democrat” not a “Roosevelt Democrat,” determined to be perceived as centrist at all costs.

And during the last generation, the formative period in which the president rose in his career in American politics, the official “centrist” position on Social Security called for cutting Social Security benefits while increasing tax-favored defined-contribution savings plans like 401(k)s and IRAs — thereby shifting risk from the government to the individual. In the echo chamber of the mainstream media, this position was portrayed as the reasonable, respectable, responsible center — midway between the irresponsible right, which sought to completely abolish Social Security and replace it with tax-subsidized private accounts, and the allegedly irresponsible left, which sought, not to expand benefits, but merely to pay Americans the future Social Security benefits they have been promised.

Call these three schools of thought about Social Security, from right to left, the abolitionists, the cutters and the defenders. The defenders of present-day Social Security, from the 1980s until recently, have been treated as representing the furthest acceptable liberal position. During the last few decades, those who occasionally proposed going beyond merely defending Social Security from the cutters and the abolitionists, and suggested actually boosting benefits to some degree, were excluded from the elite conversation. They were not invited to panel discussions; they were not asked to join commissions; they were not subsidized by think tanks; they were ignored by the major media. The Social Security expanders were treated as members of the lunatic fringe, as though they were Trotskyists proposing the nationalization of industry or Bryanite agrarian populists demanding a bimetallic currency.

This powerful orthodoxy undoubtedly explains Obama’s own position on Social Security — which is that of a cutter. In an earlier budget the president endorsed a favorite proposal of the Social Security cutters — using chained CPI, an alternate measure of inflation, as a stealthy, indirect way of cutting benefits for most working-class and middle-class elderly (on the evident assumption that they would be too ill-informed to notice that their benefits had cumulatively been cut).

Typically members of the Cut Social Security school combine proposed cuts in benefits with this or that expansion of the ever-proliferating number of tax-favored private savings schemes and a few generous-sounding token subsidies to the poor. America’s Cutter-in-Chief Obama is no exception. Having already proposed using chained CPI to cut Social Security benefits, he now proposes yet another tax-favored defined-contribution scheme that is supposed to help the poor in particular.

Obama’s MyRA proposal (already being pronounced “Myra” as in Gore Vidal’s famous transsexual Myra Breckinridge, rather than “My RA”) is an unintentional parody of Clinton-Obama neoliberalism. To satisfy the requirements of classic neoliberalism, a proposal has to meet the following tests:

To begin with, Myra (as we’ll call her henceforth) is symbolic, cheap and small-bore. The president proposes that qualifying employees be allowed to hold some safe government securities for a maximum of 30 years or a mature investment of $15,000. Divide $15,000 by 30 years of retirement and you get $500 a year or an extra $41.66 a month. I’m sure the poor elderly will be grateful for the small but kind neoliberal gesture.

Myra is also unnecessarily complex and subsidizes the money-management industry. As Michael Hiltzik points out in the L.A. Times, “Once the accounts reach $15,000 in value, they would have to be rolled over into a conventional Individual Investment Account. That's a sop to the financial services industry, which makes billions from managing IRAS.” But from the perspective of neoliberal Democrats, who raise far more money from Wall Street than their progressive rivals, a program for the poor that incidentally subsidizes the fee-raking money manager elite is ideal. In the words of Gore Vidal, the creator of the other Myra, the American system is socialism for the rich, capitalism for the poor.

Sadly, this is the kind of thing that we have come to expect from President Obama, at least when it comes to retirement security. His idea of a centrist, after all, is the right-wing Republican Alan Simpson, whom the president appointed to co-chair his National Commission on Fiscal Responsibility and Reform, and who described Social Security as being “like a milk cow with 310 million tits!”

The good news is that the national conversation about Social Security seems to be changing, even if the Obama White House has not received the memo.

Nobody but a few libertarian die-hards and dead-enders still hopes for the complete replacement of Social Security by a radically new system of private accounts. George W. Bush’s push for mere partial privatization of Social Security stalled because of resistance from Republicans in the Republican-controlled Congress. The dream of the '90s privatizers lives on only in the Portlandias of the right like the Cato Institute and AEI.