Skipping the airport, saving the planet: My 19-hour carbon-saving jaunt across America

My plane trip would've been a carbon-emissions nightmare, so I tried an experiment: Taking the train 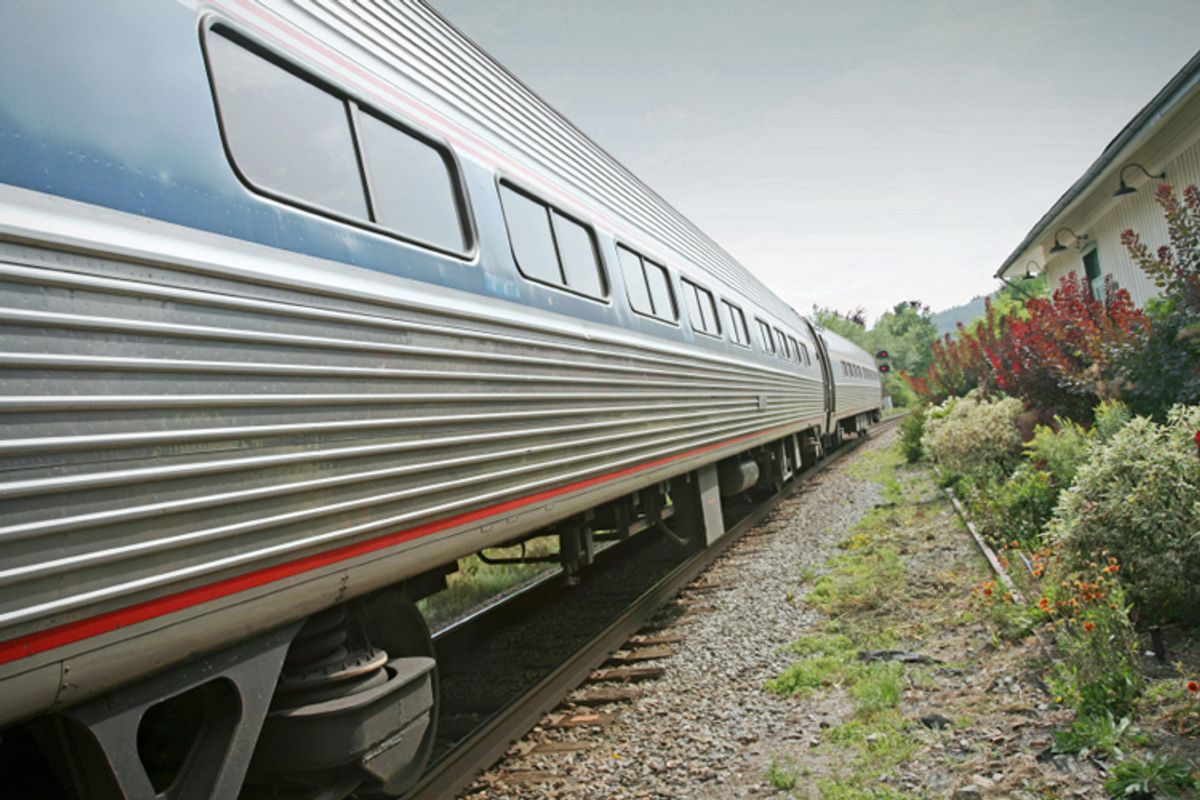 I consider myself environmentally conscious: I live in a New York City apartment with tinier–than-normal energy-efficient appliances, I bike or take public transportation most places, I compost, the bulk of our food comes from the local farmer’s market, I live walking distance to work, I fly only rarely. However, when I needed to go to the Ragdale Artists Colony in Lake Forest, Ill. (an hour outside of Chicago) to finish my novel, I took a look at the University of California, Berkeley’s carbon calculator to see how much the short-ish flight would set the planet back. I did a double-take: the single NYC-Chicago leg alone would add almost half a ton of carbon to the atmosphere. I understand better, now, why meteorologist Eric Holthaus, after reading yet another dispiriting report on human-caused CO2 emissions, tweeted that he would no longer fly because “it’s not worth the climate.”

What if, instead of the automatic move to buy a plane ticket for mid-distance travel, I took public transportation to get there? Amtrak’s Lake Shore Limited goes directly from Penn Station to Chicago. Advantage: the whole trip for less than one-third the cost of a plane ticket. Disadvantage: Amtrak would take about 19 hours. But besides the time, money and environmental impact, what might be some of the subtler advantages and disadvantages of each?

To find out, I decided public transportation would take me to the Colony, and I'd take my usual planes and taxis on the way back.

An overnight train has the advantage that a chunk of that will be spent asleep -- at least, that is the idea. I’m not a good sleeper on planes, but Marc Magliari, an Amtrak spokesman, told me that overnight trains were equipped with sleep-friendly seats that were actually quite comfortable.

It was a beautiful afternoon on my trip out. I’d be spending two weeks at Ragdale, so I’d packed my laptop, a half-dozen books, notebooks, coffeemaking apparatus, food for the 19-hour trip (I have dietary restrictions and an aversion to Amtrak pizza), and other essentials of daily living. It took a larger-than-carry-on rollaway suitcase plus a Sherpa-type knapsack to hold all the stuff, making me feel precarious as I lugged it all down the steep stairs of the subway, but on the 25-minute ride to Penn Station, I was treated to an impromptu rap-gymnastics act that made up for that trouble. At Penn Station, it was a short wait, no fussing with screening or radiation-laden X-ray, and my oversize suitcase and I rolled aboard with ease.

Travelers were sorted by destination to minimize the disturbance of people during the overnight portion. People in my car looked nest-ready, lugging huge fuzzy blankets and grocery bags full of food. The atmosphere was relaxed, jovial, a bit of a team-spirit excitement -- we’re all going to Chicago! — that dissolved the on-edge, icy barriers that you often find on a plane. People took their time settling in, began chatting with their seatmates. Babies gurgled. It was a little after 4 p.m.; we’d pulled out more or less on time.

I enjoyed just sitting there, eating an apple, a spectacular view of the Hudson River spooling by. While the sleek airplane has a futuristic capsule quality, on the train, I was reminded of Proust: “I was surrounded by the soothing activity of all those movements of the train which kept me company.” Modern Proust, should he have wanted to work on "In Search of Lost Time," would have been happy to see that every seat has an electrical outlet (the electricity generated by the train’s movement), so the writer's laptop never need run out of juice.

However, leaving aside the romantic idea of riding the rails into the American heartland, rail travel has its disappointments. It’s analog, not digital. In Albany, we were greeted by an empty, desultory station with a commuter-type coffee place. The fresh air on the platform was already turned to smog by the smokers. This is also the economics of train travel: It's an alternative for people who can't afford a plane ticket or own a car. So in this case, money literally buys you time.

But besides the obvious considerations of time/money and carbon footprint, there had to be some metric that took into account some of the subtleties of both kinds of travel.

Satyajit Bose, a professor of the economics of sustainability at Columbia, introduced me to a handy metric: “disutility,” or the cost of being inconvenienced. While I skipped the disutility of needing to get to the airport hours early with my liquids in a separate bag and being groped by the TSA, here, I was faced with the disutility of a sad train station that had given up on offering travelers succor or amusement.

Back on the train, once we started hitting the smaller towns of Utica and Schenectady, the additional disutility of Amtrak’s sharing tracks with freight trains became apparent: Amtrak had to wait for the freights to pass, which meant it was always stopping. And the tracks themselves were about the opposite of the sleek tracks of, say, the French TGV: Our train bucked and jarred so violently that my coffee (pity-purchased in Albany) actually sloshed and spilled on my tray table, for a moment endangering the Great American Novel.

But, as the sun set, I smugly pulled out a half-bottle of wine as well as the Swiss army knife needed to open it. And being able to walk around, not being strapped into place staring at the seat back in front of me, the pleasant chucking noise of the tracks rather than a jet engine's whine, gave the trip that Proustian soothe. Instead of being a carton of tightly regulated eggs hurtling somewhere, we were an impromptu community. After dinnertime, people drifted to the cafe car for an unspoken social hour. Riders played cards and exchanged stories, children cavorted, the conductors socialized among themselves. The atmosphere took on an almost old-fashioned sense of passing the time, like something rescued from a previous era. On a plane, one is so focused on the Are we there yet? Are we actually going to arrive at 1:03? On the train, you have to let yourself go to the journey, and there’s something soul-expanding about that.

Around 10, people started to retire. The overhead lights were kept on, which could have been a big impediment to sleeping. But I had, of all things, a sleep mask freebie from my publisher, promoting Stephen King’s newest, "Dr. Sleep." I also had my noise-canceling headphones, a long sweater to use as a blanket, and a seat set to deep recline. I expected maybe an hour’s worth of sleep and a lot of fitfulness. But when I peeked out from my shade, it was 8 a.m., and we were in Waterloo, Indiana.

We arrived in Chicago an hour late, which, I was told by my seatmate, a regular rider, was “on time” for the Lake Shore Limited; in his experience, multi-hour delays were more common. I would be taking the Metra commuter train to Lake Forest, but because we were late and I had to get to an entirely different station, I missed my train and had to cool my heels for another hour.

Once in Lake Forest, I walked a mile from the station in a muggy August heat, arriving in my own pool of sweat after lugging all my baggage. When I arrived at the gates of Ragdale, it was more than 24 hours since I’d left my Manhattan apartment. Indeed, at some points on our Amtrak jaunt, the train was creeping along so slowly I felt I could have gone faster on my bike, and I might be right: In a country that doesn't have the will to create a better rail system, today’s transcontinental rail travel times are — unbelievably — roughly the same as they were in the 1870s. However, my prize was the carbon footprint of a sprite: 0.4 tons (800 pounds). I'd given up my time (but not entirely, since I’d found the train an amenable work environment—no Wi-Fi, no distractions) to save two tons of CO2.

My trip back to Manhattan was crisply efficient, and way more expensive. The cab took me straight to O’Hare -- for more than half the price of my entire Amtrak fare. My disutilities were having to leave extra-early to check my bag (and pay the $25 fee), as well as allowing extra time so I could opt out of the radiation scan.

Air travel caters to those with ample disposable income, and O’Hare accordingly has an upscale-mall sleekness. I could have gone shopping for a new Montblanc fountain pen, eaten at Rick Bayless restaurant, paid $11 for a drink at the bar, or just chilled by a giant “aero” herb garden that would have looked lovely in the Albany Amtrak station.

The flight lasted one hour and 35 minutes, but for much of it I wasn’t allowed to turn on my computer. On the ground, I found myself waiting with impatience as we debarked, even though the line was moving at its normal speed. Detraining on Amtrak, people had been continuing the mellow train vibe, exchanging email addresses, sharing tips of what to see in Chicago, promising to stay in touch.

I had to wait for my suitcase to arrive, then for a taxi. But even with those extras, door-to-door took six hours, could have been closer to five if not for the checked bag and traffic. I decided, however, that the train ride had been surprisingly enjoyable, and the next time I have to go somewhere where I’d normally fly, I will check first to see if I can catch a workable train. But on my return from Chicago, as I jumped out of the cab at our apartment, after two weeks away, I was happy that half a ton of carbon allowed me to see my much-missed family that much sooner.