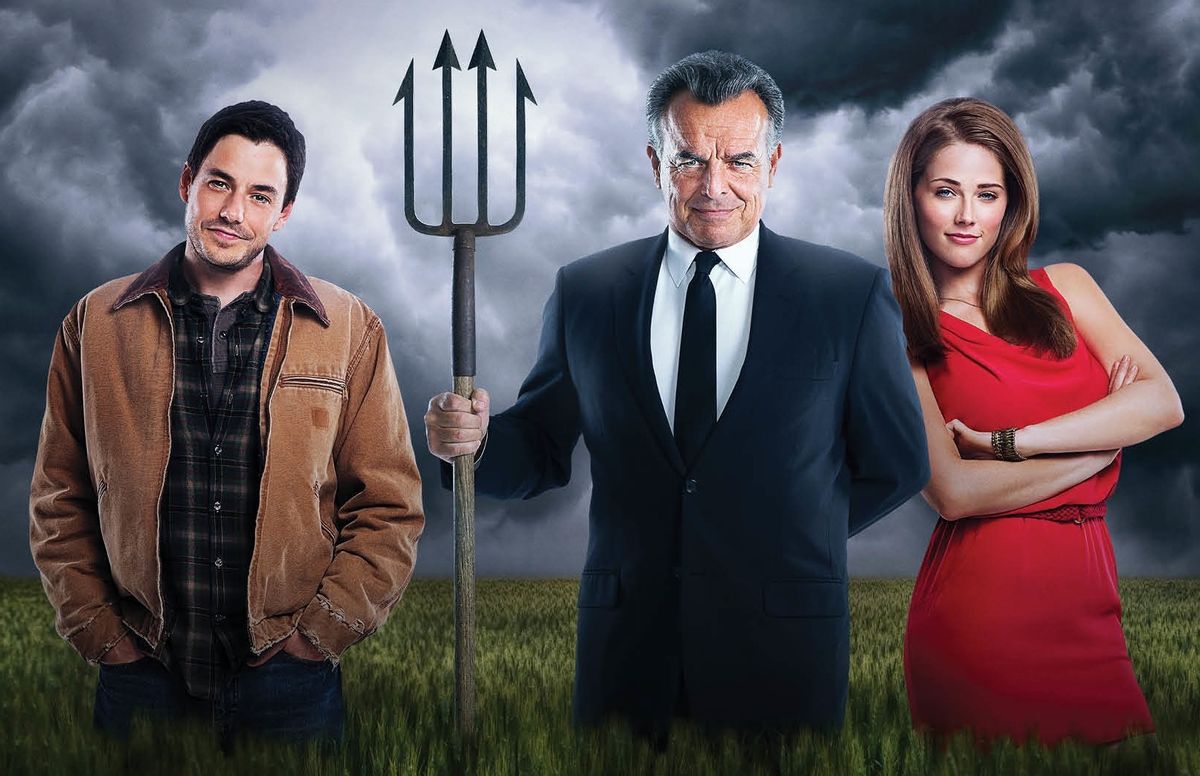 It’s over an hour into "Farmed and Dangerous," the four-part miniseries created for Hulu by Chipotle, that the fast food chain’s name is uttered for the first and only time. It happens as the camera tracks through a cocktail party, picking up snippets of idle chatter that double as punchlines: Over drinks, one well-dressed guest tells another “I heard Chipotle is actually owned by McDonalds.”

The line gets a laugh from the audience; by this point, we’ve been more than primed for the joke. It’s a slam-dunk message the company’s been trying to drive home since 2006, when McDonald’s sold its stake in Chipotle for a cool $1.5 billion. That liberation-of-sorts allowed the scrappy burrito chain to pursue a more enlightened image, divorced from the image of factory farms and mysterious chicken nuggets. As one of its producers boasted to me at the show’s New York City premiere on Tuesday: McDonalds could never make a series like this.

I myself was torn away from a "House of Cards" binge and plied with free drinks and popcorn to attend Chipotle's New York screening. Like that other made-for-the-Internet show, "Farmed and Dangerous" is fast moving, appreciably cynical and very of-the-moment. But it doesn't quite stand on its own as a work of television -- left to my own devices, I can’t quite say that I would have made it through all four episodes had I been left to my own devices.

For Chipotle, the series is the next step in a series of unconventional advertising strategies best defined by two animated shorts: Back to the Start and The Scarecrow. Both made impassioned, heartstring-tugging attacks on factory farming; both went viral online. Rather than hawking the chain's menu offerings, the videos sought to convey a broader sense of the company's values, painting itself as a tireless advocate for better practices -- an industry whistleblower that's enacting change from the inside. This newest effort is even more subtle in terms of explicit advertising for Chipotle the Restaurant, but it's more heavy-handed as a pitch for Chipotle the Good Egg.

Tim Piper, the show’s director and a partner at the advertising studio Piro, explained that the team’s goal was to produce a piece of branded entertainment that could rival its traditional, mainstream equivalent, but it's unlikely that it will be as successful as the brand's shorter, animated shorts. Evaluated solely on its merits as a television show, "Farmed and Dangerous" is just okay. While it’s often laugh-out-loud funny (at least for someone primed to get the in-jokes made at the meat industry’s expense), the plot is basic and the characters broadly sketched. It gets its laughs from its broad satirization of the meat industry and the fast food giants that subside on it, lampooning the marketers and spin doctors tasked with selling us the stuff we should know better than to eat -- in this case, the fictional PetroPellet, an oil-based food additive with the minor side effect of causing cows to explode. PR exec Buck Marshall (Ray Wise), the show’s villain, speaks to the industry’s skewed priorities: “People are dying from eating, not starving -- that’s progress.”

Chipotle's real-life (if more enlightened) Buck Marshall is Mark Crumpacker, who wears two hats -- that of the show’s executive producer, and that of Chipotle’s chief marketing officer. The overlap is both acknowledged and intentional, if not a bit ironic. The folks at Piro and Chipotle may be hipper than the squares at Marshall's "Industrial Food Image Bureau" -- whose response to a damaging viral video is “at least it’s only on the Internet” -- but they’re still paying $250,000 per episode to hawk a very pointed message.  They rarely let you forget it, either, even as the series couches itself as entertainment and takes great care to never make its intentions obvious or crass. You're always aware that you're watching an advertisement, albeit one that gets its own commercial breaks (from which, per a revenue-share agreement with Hulu, Chipotle actually makes a profit, according to a producer). As many have pointed out, this isn’t at all new -- soap operas got their name for the product they were designed to hawk -- but it belies the "whistleblower" image Chipotle's trying to promote for itself.

There's a reason why Super Bowl commercials aren't 80 minutes long. The show's anti-industry talking points are packaged as entertainingly as it’s possible for such talking points to get -- at one point, they’re literally turned into a drinking game between small-farming advocate Chip (John Sloan) and his crush/rival Sophia (Karynn Moore). Viewers at home could make a game of of their own: Take a sip every time you suspect you're being preached at, finish your drink if you manage to catch sight of a burrito. (You're not likely to; the show prides itself on being more subtle than that.)

Chipotle’s execs know that their holier-than-thou message sets them up for intense scrutiny. Critics can, and will, run through the laundry list of attacks: The company is anti-GMO, but its food isn't GMO-free. It eschews the use of antibiotics in meat production, but about 20 percent of its meat is sourced from conventional farms. Some of its beef may not be 100 percent grass-fed. And as David Sirota argued at Salon, Chipotle's good intentions can never disguise the fact that “in terms of the environment, health and morality, opposing factory farming — while laudable — is just not the same as embracing a plant-based diet.”

All of the critiques are valid, and Chipotle isn’t trying to deny any of them -- the show is a pitch not for the actual food its selling, but for the larger values the company believes it stands for. In that way, it’s caught between its critics and the larger fast food industry it’s striving to critique. The show's biting message, replete with exploding cows and eight-winged chickens, could rival anything put out by PETA. BuzzFeed came out yesterday with a post detailing the show's claims: While it often goes over-the-top for parody's sake (so far as anyone knows, cows aren't being fed petroleum), it takes a strong stance against real issues, such as the fact that it really does take a lot of calories worth of fossil fuel energy to produce one calorie of meat. The Animal Enterprise Terrorism Act sounds like a joke in the context of the show, but turns out to be real. At the premiere, the producers painted themselves as victims of Big Fast Food, accusing the industry of sending out their minions to post negative comments about the series on social media sites.

As Crumpacker explained at the screening, "Farmed and Dangerous" (like the brand itself) is Chipotle’s answer to the “whole system of fast food based on exploitation.” Its slogan might was well be: “It’s not fast food, it’s Chipotle.” Its anti-industry message is refreshing, until you remember that it’s something you’re being sold by a $16.5 billion corporation. Whether it's worth watching despite that depends on how much you’re willing to stomach.