The right's sociopathic new scam: Using Americans to harm their own health plans 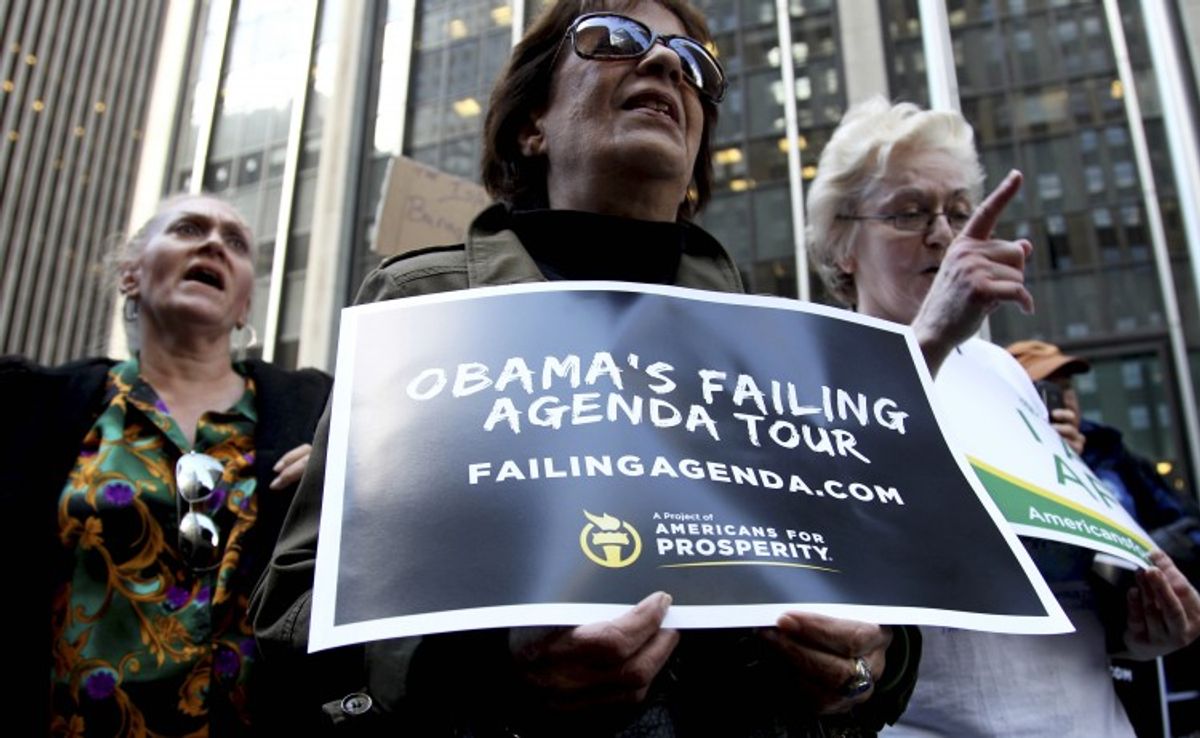 Every time an enemy of the Affordable Care Act promotes a new Obamacare "horror story," the law's supporters, and a handful of diligent reporters, are given an exciting new opportunity to assess whether the story really stands up to scrutiny, or whether it's a product of exaggeration, ignorance, malice, prejudice or a combination thereof.

But at the same time, it places Democratic politicians on the horns of an awkward dilemma, because even if the story is completely bunk, it's still a human tale, and no elected official comes out well by questioning a constituent who claims to have been harmed in some way.

Rep. Gary Peters, D-Mich., knows all about this dilemma. The right's derp Howitzer spray-fired at Peters all weekend, because his lawyers sent threatening letters to station managers in Michigan who are running an Americans for Prosperity ad featuring Julie Boonstra, whose Obamacare "horror story" isn't supported by the facts.

“The fact that Representative Peters would sic his legal team on a Michigan mother battling cancer to muzzle her tells you everything you need to know about his record of putting politics over people," reads a statement from AFP's Michigan state directer Scott Hagerstrom. “Julie Boonstra was brave enough to tell her story about how Obamacare is making her life worse and instead of offering compassion and solutions, Rep. Peters responded with intimidation ... This attack on her credibility is disgusting, unwarranted, and inexcusable. Congressman Peters and his indecent campaign team should be ashamed of themselves.”

Peters is running for retiring Sen. Carl Levin's Senate seat, so it's of considerable interest to him not to create the perception that he's bullying an innocent cancer patient. And of course he's not. But the facts at the center of the controversy over Boonstra's ad suggest a better way to expose the scam AFP is perpetrating.

Boonstra clearly doesn't like the law. And she doesn't have to like the law. But any other woman suffering with the exact same medical condition, and experiencing the exact same interactions with Obamacare -- but minus a motivated hatred of the law -- would be ecstatic about the savings and the new protections the law provides, and we would all be very happy for her.

So think about that hypothetical woman, and then think about AFP's ultimate goal, which is the complete repeal of the Affordable Care Act.

Thanks to the Affordable Care Act, this woman is saving about $6,350 this year on premiums, which coincidentally is the most an insurance company can require an individual beneficiary to pay annually in out-of-pocket expenses. In other words, the worst-case financial outcome for her is a total wash. Almost to the dollar. But that doesn't account for everything else the law has put in place to protect her from past insurance company practices, which will ultimately redound both to her personal and financial health. Her carrier can no longer rescind her plan under any circumstances. It can't invoke a lifetime cap on outlays, which would easily leave a leukemia patient effectively uninsured. And it can't hike her premiums on the basis of her health status, because that kind of discrimination is now illegal.

Now take the Affordable Care Act away. All of those stabilizing mechanisms disappear. But that doesn't mean we go backward in time to the pre-Obamacare status quo. The vanquished individual health insurance market of 2013 doesn't just restore itself as if Obamacare never happened. There's no guarantee that our hypothetical patient's old healthcare plan will be available to her anymore. She'd probably have to be underwritten all over again. And given all the uncertainty in the market, it stands to reason that any carrier willing to insure a 49-year-old cancer patient will set premiums higher than they were a year ago, perhaps at an unaffordable level, or raise them substantially at some point in the near future.

So now our Obamacare beneficiary has become a victim of Obamacare repeal. Her "horror story" features prominently in a 2018 American Bridge ad targeting her Republican senator -- Jeff Flake, say -- who voted to repeal the Affordable Care Act after the GOP swept the elections in 2016. Except unlike so many of the 2014-era Obamacare horror stories, this one actually holds up. And so do Obamacare-repeal horror stories across the country because Republicans have effectively tossed a bunch of sick people off their fortified insurance plans and made them uninsurable again.Or left them at the mercy of state-based high-risk pools, which under GOP rule are underfunded everywhere, particularly in red states like Arizona.

But of course, we're really just talking about Julie Boonstra here. If she and AFP get their way, she'll be just as much a victim of Obamacare repeal as all the people who face health circumstances similar to hers. And the saddest part of that tragic irony is that Boonstra doesn't even seem to understand what her circumstances are, or why it doesn't make sense to devote her energies to repealing the law. Boonstra told the Dexter Leader, “People are asking me for the numbers and I don’t know those answers — that’s the heartbreak of all of this. It’s the uncertainty of not having those numbers that I have an issue with, because I always knew what I was paying and now I don’t, and I haven’t gone through the tests or seen my specialist yet.”