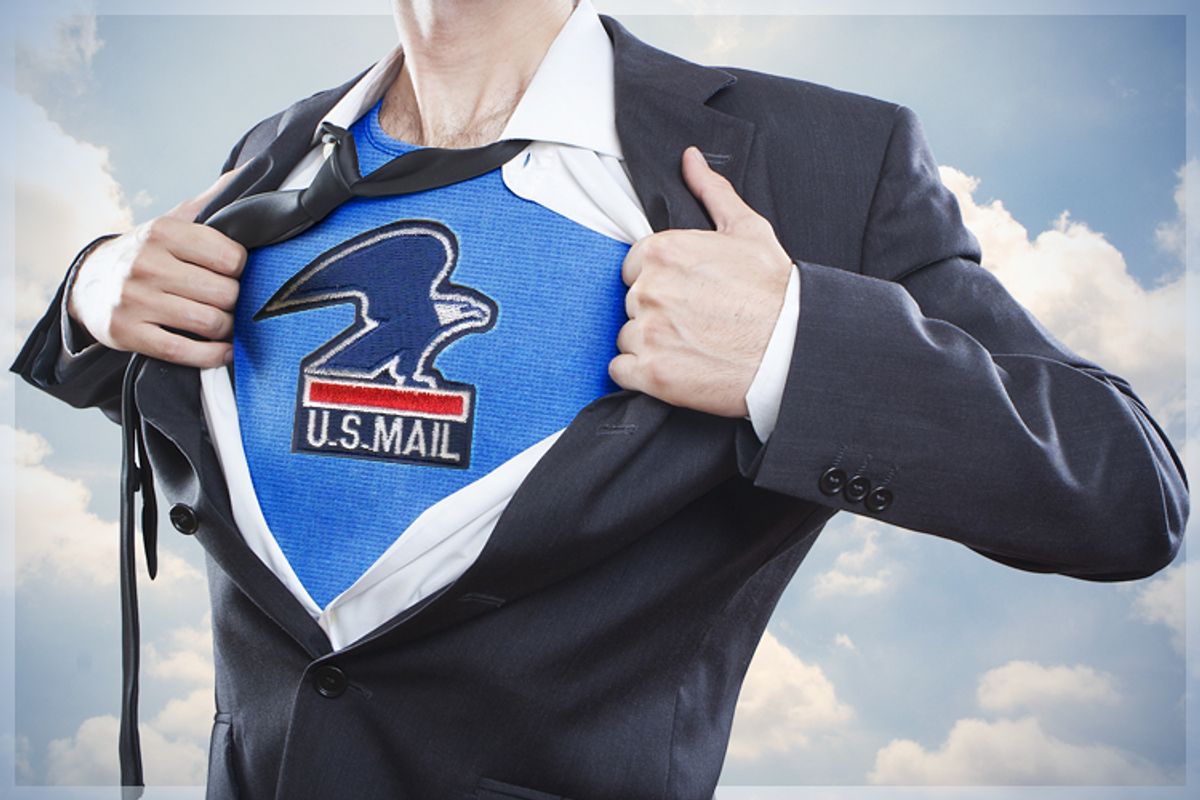 Ever since the inspector general of the U.S. Postal Service authored a white paper endorsing the concept of postal banking, more advocates and policymakers have become intrigued. Postal banking is actually an old idea: Dozens of countries offer simple financial services through their posts, and here in America, Postal Savings Accounts served millions of customers from 1911-1967 (the post office still sells money orders today). But it could also fix a number of our current problems simultaneously, even ones you haven’t thought about. Here are 10 different applications of postal banking, in order from most to least obvious:

1) Financial inclusion for low-income Americans. The most recent data from the Federal Deposit Insurance Corporation shows that about 10 million households are “unbanked,” with no access to traditional financial services. Another 24 million are “underbanked,” meaning they have a bank account but still use alternative services like check cashing stores, pawnbrokers or payday lenders. The unbanked and underbanked represent over one in four households in the U.S. In many cases they literally can’t find a bank in their communities; 93 percent of all bank branch closings since 2008 have come in ZIP codes where the average household income is below the median level. By offering basic financial services – an ATM card, an interest-bearing savings account, even potentially small loans – the Postal Service can give millions stable access to banking, a critical component of our modern society. Try renting a car, obtaining health insurance on healthcare.gov or even getting a job without a bank account.

2) Reducing inequality and boosting the economy. Unbanked and underbanked Americans pay a hefty price for their lack of access. According to the Postal Service IG report, the average household spends $2,412 a year on interest and fees for alternative financial services. This is about one-tenth of their gross income, going right into the corporate accounts of unscrupulous and predatory operations. If the post office can deliver these services at a dramatic discount, they could save families thousands of dollars, and drive the conglomerates that prey on these communities out of business. Not only does this fit with the regulatory imperative of protecting Americans from financial abuse, it gives them breathing room to pay for necessities, putting the money back into the economy. People who filed for bankruptcy in 2012 were just $26 a month short of meeting their expenses. Discounted financial services could fill that gap, lifting many Americans out of desperation and stretching their income.

3) Stabilizing the Postal Service. We should be careful with trying to balance the books of the post office on the backs of the working poor. But the good news is that the Postal Service’s finances are not as dire as advertised – most of the recent shortfall comes from them having to pre-fund retirement benefits 75 years out, something no public agency or private business has to do – and the modest income earned from basic banking services can merely help keep them flush. It’s a far better alternative than mass layoffs and branch closures at the nation’s second-largest civilian employer, which allows hundreds of thousands of families a union job and a ladder into the middle class. Post offices already have the critical physical infrastructure to serve these communities – 58 percent of their branches are in ZIP codes with one bank branch or fewer. Offering banking will ensure the Postal Service keeps those branches and survives long into the future.

4) A better way to deliver federal benefits. Did you know that Social Security benefits no longer get distributed via check? State and federal agencies, to save money and promote convenience, have started to deliver benefits through direct deposit, or for those without a bank account, through electronic benefits transfers (EBT) onto debit cards. Predictably, big banks pick up this business and charge high fees for beneficiaries to access food stamps or unemployment insurance. With postal banking, federal benefits could get loaded onto Postal ATM Cards at no additional cost, saving the government and beneficiaries money. Moreover, the unbanked would have an easy way to access their benefits.

5) A savings vehicle for the poor. President Obama tried to address the problem of inadequate savings for retirement with myRA, a savings system deducted from paychecks that earns a modest rate of return without risk of loss. I’ve written about how myRA doesn’t really do much to solve the retirement crisis. More important, myRA accounts over $15,000 must get rolled over into a Roth IRA, subjecting that money to the vicissitudes of the market and the Wall Street financial advisers who charge exorbitant fees for the privilege. The Postal Service could offer the exact same savings account as myRA, without having to roll it over. This at least promotes savings that could be used in an emergency or as a modest aid in retirement.

6) Bringing immigrants into society. Historical data shows that the old Postal Savings System was most popular with recent immigrants, who had experience doing their banking at postal branches in their countries. Currently, immigrants take advantage of the post office for money orders and “Dinero Seguro,” an electronic money transfer service to nine Latin American countries. Adding postal banking could really cater to these communities by hooking up with other global postal systems. The International Financial System of the Universal Postal Union includes over 60 countries, making it simple and cheap to transfer funds electronically from one country to another. International money transfers from the U.S. rose to $51 billion in 2012, and the Postal Service is well-positioned to facilitate this. Immigrants using a government agency could bring them closer into U.S. society and ease the hardships of our immigration system.

7) Preventing identity fraud. The recent data breaches at Target have revealed a shocking truth – America has the worst payment security system in the world, and as a result, over half of the world’s identity theft happens here. Unlike most developed countries, U.S. credit and debit cards have a magnetic stripe, instead of the more secure “chip-and-PIN” system (where cards have a microchip in them, and customers have to use a PIN number at the point of sale). If you read the excuses from major banks about why they haven’t upgraded this outdated system, you’ll see a lot of finger-pointing at retailers who don’t have the proper card readers. In reality, banks just don’t want to pay for the upgrade of issuing new cards and the customer service of dealing with forgotten PIN numbers. The Postal Service, with no old debit cards to retire, could immediately use chip-and-PIN systems and force the upgrade the country needs.

8) Modernizing the payment system. Hey, forget credit and debit cards; that’s old technology. Countries like Kenya have successfully experimented with mobile payments, making transferring money as simple as sending a text message. Benefiting from starting from scratch, the Postal Service could integrate accounts with mobile seamlessly, enabling convenient payments through smartphones for everything from utility bills to the corner store. Our current payment system is slow; it takes days for a check or debit card transaction to clear when with mobile payments it could take minutes, and banks refuse to upgrade the system (notice a pattern?). The Postal Service could serve as the backbone for a new system that would improve payments for individuals and small businesses.

9) Safeguarding personal data. Like every other business in America, banks sell your personal information to advertisers and use your data as a profit center. This is one way that predatory lenders target low-income communities, finding their leads through personal financial data. With postal banking, your information is likely to be protected by the Privacy Act of 1974, which applies to all government agencies. This would be perhaps the first legitimate halt to the mass big data grab that infects practically everything we do these days, and it would help prevent deceptive credit practices by denying crooked businesses the information they need to target people.

10) Ending recessions. Truly. Postal banking would integrate well with the concept of giving everyone with a Social Security number an ATM account with the Federal Reserve, instead of intermediating it through a commercial bank. The physical ATMs could be at any of the 35,000 postal branches nationwide (or through their mobile-enabled postal account). Rajiv Sehti, an economics professor at Barnard College and Columbia University, explains that this would allow the Fed to directly target economic downturns. When the economy lags, the Fed could place a few hundred dollars in everyone’s account, with the proviso that it gets spent immediately. That would offer an immediate and timely Keynesian stimulus, paid for by normal Fed operations (the Fed made $79.5 billion last year alone). Conducting monetary policy this way would do a lot more to help Main Street than the current quantitative easing, which raises asset prices and helps mostly the wealthy.

This menu of possibilities for postal banking makes it extremely attractive, along with the fact that, according to the inspector general report, the Postal Service may explore it under its existing authority, rather than having to hope for an act of Congress. The Postal Service Board of Governors can begin this process tomorrow by starting some pilot programs. New Board of Governors nominee Vicki Kennedy (Ted’s widow) can follow in her family’s footsteps by improving the lives of millions of ordinary Americans through postal banking, the Swiss army knife of public policy.