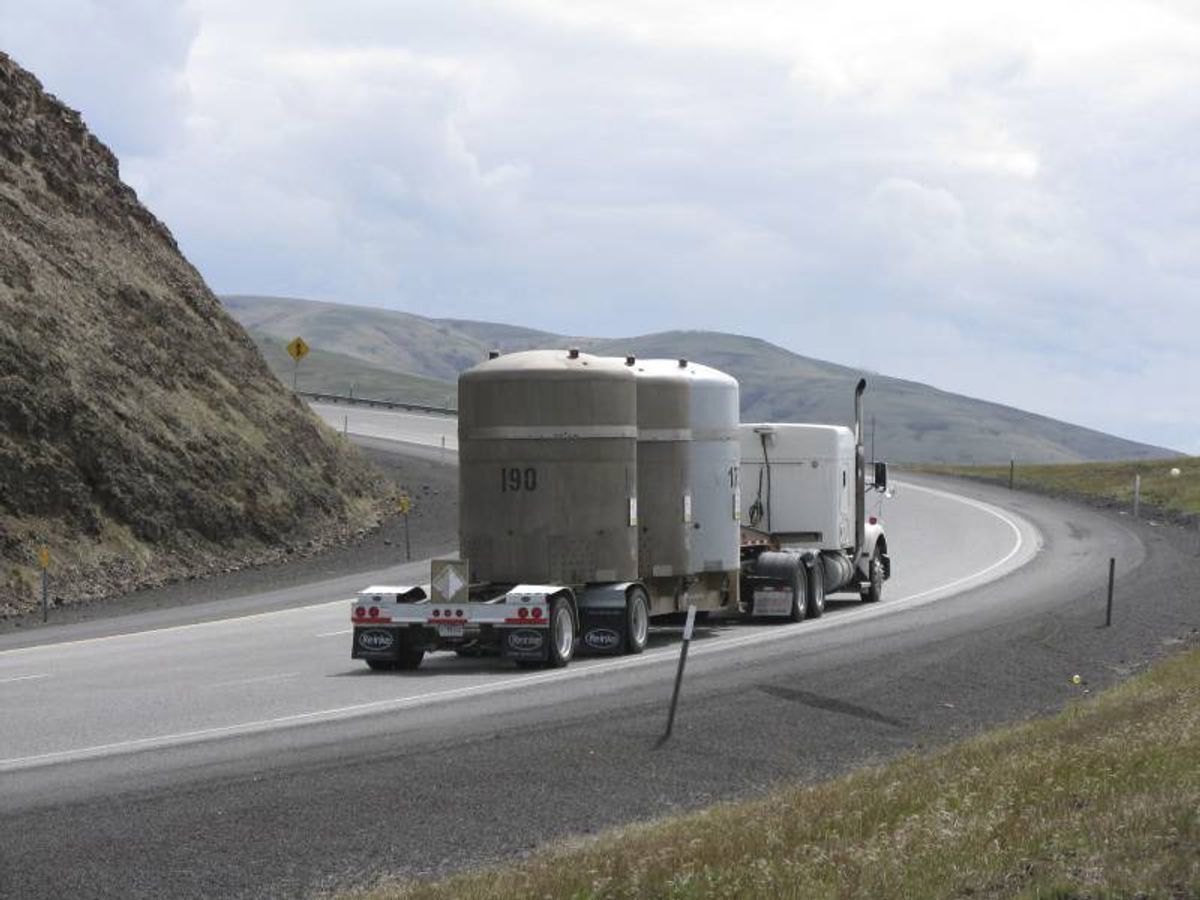 A transuranic waste shipment travels on an approved shipping route to the Waste Isolation Pilot Plant (U.S. Department of Energy)
--

The facility, housed beneath a 2,000-square-foot-deep salt formation, exists to store dangerous transuranic (TRU) waste from nuclear weapons research and testing operations -- things like clothing, tools and debris.  As the radioactive elements on the waste decay, the particles they emit can be harmful to humans if inhaled or ingested.

The leak was detected on Feb. 14, and the 139 employees working aboveground at the time were sent home after testing negative for skin and clothing contamination. But the preliminary results of biological testing indicate that 13 may have inhaled the radiation. No further information is available about how severe the health effects may be, or what medical treatment will be required. The AP has more on the situation at the waste site:

The accident is the first-known release of radiation since the dump near Carlsbad began taking plutonium-contaminated waste from the nation's nuclear bomb building sites 15 years ago. It came just nine days after a truck hauling salt in the plant's deep mines caught fire, but officials say they are confident the incidents are unrelated.

Officials said they can tell from their analyses of air samples in and around the plant that a container of waste leaked, but it could be weeks before they can get underground to find out what caused it. Possible scenarios include a ceiling collapse or a forklift puncturing a canister, Farok Sharif, president of the Nuclear Waste Partnership, said Monday before a community meeting in Carlsbad.

More than 250 people attended that forum, where Sharif and Joe Franco, the DOE site office manager, told sometimes skeptical residents that the elevated amounts of radiation that have been detected offer no more risk than a dental X-ray or an airline flight.

Still, Sen. Tom Udall, D-N.M., said he will send the Environmental Protection Agency a letter Thursday requesting that they bring portable air monitors to the area.

"The health and safety of the Carlsbad community and WIPP personnel are my top priority," Udall said.