Fox News gets something right about anti-LGBTQ discrimination: "In Arizona, you can do that now"

Tony Perkins is a bigot, but he's right about one thing: Discrimination is already the law of the land in Arizona 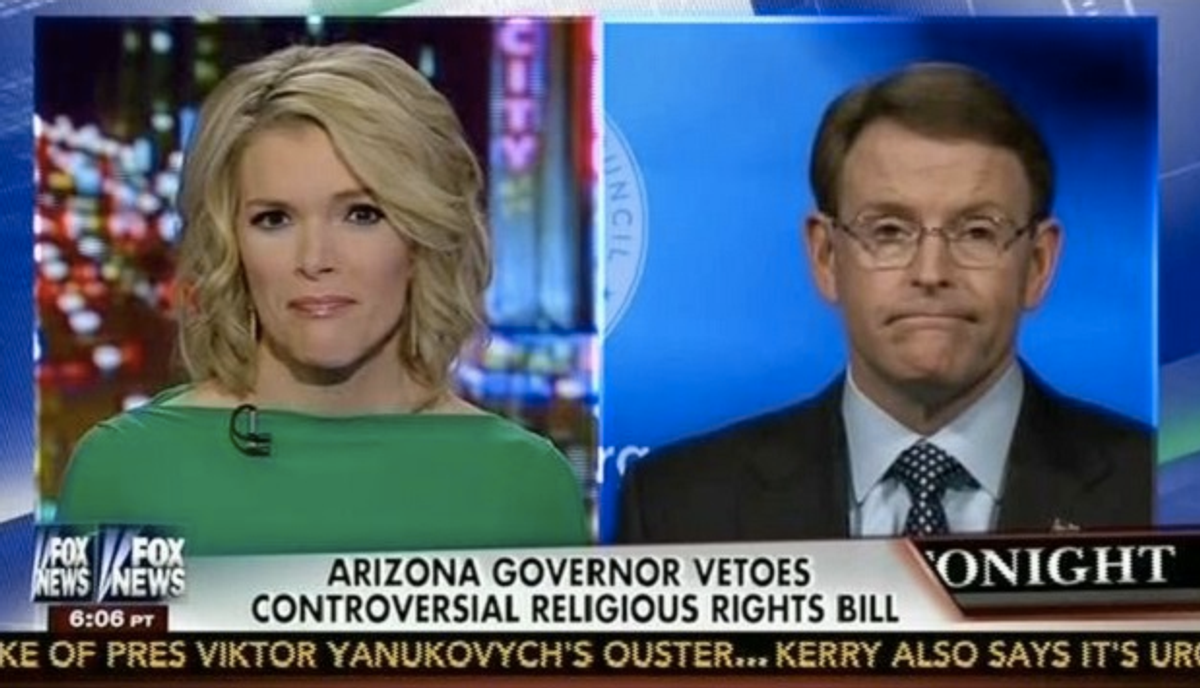 The conversation between Perkins and host Megyn Kelly was pretty canned, which is precisely what you get when you lob softball questions about discrimination at a homophobe. No surprise there.

But something interesting did happen during their exchange, and it's a point that has come up in a number of other interviews with supporters of the bill. Perkins told Kelly, flat out, that anti-LGBTQ discrimination and broad "conscience clauses" for business owners are already the law of the land in Arizona.

He's right. There are only three cities in the entire state with LGBTQ anti-discrimination statutes on the books. Discrimination based on "sincerely held" religious beliefs is fair game everywhere else.

In response to a question from Kelly about legal discrimination, Perkins replied that business owners in Arizona "can do that now ... There is no prohibition [against such discrimination] in most places [in the state]. In Arizona, you can do that now."

He then pulled out the same reference to a lawsuit in New Mexico against a wedding photographer who refused to work with a gay couple that others who support the bill have raised as the "dangers" of not having laws like SB 1062 on the books.

This, too, is pretty telling.

New Mexico state law holds gender and sexual identity as protected statuses under its anti-discrimination law. This was the basis for the lawsuit Perkins mentioned, the wedding photographer's violation of the state's human rights law. Arizona has no such law, which means that no such lawsuits -- except in the three cities with municipal statutes -- could ever materialize.

Basically, the critical mass around this bill was powerful and stopped an already bad law from getting worse -- but if securing basic rights for LGBTQ people is the focus here, it's important that the public maintain that focus when it comes to changing other laws in Arizona (and across the country) that make such discrimination perfectly legal.