Boxed in: The power of cramped spaces on "True Detective" and "The Walking Dead"

On both shows this week, production design gives us a peek into the characters' psyches 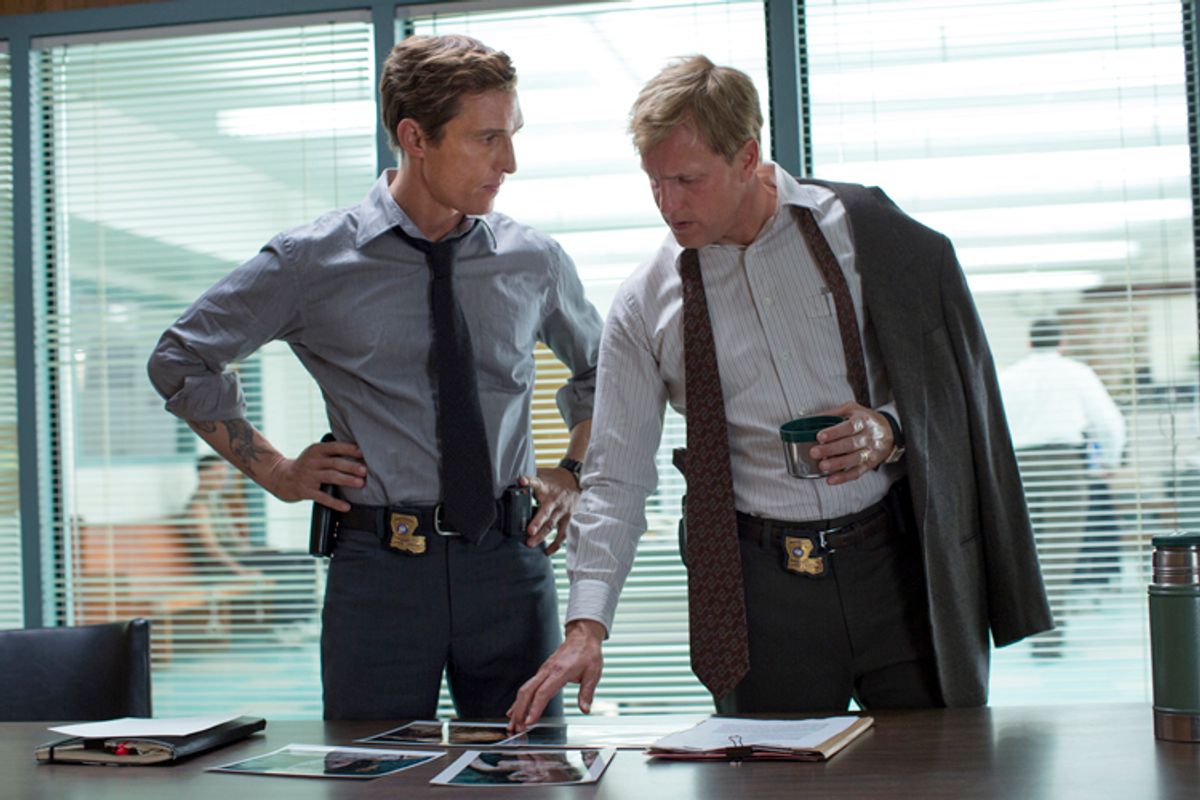 There is an ever-so-telling, darkly comic moment in the upcoming episode of “True Detective” in which Detective Martin Hart (Woody Harrelson) walks reluctantly into a cramped, sickly lit storage shed in the middle of nowhere. If you aren’t aware, the series spans decades, and this is the first time in at least one of those that Hart has been made privy to the inner processes of his obsessive former partner Rust Cohle’s (Matthew McConaughey) mind. Harrelson’s reaction is pitch-perfect – the bafflement, the wariness – but that performance would be pointless without the fine bit of production design that goes with along with it.

Cohle’s secret shed is like a window into his frontal lobe. Objects of the man’s obsession are taped or pinned to every available section of wall space – but not in a haphazard way. We’ve all seen war rooms and think tanks on television before – “The Wire,” “Scandal,” “Flashforward.” Typically, these dioramas are used as a way to illustrate the progress of an investigation. At their best – as in this case – they also serve to illuminate a character’s mental state.

Cohle may be a drunk, but he is still precise, meticulous and organized. His goals are clearly set apart and above all else. He knows what he’s working toward – so much so that anyone looking at his process might wonder if he’d arrived too hurriedly at a conclusion. Of course, this possibility has been hinted at earlier in the series: Some speculate that Cohle has been steering the investigation all along. As Hart eyes Cohle’s work all around him in this structured, claustrophobic setting, he must wrestle with that possibility. Later, contrast Cohle’s workspace with the office Hart rents to work out of – all white walls and room for doubt.

Recently, I suggested that “The Walking Dead” has been starting to feel a little repetitive. This Sunday’s episode is a bit of balm for those who happen to agree with me. The episode, which focuses on exiles Daryl and Beth, is a refreshing deep dive into the back story of two characters that are easily taken at face value. For the faithful, I will not spoil the forthcoming experience. I only advise that you all pay close attention to the manner in which production design and set dressing are used to draw out and develop character.

Near the beginning of the episode, the two voluntarily confine themselves to a space more constricting than even the prison in which they once lived. Trapped within, they don’t talk. They share nothing but fear and a few feet of elbow room. Once freed, they find their way to a place of former opulence -- a sprawling country club. It feels safe. It looks promising. But even before the world was overrun with undead, this was arguably a very superficial locale. Daryl, mute up until this point, can’t help expressing his disdain for their newest refuge. In the end, it has little to offer them.

The final location is the most powerful in terms of divulging back story. We learn about Daryl’s past through the way he relates to his environment – a rundown shack with only a cache of moonshine to show for itself. Never has the term “love-hate relationship” been more applicable to an empty house. Ultimately, they leave this place and its ghosts behind as well, with an impressive act of finality you will have to wait and witness.