7 absurd things America's kids are learning thanks to conservatives

With public education gutted, children are being taught that gun control is a gateway to tyranny and worse 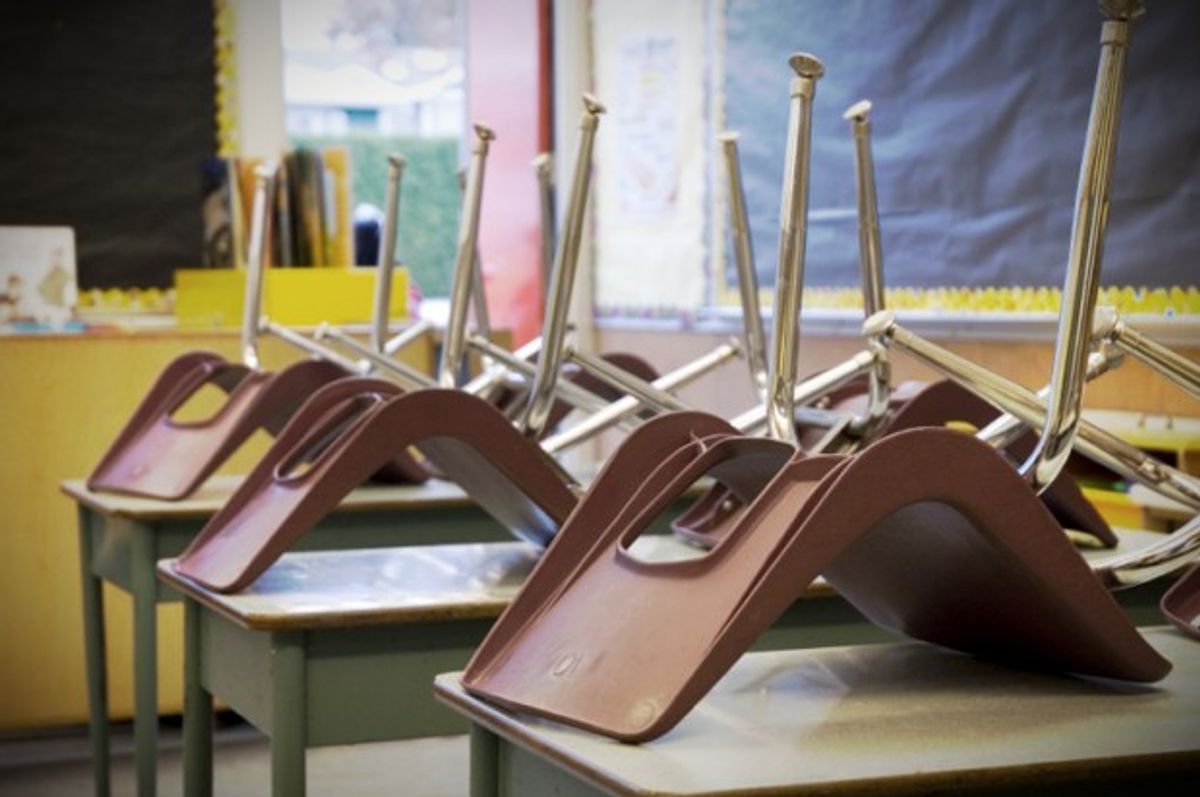 Conservatives are masters at using distortion and subterfuge to sell people on things they would never buy if properly labeled. Nowhere is this more evident than in the arena of “school choice” -- a conservative euphemism for "gutting public education from the inside out."

According to its major proponents, like the late Milton “Pinochet es mi amigo” Friedman, “school choice gives parents the freedom to choose their children’s education, while encouraging healthy competition among schools to better serve families' needs.” Sounds lovely! But, it turns out, there are plenty of well-documented problems with school choice, especially when it comes to the school voucher system, which provides families with public funds to send their children to private -- often religious -- schools.

Voucher programs in particular have been proven to be largely ineffective; they weaken the public school system, and fail to address inequality, which may be why their supporters, like the Koch Brothers, Americans for Prosperity and Dick Morris, love them. Through their concerted efforts, vouchers are on the rise: In 2013, 15 states started orexpanded their voucher programs.

Though supported with public funds, private schools engaged in voucher programs lack the accountability and oversight applicable to public schools, so they’re not subject to the whole separation of church and state thing that forms the backbone of of American democracy. Given that, it seems fair to wonder: What kinds of lessons are our tax dollars supporting at these schools spared the scrutiny of Big Government and the burdens of the Constitution?

To find the answer, I dug into the catalog of one of the biggest publishers used by religious voucher schools: a company called A Beka Book. A Beka Book is one of the three most widely used Protestant fundamentalist textbook publishers in the country, along with Bob Jones University Publishing, published in Greenville South Carolina, andAccelerated Christian Education, published in Lewisville, Texas. Forty-three percent of the religous voucher schools that responded to a 2003 Palm Beach Post survey based their curricula on either A Beka or Bob Jones. A Beka Book estimates that 9,000 schools use its books in the classroom.

Founded by Arlin and Rebekah (Beka) Horton in 1972, A Beka Book provides “excellence in education from a Christian perspective.” Since 1977, A Beka Book has operated out of the unaccredited Arlin-founded Pensacola Christian College (PCC) in Florida. Among other rules, PCC has a zero tolerance policy for “optical intercourse” or staring too intently into the eyes of a member of the opposite sex (also known as “making eye babies”).

Though the publisher won’t reveal its finances, over the years, sales from A Beka Book have paid for PCC’s construction projects ($300 million) and annual scholarships ($2 million). Though the publisher used to enjoy a tax-exempt status, that privilege was revoked in 1995 because the company was (surprise!) found to be a profit-making entity. In 1998, A Beka Book paid the IRS an estimated $44.5 million to “remove any question as to our Christian responsibility in the matter of back taxes."

The Hortons are as rigorous intellectually as they are ethically and fiscally. Here are seven invaluable lessons children learn from their A Beka Book texts, thanks in part to your tax dollars.

The publishing company boasts that, “Unlike the ‘modern math’ theorists, who believe that mathematics is a creation of man and thus arbitrary and relative, A Beka Book texts teach that the laws of mathematics are a creation of God and thus absolute.”

The great news for people like me who don’t really enjoy math is that A Beka Book provides “traditional mathematics texts that are not burdened with modern theories such as set theory.“ It’s unclear why the branch of mathematical logic that studies sets and is considered to be a foundational system for mathematics is so anathema to God. I assume focusing on the “union of sets” encourages too much premarital coupling and promiscuity.

2. Critical Thinking: There’s a Mnemonic Device For That

A Beka Book’s Health in Christian Perspective textbook makes it extremely clear that there is one and only one “Christian World View.” In that view, abortion—defined as "the killing of babies before birth”— for example, is a sin. But A Beka Book doesn’t just tell students what to think, it empowers them to think for themselves by employing the all-important "Biblical Discernment" method.

Like so many of  Beka’s critical thinking tools, this one comes in the form of a mnemonic device: “Use the DISCERN method,” Beka instructs, “to determine whether abortion is biblical.” The method allows students to make an informed godly choice around any issue, not just abortion. Once they've figured out whether something is biblical or not, they can engage in it and praise it, or refrain from doing it and condemn it. Here’s how DISCERN works:

This handy mnemonic is great for moralizing and judging on the run!

3. Science: Yahweh or the Highway

“A non-Christian world view is any one that is based on the belief that there is something more reliable than the bible. The belief may come from church traditions scientific conclusions, or various theories. The most important teachings to be found in a  Christian World View are... God made the world and everything in it; The world has fallen into a tragic state because of sin; and God is working to redeem this world to Himself.”

Science that contradicts these notions, the people at A Beka Book explain, is just plain wrong. “These three teachings should influence your interpretation of any facts you study,” they note. “And if you are serious about being a Christian, they must color your view of scientific thinking.”

Also crucial is the instruction not to stray from God’s path by using science to help people. “Others may be curious about the world of nature simply because they want to improve the lives of other humans. Although Christians should also be interested in that, they should mainly be interested in loving God through the study of nature." I wonder if the Hortons want their doctors to prioritize loving God over helping their patients?

4. Guns: Our Only Protection from Nazism and Globalism

Beka’s United States History—Heritage of Freedom In Christian Perspective reminds us that the men who founded this great nation would totally oppose background checks: "The founding fathers... understood that unarmed citizens would not be able to stand against a tyrannical government.” Gun control, according to this text, is simply a "gateway to tyranny." The book’s exhaustive analysis of world history backs up this brilliant assertion: "A study of Hitler's, Stalin's and Mao's ideas on disarming their citizens shows... they were well aware of the concept that control thrives when people are unarmed."

As an added bonus, guns are also a way for America to fight against creeping... globalism: "Armed citizens could also play a major role in thwarting Globalism, the idea to bring the world together under 'one global government.' making the constitution null and void." This really speaks to America’s youth, who are nothing if not extremely concerned about globalism.

5. The Death Penalty: The Sanctity of Life Manifested

America: Land I Love In Christian Perspective laments that the death penalty, and thus the sanctity of life, have become less hip. Back in the good old days, “because people believed in the sanctity of human life, most states practiced capital punishment.”

A Beka Book knows what God was thinking when he killed people for crimes like prostitution, bearing false witness, and not crying out while being raped (if you are betrothed): “Most people believed God instituted capital punishment to discourage murder and to teach mankind the value of human life.”

Of course, “most people” doesn’t include people who opposed the death penalty. Like Jesus Christ.

6. STDs: What Happens When you Disobey God

Beka’s Health In Christian Perspective text also teaches that sexually transmitted diseases are caused by sacrilegious behavior: “Disobedience to God’s Word in the area of sexual purity can also lead to disease.” And statistically speaking, A Beka Book tells us, it is almost impossible to contract diseases from a spouse:

“Some infections, known as... STDs,  are almost always spread by direct bodily contact during illicit sexual relations (sexual relations outside God’s institution of marriage). People who live according to God’s standards of waiting until marriage to have sexual relations are very unlikely to acquire venereal diseases.”

There is no correlation, in the Beka world view, between “sex education” and preventing STDs, because such diseases aren’t caused by “a lack of scientific information or ‘sex education’ but a lack of morality and righteousness.” While A Beka Book neither believes in nor provides any “sex education,” they do offer a lifesaving “Personal Checkup” checklist, encouraging students to check boxes for things like, “I wash my hands thoroughly on a regular basis” and “I obey biblical principles regarding morality, self-control, attitude, and anxiety.”

In other words: Every time there is violence on the screen, or a man is mocked by a feminist, or a heathen cracks up over sin, a homosexual is recruited and a family is attacked. But you already knew that.

This is but a mere sampling of A Beka’s righteous lessons. Check back soon for more.