A world without Elizabeth Warren: Why attacks on today's Democrats miss the mark 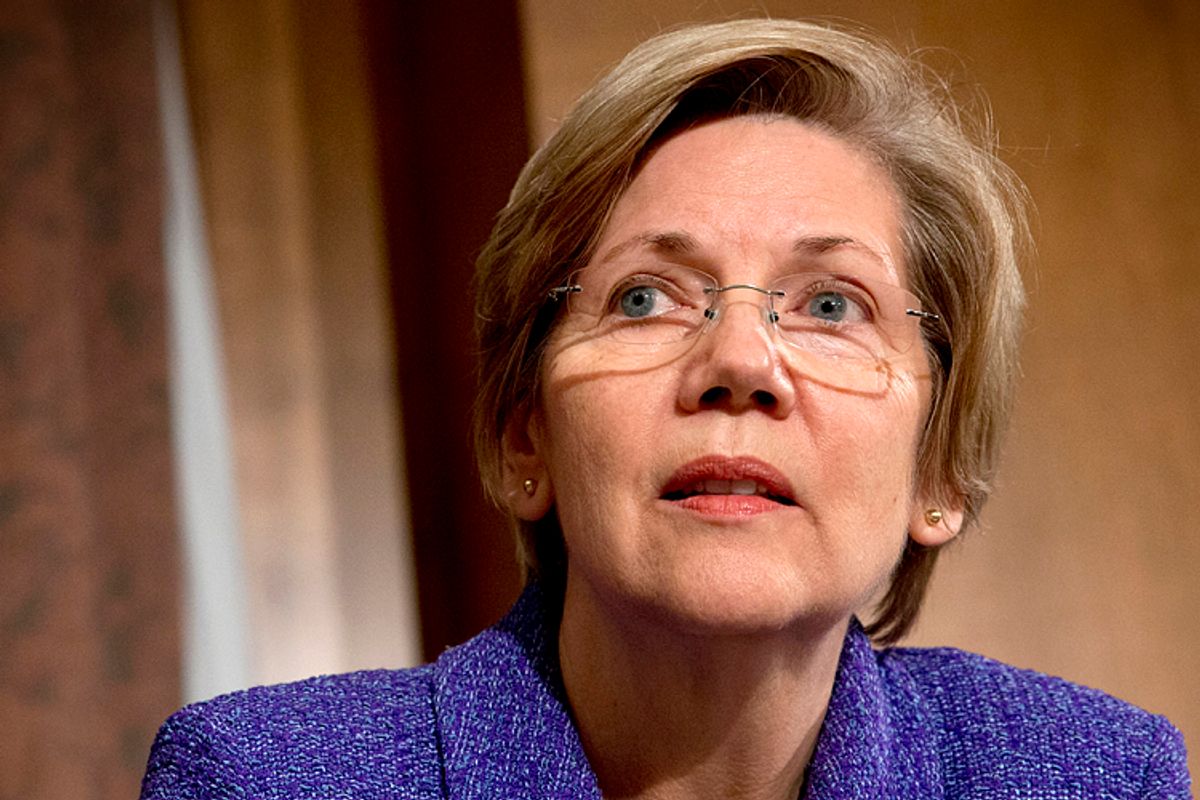 I’m late replying to Adolph Reed’s depressing Harper’s cover story, “Nothing left: The Long, Slow Surrender of American Liberals." (It's in Harper's, so it's not online, but Michael Winship has a smart overview here.) I’ve frankly resisted it, because Reed hits themes I’ve covered often, and a lot of the reservations I have about the piece have been expressed well by others. Harold Meyerson brought Reed up to date on genuine examples of populist energy within and outside of electoral politics, from fast food worker strikes to, yes, the elections of New York Mayor Bill de Blasio and Massachusetts Sen. Elizabeth Warren (neither leader is even mentioned). Reed’s piece would have been more resonant, say, in the summer of 2011, after the depressing debt-ceiling showdown that President Obama, at least partly, brought on himself. Progressive politics is more encouraging today.

Michelle Goldberg, meanwhile, did a good job refuting what she calls Reed’s “electoral nihilism” -- he voted for Nader in 2000 and famously sat out 2008 -- that denies or downplays differences between Republicans and Democrats. Reed is, to put it mildly, not an admirer of Barack Obama, and he’s been a persistent African-American critic of Democrats who put identity politics before economic populism. I often agree with Reed on that point, while wishing his take on Obama and his Ivy League African-American supporters was a little less acerbic and absolute. But then he wouldn’t be the formidable Adolph Reed.

Still, I think that in my knee-jerk response to Reed, and that of other progressives – to defend genuinely populist Democrats, decry Republicans and point to green shoots of life in progressive organizing – we risk missing some of his bigger points that are undeniably true and important. So before taking on a couple of things I think he gets wrong, I want to consider some of what he gets right.

Certainly he’s right that neoliberalism and corporate centrism captured the Democrats in the 1980s and '90s and made it easy to downplay differences between the two parties. It is undeniably true that Democrats have become much more united on issues of racial diversity, gay rights and women’s freedom than on economic populism. All of these issues matter, of course, and yet – as I wrote about Jan Brewer’s capitulating to business pressure and vetoing the anti-gay SB 1062 last week – our failure to make the same progress on economic equality is troublesome. It’s not because left-wing Democrats haven’t tried to make progress on those issues, although it could be argued they haven’t tried hard enough. It’s also because the party is genuinely split on such issues, and the Wall Street wing has been ascendant for too long.

And while I’m more tolerant of incrementalism than Reed is, he’s also right that the left has had a hard time articulating its larger goals and dreams about what a just society would look like. The progressive movements of the 20th century gradually, and then quite decisively, expanded the realm of freedom and opportunity for working people and, more broadly, for people who weren’t wealthy. It used government to assure rights that had been trampled.

In their haste to appease an ascendant right by acknowledging that there were things government didn’t do well, liberals were too quick to ignore what government did right. There is a need to articulate a larger 21st century vision of how government can and must reverse the concentration of wealth and power at the very top – beyond raising the minimum wage.

I’m with Reed on the imperative to organize around a new push for universal free higher education. I’d like to see it start with a movement to renegotiate, reduce and even forgive the trillion dollars in student loan debt that’s crushing the younger generation. The commitment to expanding access to higher education beyond a wealthy few was one of the engines of prosperity and greater equality in the '50s, '60s and '70s. Instead we fight over how high student loan rates should be, when it’s in fact unconscionable that the children of the age of mass higher education are now saddling their own children with crushing debt.

Finally, I agree with Reed that it’s impossible to imagine a revival of a mass movement for economic equality without an invigorated labor movement. It won’t look like the movement of the 19th and 20th centuries, but there is no other institution that can articulate, advance and organize folks behind a renewed commitment to economic justice. Progressive organizing from the Great Depression through the early civil rights movement quite explicitly placed the labor movement at its center, because for all its flaws, it was the engine for mass organizing on those issues.

Yet the fact that Reed ignores the progress that’s being made on all of those fronts blunts his argument. Progressives have gotten much more comfortable articulating a role for government in both regulating corporate behavior and leveling the playing field for the rest of us. Reed's world is one where Elizabeth Warren doesn't seem to exist. Now, he might dismiss Warren’s proposal to restore postal banking services, to help moderate-income people have bank access without being gouged, as small bore. He might not be impressed by her (and others') calls to strengthen and expand, not cut, Social Security. We don’t know, because he doesn’t talk about those developments.

Likewise he mostly ignores the growing and productive tension within the Democratic Party on these issues, and the victories of progressives. In an interview with Bill Moyers, Reed caricatured the two parties as “a neoliberal party that’s progressive on multiculturalism and diversity issues, and a neoliberal party that’s reactionary and horrible on those same issues.” That both minimizes the importance of “diversity issues” as well as the genuine differences between Democrats and Republicans. He notes that Richard Nixon was better for labor than either Obama or Bill Clinton, but there are no Richard Nixons in today’s GOP. Bill Moyers observed that while Reed rightly laments Obama’s new fast-track trade deal, both Senate Majority Leader Harry Reid and House Minority Leader Nancy Pelosi have come out against it. There’s a new feisty populism even among Democratic leaders, not just the rank and file.

I also don’t see cowed, lesser-of-two-evils voting being as prevalent among progressives as Reed does. He ignores new organizing on behalf of progressive primary challengers to corporate Democrat incumbents. Though it wasn’t successful, labor took on anti-labor Arkansas Sen. Blanche Lincoln, outraging some in the White House.

Reed’s take on the women's movement particularly irked me. There's essentially one throwaway line: “goals have shifted from practical objectives such as comparable worth and universal child care in the 1980s to celebrating appointments of individual women to public office and challenging the corporate glass ceiling.” Somebody’s really not paying attention here. What’s in fact striking about recent organizing among women is the extent to which a populist economic agenda now animates groups that once worked more narrowly on issues of, say, electing women to higher office or protecting their reproductive rights. Late last year Planned Parenthood, Emily’s List, SEIU and the Center for American Progress teamed up with House Democratic women behind the “Fair Shot” campaign, to push an agenda of paid family leave, a higher minimum wage, greater rights for home health workers and other reforms that would particularly help low-wage workers – including “comparable worth” (now known as pay equity) and universal child care.

Again, many of these reforms are incremental, and the easy ones are likely to be picked off while the transformational ones languish, but it certainly represents a departure from the corporate boardroom feminism Reed stereotypes.

But my biggest issue with Reed isn’t just with Reed: It’s with the larger left that denies differences between the two American governing parties and looks for salvation from third-party insurgents like Ralph Nader. It’s not that everyone should subsume their goals to electoral politics – there’s plenty of room for outside issues organizing. But if people are going to do electoral work, it would be wonderful if they acknowledged that our eccentric system of government makes it almost impossible for third parties to thrive.

The left would be stronger if it did what the right did, from the 1960s through today’s Tea Party, in organizing to take over the GOP. I’ve often lamented that the Occupy movement didn’t become a force pulling the Democratic Party left as the Tea Party pulled it right. Corporate Democrats won control over the party at least partly because too many people handed it over to them rather than fighting for it. Reed's pontificating from a distance is at least partly to blame for the problems he correctly identifies.