Why does Andrew Cuomo seem to get along better with Chris Christie than with Bill de Blasio? 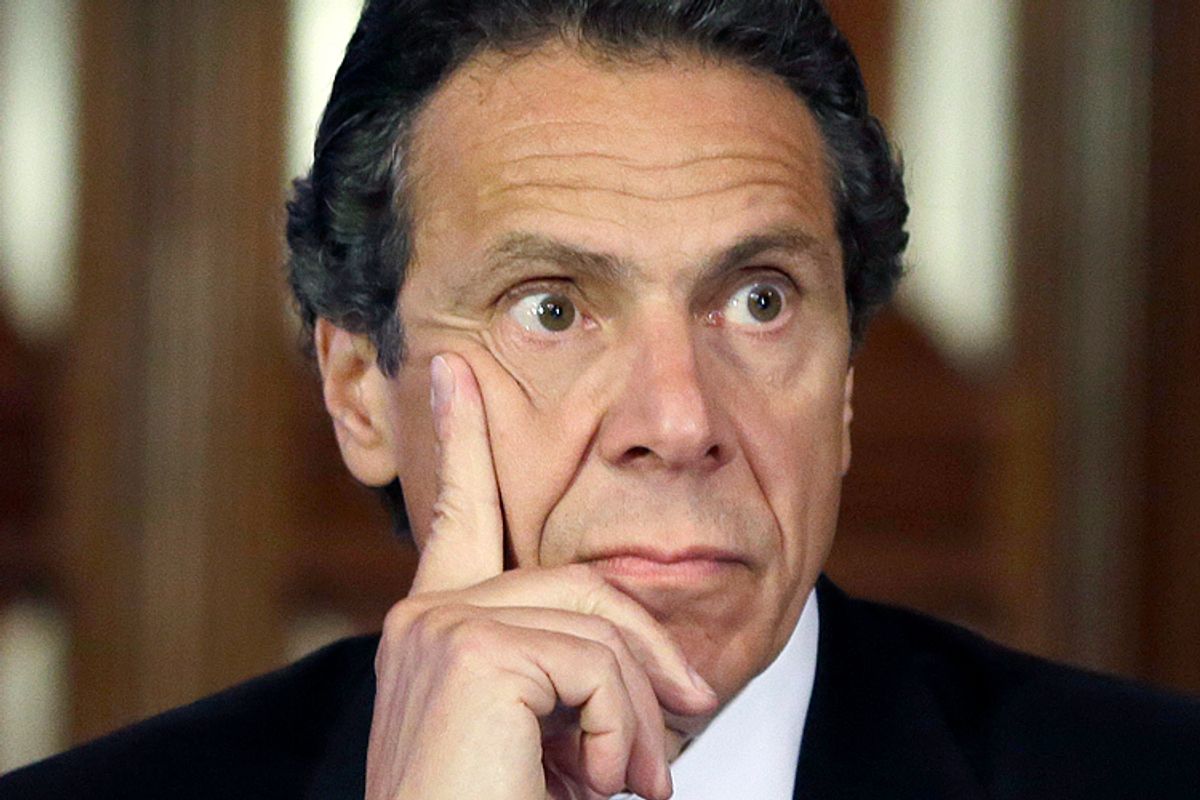 New York City Mayor Bill de Blasio went to Albany this week, to lobby state lawmakers to allow him to implement the tax-the-rich proposal that helped get him elected last November. He met Tuesday with Gov. Andrew Cuomo, a fellow Democrat, the son of a legendary liberal New York governor, and an oft-discussed possible 2016 Democratic Party presidential nominee. The two claim to be old pals. Cuomo celebrated de Blasio's visit by attending a pro-charter school rally and explicitly praising the charter school organization run by an avowed de Blasio political enemy. (That organization, Success Academies, closed all its schools Tuesday and bused students to the rally in Albany.)

Cuomo's appearance at the rally seemed a bit like an attempt to undermine the mayor's big Albany trip, especially as de Blasio was having his own rally at the time, for his pre-K plan. De Blasio wants to fund pre-K programs for New York City children (and after-school programs for middle school students) through a (very purposefully) redistributive millionaire's tax. This was an idea a lot of New Yorkers seemed to approve of. Not long after de Blasio was elected, Gov. Cuomo suddenly introduced a plan to fund pre-K programs statewide, through the state budget, without raising taxes. This seems much more likely to pass in Albany, where Republicans control the state Senate. Cuomo's plan would, obviously, only fund New York City's programs at the discretion of state lawmakers, a fairly suburban and upstate bunch.

This is Cuomo's governorship in a microcosm. He outflanks the left, and exerts himself only in defense of the centrist and broadly popular. While he made big, highly publicized moves on gay marriage and gun regulations, Cuomo campaigned (and governed) as a tax-cutting pro-business New Democrat, and he's been almost totally absent on most of the economic issues that various liberal Democratic governors around the country have begun pushing for. Last month, he shot down Mayor de Blasio's plan to raise New York City's minimum wage, arguing that it doesn't make sense to allow municipalities within a state to set their own minimum wages. (In fact, something like the exact opposite is true. Rent tends to be a bit higher in Manhattan than in Troy.)

He's also bad -- comically bad -- on transit. Like, "did city bus ran over his dog at some point" bad. Most politicians, even in transit-heavy regions, are happy to neglect transit in favor of addressing the needs of drivers, but Cuomo makes it an art.

This is the governing style of a politician who feels he has no reason to fear irking the city's liberals, and who therefore focuses mainly on appealing to and delivering for other constituencies. The Staten Island toll reduction was a blatant ploy to win over residents of the only portion of New York City that could be described as conservative. Bronx residents are unlucky enough to be habitual Democratic voters (or non-voters), and so they will have to continue to settle for the reduced transit service the MTA introduced four years ago. This is all rational, if not particularly principled. To put it in nakedly demographic terms: Statewide, minority voters make up just about 30 percent of the electorate, and white Catholics make up about 35 percent. Cuomo is not worried about minority voters abandoning him for a moderate-seeming Republican challenger. The white Catholics, though?

Cuomo is up for reelection this year. Curiously, he is currently working to make sure Republicans nominate a moderate-seeming Republican to oppose him. There is a depressingly credible theory going around that he is doing this because he is confident he can beat any challenger, but he's worried that an extremist opponent would depress moderate Republican turnout, thus imperiling the Republican state Senate majority he prefers to work with. (It is not actually a real Republican state Senate majority, because voters did actually elect more Democrats than Republicans, but a few particularly craven Democrats jumped ship to caucus with the GOP in a backroom deal that some people also think was orchestrated -- or at least condoned -- by Cuomo.)

There is plenty of evidence of Cuomo's attraction to working with Republicans. The area elected official whom Cuomo seems to work most comfortably with is not the new mayor of his state's biggest city, but rather Chris Christie, the Republican governor of New Jersey. Cuomo, like many Democrats, did nothing in particular to help Christie's challenger in the last election. Christie has reportedly described himself as in agreement with Cuomo on "98 percent of the issues." The two worked closely together following Hurricane Sandy. Both were useful to the other in burnishing bipartisan cred, allowing both men to define themselves as above partisanship and focused on "results." Of course, one result of Cuomo getting along so famously with Christie is that he allowed Christie to pack the Port Authority, a bi-state agency with an enormous amount of power and influence, with unprincipled political hacks loyal first and foremost to Christie, while Cuomo effectively neglected the agency and seemed to allow Christie to use it as a giant instrument of patronage.

As the bridge scandal blew up in the press, Christie called Cuomo to complain that Cuomo's appointee was pushing too hard to get to the bottom of it. The two had worked together on Port Authority issues before, according to this bombshell Star-Ledger story. Multiple former Port Authority officials tell the paper that Christie and Cuomo were in on a scheme to avoid political responsibility for bridge and tunnel toll hikes and PATH train fare increases. The Port Authority first announced massive, shocking toll and fare hikes. The governors acted shocked. They then sat down with the Port Authority and got them to agree to much more reasonable toll and fare increases. Obviously, the first, announced increases were for show, to allow the governors to look like they won the more modest increases that had been agreed to in advance.

This plan was thought up, the officials claim, by Bill Baroni and David Wildstein, Christie's Port Authority goons. One former Port Authority official also tells the paper that the New Jersey assemblyman investigating Christie's Port Authority could find emails implicating Cuomo with a subpoena. "[He'll] find the emails between Baroni, Wildstein and the governor’s office. And he’ll also find emails between Baroni and Cuomo’s office." Another truly heartwarming display of bipartisanship from Gov. Cuomo.

The drama playing out in New York has consequences for the rest of the nation. Commentators hailed de Blasio as a representative of the resurgence of the economic left in the Democratic Party. But Cuomo actually has final say on New York City's economic policy, and he's still operating according to the money-friendly New Democrat playbook. Certain interests would be thrilled with a Republican Party made up primarily of Chris Christies working hand-in-hand with a Democratic Party made up primarily of Andrew Cuomos. Cuomo now seems, clearly, much shrewder than Christie. That makes him more worrying.