The ballad of "Bitcoin Jesus": The tech millionaire who fears for his life 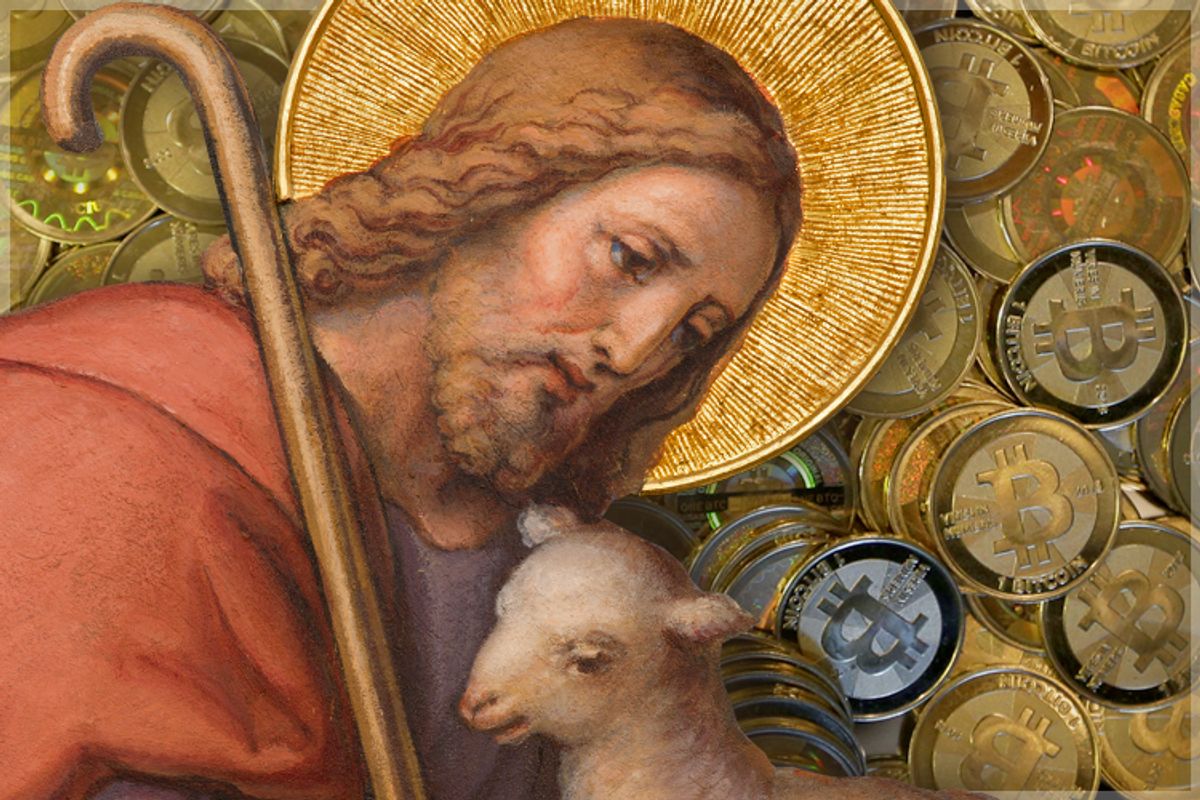 I have sworn not to write the name of the island where Roger Ver is currently residing, the reason being that he fears for his life.

It is the second time we have spoken in four weeks, and this time his anxiety is palpable. It leaps through the phone. Ver talks about his future the way a revolutionary might: uncertain and littered with likely chances for wrongful imprisonment or assassination. He won’t start a family, he tells me, because a child’s father should “be there” — and he fears that he won't.

Ver and his his partner of two years, Ayaka, have been lingering down in the Caribbean for several weeks now, ever since he first began to seek economic citizenship, on one of the islands (a maneuver necessary before obtaining full citizenship). That was granted weeks ago, and now he wants to renounce his U.S. citizenship as well.

Ver is a legend in the Bitcoin community, known as the “Bitcoin Jesus” for his tireless evangelism of the virtual currency. He is not Bitcoin’s only voice, but he is quickly finding himself the last man standing. Newsweek rocked the Bitcoin world this week when it claimed to have identified the elusive founder of the currency, Satoshi Nakamoto -- who, it turns out, is an elderly Japanese man by the same name, living in plain sight in California. That led to a high-speed freeway car chase, and a slew of commentary (including from Salon’s Andrew Leonard) suggesting that the unmasking of Nakamoto is the last nail in the coffin for a currency beleaguered of late with scandal. Ver doesn't buy it.

“Pretty much for sure it’s not him,” says Ver, who claims he has never met Nakamoto. “If you read the posts on Amazon.com product reviews written by the Newsweek Satoshi, and of you read the actual white paper written by the actual Bitcoin Satoshi it’s really really clear it’s not the same person." Will the world ever know the real Nakamoto, I ask.

The Nakamoto saga comes on the heels of a string of public relations fiascoes that have blackened Bitcoin’s image. Now the currency -- whose value has fallen nearly 30 percent in the past month, to around $650 per unit -- finds itself fending off image erosion on both flanks. On the one hand, there's its close association to a now-indicted kingpin with links to an underground network of hit men. On the other hand is the perception that Bitcoin is merely a speculative bubble, like the Dutch tulip craze.

In a sting operation last year, the FBI arrested Ross Ulbricht, the alleged mastermind behind Silk Road, an illicit marketplace for unsavory and illegal things. (Ulbricht is charged with, among other things, the torture and assassination of rivals.) Shortly thereafter came the arrest of Charlie Shrem, the CEO of a Bitcoin start-up financed by the Winklevoss twins, who (according to Department of Justice authorities) sold over $1 million of the digital currency to drug dealers on Silk Road. It didn't help matters that Shrem was the vice chairman of the Bitcoin Foundation.

This month came the biggest hit yet: The Lehman-like collapse of Mt. Gox, a virtual bank for the currency, exacerbating Bitcoin’s P.R. problem at the worst possible time. (Ver estimates he lost over $1 million.)

I first made contact with the entrepreneur earlier this year, through Twitter; then began exchanging information over email, before finally conducting a lengthy interview with him over Skype. During that conversation, I learn that Ver and his partner are living at a mid-range hotel on one of the world’s bluest beaches, where there is a swim-up bar and old ladies who sell handmade floral-patterned shirts under the banyan trees. The tourists congregate by half past 5 each winter night to watch the sunset. He is on the Caribbean side of the island. I know this because – strangely -- I have stayed at this particular hotel before, more than decade ago, when my college swim team visited the island to train. Not exactly the trappings of a Bitcoin millionaire.

“What a long, long road this has been,” says Ver, who explains the frustrations he's encountered in denouncing his American citizenship. “I tried to make an appointment with the U.S. embassy in Tokyo several weeks ago. They told me that the soonest they could fit me in was March 19. I didn’t want to wait that long, so I wound up getting an appointment four days ago ... I went there with all the paperwork in order, ready to renounce. They told me I am not allowed to renounce yet and I need to have a cooling off period to think about it, if it’s something that I really want to do -- which to anybody who knows me knows that I have been considering this for a long time.”

Whenever he is speaking, Ver’s discontentment with America is in plain view, unfurling itself in unintentionally humorous ways, as when he portrays his current predicament:

“The U.S. is making it extremely difficult for me to stop being American.”

The discontentment is also there when he talks about the first time he was arrested, at 18, for staging a protest against tax day in his town’s postal center. And it’s there when he refers to his eight months in federal prison, more than a decade ago, for selling firecrackers on eBay without a license.

I wonder: Why does anyone decide to cease being American? “It’s just incredibly inconvenient,” Ver says. “It’s dangerous to travel to certain places, and the U.S. government uses all the money I pay them to kill people around the world. I am not interested in participating in that type of system.”

However, the anger in Ver’s voice whenever he speaks about authority figures or governments slackens entirely when he begins talk of Bitcoin. His excitement registers as quickness in his speech.

“Bitcoin is amazingly transformative," Ver expounds, "because it’s the first time in the entire history of the world in which anybody can now send or receive any amount of money, with anyone else, anywhere on the planet, without having to ask permission from any bank or government. Nothing like that has ever existed before in the history of the world. The only way to stop this now would be to turn off the Internet and keep it turned off.”

"Bitcoin Jesus" first came into public view last year when he gave the largest ever charitable donation in the currency -- $1 million -- to the Foundation for Economic Education, a nonprofit closely associated with libertarianism. Founded in 1946, FEE notably opposed the Marshall Plan, Social Security and minimum wages. A strain of libertarianism runs through Ver's own personal philosophy: “If there is no victim, it shouldn’t be a crime,” he says. “I like to call myself a voluntaryist.  That means that I think that all human interaction should be on a voluntary basis.  And that nobody should be able to use force or fraud in any human interaction whatsoever.”

Ver’s voluntaryism – a kind of hyper-liberatarianism -- seems rooted in his childhood, which he recounts with a hint of mythologizing: He was born to “Christian fundamentalist” parents in San Jose, although he hasn't spoken to them in over a decade. His father kicked him out of the house when he was 16, Ver explains, when he nearly succeeded in having his father arrested for grand theft auto.

As the story goes, entrepreneurship was an important part of Ver's life from early on: He started selling candy bars in junior high, pocketing $50 per week. By high school, he began to earn real money, and purchased himself a white Ford Mustang. His parents disapproved of the purchase, and when his father placed an ad in the local paper to sell it, Ver says he called the police — who told his father that they would arrest him if he did not withdraw the ad.

Ver went on to start a business, Memory Dealers, a kind of wholesaler for computer parts that made him a millionaire by his 30s. Then along came a surprise that changed his life: Bitcoin. He was eating a bowl of Wheaties in late February 2011, alone in his kitchen in San Jose, when, as he was listening to a podcast about the currency, suddenly interest in it “swept all over” him.

“I didn’t leave the house for over a week and just had food delivered. I only slept maybe one or two hours a night for over a week," he explains. "After a week of being on this Bitcoin binge, I got so sick I had to call my friend to please come help me to the hospital.” His obsession with Bitcoin had threatened to kill him.

That spring, he made his first investment in Bitcoin -- $25,000 -- when they cost around $2 each. That was followed by even more transactions. By summer, the price of Bitcoin had exploded to $30. By August, Ver was a Bitcoin millionaire.

These days, Ver lives as much as he can off of Bitcoin. Plane tickets. Hotel bills. Even the odd haircut. All Bitcoin. He keeps a home in Tokyo and another in the Caribbean. He is growing concerned about his safety. He is sympathetic to Ulbricht, the indicted Silk Road honcho.

“I think [he’s] actually a hero for setting up the Silk Road and doing that sort of thing.  I don’t believe the government accusations that he was trying to hire a hit man; especially that he was offering to pay the hit man by a wire transfer.  To me it seems absolutely impossible. And I suspect what was going on there is the government wanted to have his character assassinated there. Because if they just had arrested him solely for selling drugs and for setting up the website, and not having conspired to have anybody murdered, I think he would’ve quickly become a folk hero and people would’ve rallied to his cause. And that’s why they added all those murder for hire charges to that.”

Ver believes federal agents could swoop in and smother his future with conspiracy charges. “For the most part, if the U.S. government really wants to get you they are going to get you. So hopefully they should focus on things other than me. But it’s a real fear.” He pauses. It’s sunny today in [redacted], and we are almost out of time. “I don’t think I am likely to be assassinated, but I worry about being sent to federal prison for some sort of made up charge for a crime where there is no victim.”

In the end, there is the hope from Ver that sticks with you. It’s wild-eyed optimism, utopian perhaps, but irresistibly positive. I want to believe him. I want him to be right. It is gospel for some in these digital times. “I think examples of free market transactions between peaceful people using Bitcoin and the Internet,” says Ver, “I think it’s a wonderful thing. It’s going to make the world a better place.”